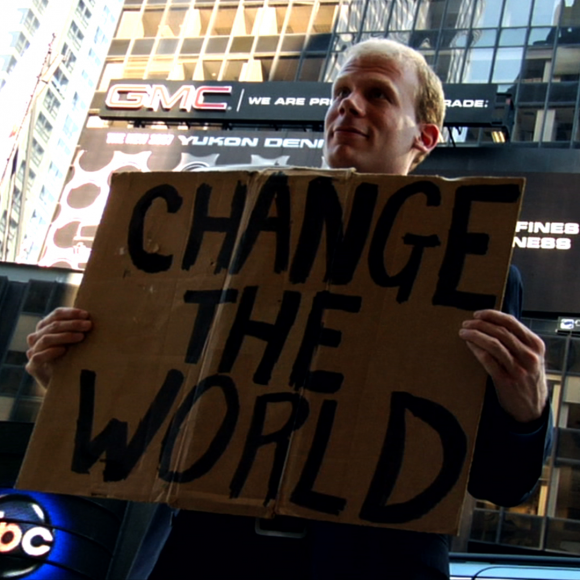 Tickell plans to work with the school to provide a free screening of the documentary to New College students.

New College alum Josh Tickell (’03) is the director of a documentary on his alma mater which may be entitled “The New College Experiment.” Tickell began the film because he heard that the New College Alumni Association and Foundation were searching for something to show at the 50th anniversary weekend. “I just thought, ‘That’s something I could do,’” Tickell said during an interview with the Catalyst.

Tickell started out his academic career at New College studying Economics, Spanish and German. However, he eventually created his own major, Sustainable Living. After New College Tickell received his MFA in Film from FSU’s School of Motion Picture Television and Recording Arts. He now lives and works with his wife and producer of his films, Rebecca Harrell, in Santa Monica, California. Their production and marketing company, Green Planet Productions, also handled Tickell’s film FUEL which won the Sundance Film Festival Audience Award for Best Documentary in 2008.

As of now the film is about 95 percent complete. Tickell recently traveled to Sarasota for a film shoot in addition to the shoot they had during last academic year’s graduation weekend. For Tickell, the visits were nostalgic and impressive. “A lot of alumni will say that New College isn’t the same and has lost its spark,” Tickell said. “They have this idea that when they went here it was better. For me, now that I’ve seen all the incredible things and opportunities that students here have now, I’m jealous. It made me want to go back to college.”

Two New College students helped with filming while the crew was at New College. In addition to the students, there are 10-12 people working on the documentary. Tickell’s website describes it as, “a film on alternative education at New College and a documentary that deals with world population issues.”

Tickell and his crew build their documentaries around interviews. Most of the filming that they still need to complete is of interviews with educational experts in California. “Typically the background of the film is based on interviews,” Tickell explained. “Often viewers want to know why we interviewed the people we did. We put in a tremendous amount of research, but we still get emails and letters to tell us who should be have interviewed.” Often the people suggest from them to interview are unavailable.

“Beyond the interviews, we spent a couple weekends at New College just hanging out,” Tickell continued. “We would go to the Four Winds, the pool or palm court and just tried to be there when it seemed like the obvious time for something to happen.”

The documentary is partially funded by the New College Foundation and the rest is covered by Green Planet Productions. According to Tickell, the documentary’s premier will be held at downtown Sarasota’s Hollywood Theater on the Saturday of the 50th Anniversary weekend. From there the film will be entered into film festivals, be aired on television and sold on dvd.

“My hope is that it has a unifying message for New College,” Tickell said. “I want it to feel like a touchstone for them. It’s very hard to explain New College to those who have no experience with it. The obvious critics of the film are those involved with the school, but you’re not making it solely for them. You’re making it for the rest of the world as well. Externally, I hope the message is that this 50 year experiment, which is what it started as, really succeeded and that it’s an amazing institution.”

During the filming, one of the young members of Tickell’s crew said, “I want to go to college there.”

“That’s what I want people to feel,” Tickell said. “Even if they’re 80 years old.” According to Tickell, the film is about why New College’s type of education is important and that it should be used as a model for other schools. “School should provide students with more ability to self-direct,” Tickell continued. “The average college student in America graduates with a ton of debt and degrees that are by and large meaningless. So why would you spend that amount of money to get a degree that everybody has and that has nothing to do with today’s job market when you can go to New College and learn how to think. That’s the question that I want people to grapple with. Is the higher education system really functioning today?”

“The New College Experiment” should be completed by February of next year. According to Tickell, the entire crew feels an affinity with New College even though not everyone involved is a graduate. “Everyone who’s come into contact with the footage or Sarasota has a sense of how important the place is,” Tickell concluded. “They’re not just working on a piece for TV, they’re working on something they appreciate deeply.”