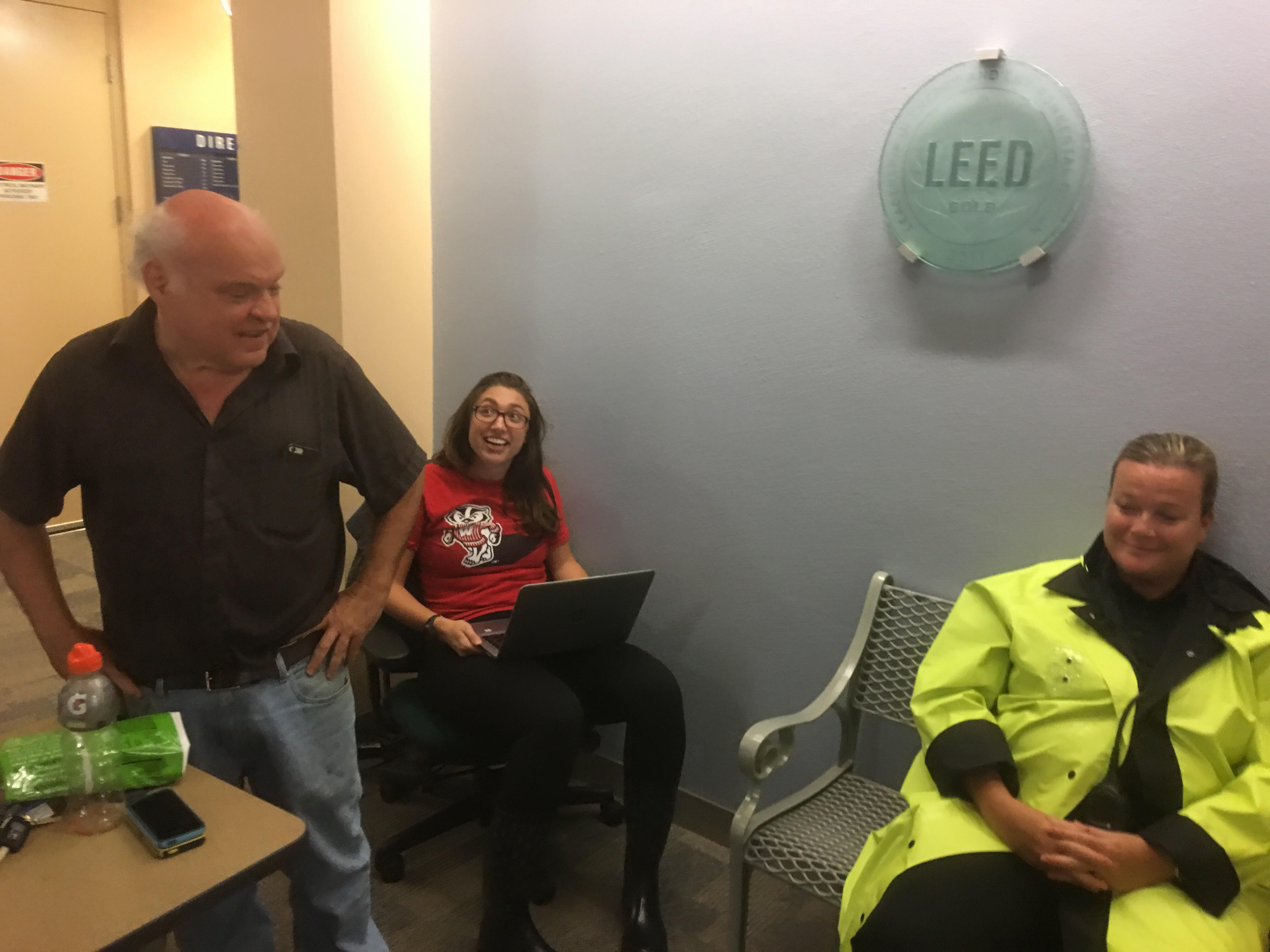 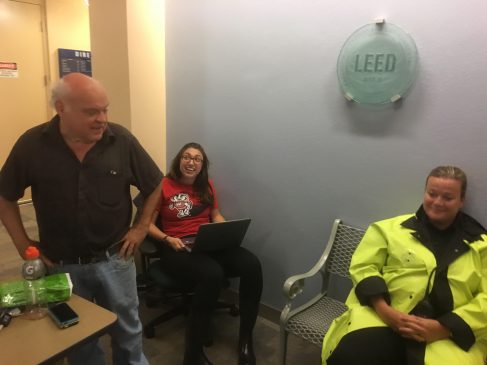 Hurricane Irma was projected to hit the Tampa Bay area on the evening of Sunday, Sept. 9 before heading north Monday morning. Florida governor Rick Scott told Floridians to evacuate the state at a news conference on Sept. 9. Among congested traffic and skyrocketing plane tickets, over 200 students were left on New College’s campus, awaiting Irma.

“Scary,” New College President Donal O’Shea said when asked to recount his experience with Hurricane Irma in a phone interview. “I don’t want another one.”

An emergency response team comprised of the New College Police Department (NCPD), Student Affairs and Physical Plant staff was formed and hurricane shelters at the Harry Sudakoff and Academic Center of Excellence (ACE) buildings were opened.

“It starts with looking at the forecast,” O’Shea, who slept in Physical Plant during the hurricane, along with Provost Barbara Feldman, said. “We didn’t want to send out an evacuation too soon because it was looking for a while like it was going up the east coast.”

O’Shea moved into Physical Plant on Saturday because it was near the Dort and Goldstein dorms. He recounts that it was eerie listening to the wind.

“ACE is more sound proof than Physical Plant and there was some water leaking [into the building].”

“As a side note, our staff are also people and were feeling fear and concern about this storm as well, while being separated from their families so that they could be here to support students during the storm and assist with preparation,” Stokes said.

The Ringling College of Art and Design (RCAD), only two miles away from New College, cancelled classes on Wednesday and closed the entire campus by Thursday, additionally releasing an announcement to students and faculty regarding the hurricane.

“Residence halls will be holding meetings tonight to answer questions and help prepare resident students as they form a plan for the storm,” the Ringling announcement reads. “Further, all students, faculty and staff need to check your emails for updates throughout the week and weekend. You will receive an email and an RCAD alert letting you know when campus is scheduled to reopen and when classes are expected to resume.”

Prior to arriving to Sarasota, Hurricane Irma passed through Miami.

“I had the plywood up on my windows so I couldn’t see inside, we couldn’t open the doors because we were scared the winds would be too strong and we wouldn’t be able to close it,” Mia Rathjens, who was in Miami when Hurricane Irma hit the area, said. “It was definitely scary for the two days where we didn’t have electricity.”

Rathjens studied Business and Psychology at Florida International University (FIU), located in Miami, Florida, for three years, starting in 2014. Despite having left in spring 2017, she still receives emails from the university–including the email on Sept. 8 from FIU President Mark B. Rosenberg to the FIU community 72 hours before Irma hit Miami.

“It’s insane how the communication with [FIU] works, they’re super on top of everything,” Rathjens said. “That’s what I appreciated while going there. […] I definitely think that schools need to be more considerate of students in general.”

Screenshots of the email were released and have been shared to Facebook.

“The next 72 hours likely will be very challenging,” the email reads. “Hurricane Irma has shown it has no mercy: the wind will be loud and nerve-wracking, the pounding wind-driven rain will seem unending, and storm-related noise will be annoying, to say the least.”

“At this point we are closed through Monday evening,” Rosenberg concluded. “But we expect to be closed for more days after that. Our first objective will be to ensure that the FIU family is intact. […] Then and only then will be determine a timetable to first reopen the university, and then resume classroom instruction.”

President Donal O’Shea sent an email regarding Hurricane Irma to the New College community on Sept. 6, 72 hours before the Irma was projected to arrive in the Sarasota area, similar to Rosenberg. However, the email was not completely dedicated to Irma and was instead the July-August 2017 President’s Report. The first five sentences of O’Shea’s email discussed Irma before directing attention to campus wide initiatives, events and campus achievements of faculty and staff unrelated to the hurricane.

The following day, the Business Office at the New College of Florida sent an email reminding students that the tuition and fee payment deadline would be Friday, Sept. 8, one day before Irma was scheduled to arrive. In addition to not extending the payment deadline in acknowledgement of the oncoming hurricane, the email did not mention nor address Irma except for a “BE SAFE!!!” at the end of the email.

“New College did nothing but enforce more stress,” third-year Brianna Luis said. “It really just didn’t help at all, there was no compassionate email, there was no reassuring email. […] It’s unrealistic and I thought that it was rude and unacceptable. It absolutely to me implies that our money is more important than our safety to them, first and foremost.”

Three days later, O’Shea sent an email to the college community with the subject line “Irma report.” In the email, O’Shea recounts his tour of ACE, the long night that the community had ahead for them, listed the members of administration present before ending his email with a discussion of the New College community.

“We often use the phrase ‘the New College community’ and with good reason,” O’Shea wrote. “We are a true community, as close-knit a one as I know, and that is what will help us through tonight and the days ahead.”

Although not specified in O’Shea’s emails, Counseling and Wellness Center (CWC) Assistant Program Director Duane Khan was the counselor on-call during the storm. Rosenberg provided the contact information for FIU’s counseling center in his email.

In a Catalyst survey, 100 current students were polled on Sept. 12 about New College administration’s response to Hurricane Irma. Of those polled, 44 percent were either on New College’s campus or in the Sarasota area when Irma hit. When asked whether or not they were satisfied with New College’s response to Irma, 23 percent were. This amount is almost equal to the 23 percent who stated that they had mixed feelings. The remaining 37 percent of those polled said they were not.

When asked how students felt specifically about President Donal O’Shea’s response, 30 percent were satisfied, 29 percent said they had mixed feelings and 25 percent said that they were not satisfied.

Overall, 58 percent of students said that the entire New College administration provided a safe environment for students during the hurricane. 7 percent of those polled disagreed.

“I think we did pretty well, but I also think that we were very lucky,” O’Shea said.  “What if we had gotten a Category 4 or something like that? I think ACE would have been okay, I don’t think the Power Plant would have been okay. The letter dorms are rated up to a Category 3 too and people would have been okay into the bathrooms. […] The other thing you sort of wonder about is, once you open a place like ACE, you worry about who else could come in so you want to keep it safe. Then you’ve got to let others in and when you don’t know the others, you worry about the safety. I was sort of wondering whether it would have been better to have people move to shelters, and I still don’t know the answer to that.”

Information for this article was taken from the National Hurricane Center, CNN and the Sarasota Herald-Tribune.