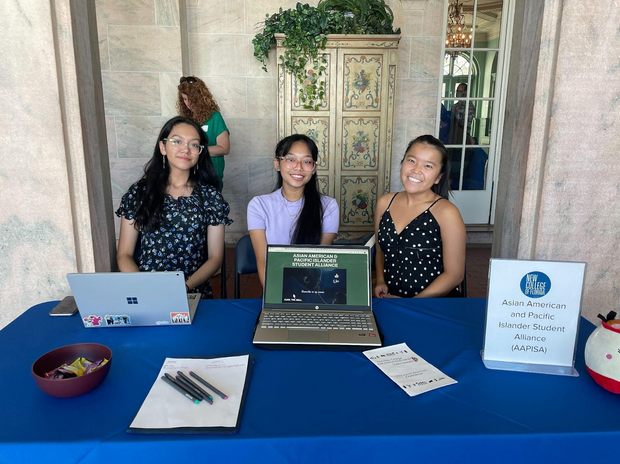 For the first time in over two years, the Asian American and Pacific Islander Student Alliance (AAPISA) had a meeting on Oct. 28 spearheaded by first-year and President Kyla Baldonado. The research and outreach put into resurfacing the club could not have been done without the help of first-years Ashley Petsanghan, Lianna Paton and Annabelle Hynes. Through the mentorship of upperclassmen and faculty members, AAPISA is able to congregate as an affinity club once again.

“When I came to New College for the first time, I learned from [second-year] Shawna [Itakura] that there wasn’t an Asian and Pacific Islander (AAPI) club,” Baldonado lamented. “I had a feeling that I would feel a little lonely if I didn’t have a community around me. Ever since April, I had the goal to make sure everyone is in an affinity group together so that we can hear each other’s experiences, learn from each other and be there for each other, because I didn’t have that.”

AAPISA was once a fully fledged affinity group on campus, previously led by Shelby Meyers (‘19) who passed down significant knowledge to Baldonado via email. In the past, the AAPISA would release zines filled with original art and written work by previous members of the club. For anyone interested, the zine—“The American Experience” (2018)—is still available to look through in the Gender Diversity Center (GDC).

“When I saw it I was like ‘Wow! We have to do something like this,’” Baldonado exclaimed. “This really records what it’s like to be on this campus as an Asian American and I feel stuff like that is important.”

“I want to build a legacy off of authenticity and community,” Paton described. “And writing things down. Oral tradition is so important, like how we’re talking right now, but on paper and having this article in of itself, that’s building us a legacy.”

When discussing the hardships surrounding bringing an affinity club back to the forefront of student’s minds, all parties involved agreed the most difficult part was finding a faculty advisor.

They found an amazing fit with Assistant Professor of Anthropology and International Area Studies Yidong Gong, who serves as their advisor this year. As a recent addition to the New College faculty in 2020, Gong has worked on many events like Global Wednesday Talk, Asian Film and Talk Series and China Town Hall.

“I hope to break away from the power relations between faculty and students,” Gong said. “I want students to see me as someone who can contribute to the growth of the club, instead of someone who they report to. As an anthropologist, I believe in the transformative and generative power of everyday practice: small changes, big results. Taking action is important. I also want students to have a good sense of the AAPI history through reading, such as Erika Lee’s The Making of Asian America: A History.”

The four responsible for the resurgence of the AAPISA could not contain their joy and excitement for what they have planned in the future.

“I’m really excited about the opportunities of growth we can do with this club,” Hynes exclaimed. “We want this club to last and hopefully never ‘shut down.’ I feel like the club will build a great sense of community for any incoming Asian students so they don’t feel alone if they do feel that way.”

“I came from a predominantly white high school, so coming to a new school was like a new beginning for me,” Petsanghan described. “Also meeting more people and having a sense of community for Asian Americans too.”

Along with fostering community within the New College sphere, Baldonado strives to educate and advocate for all Asian identities, cultures and complexities that come with living in a predominantly white community.

“Something I want to highlight in the club and our activities is the fact that one person’s experience as an Asian American is so different from another person’s,” Baldonado explains. “I try to make it a point to acknowledge that my experience as an Asian American is just one of millions—I shouldn’t speak over groups like neurodivergent Asians, Asian adoptees, queer Asians or Asians who came to the U.S. because of instability in their home countries. I see a lot of one-sidedness whenever I follow Asian diaspora discourse and a goal of mine is to combat those ideas that dictate what is and isn’t ‘truly’ AAPI; I hope to do so through the dialogues we have in the club.”