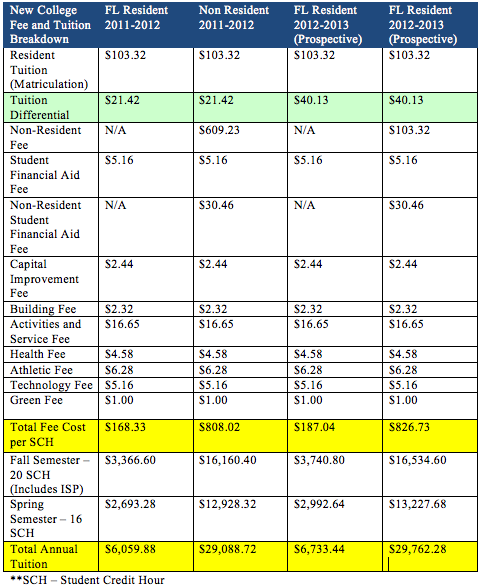 This model projects the impact that the 15% tuition differential increase will have on cost of attending New College in the 2012-2013 academic year.

The life of the average college student seems to revolve around four basic premises: school, social life, food and, perhaps the most important, money. In these tough economic times one can only hope that the cost of living remains affordable, especially to penny-pinching college students for whom bills and debts have only just started to manifest. However, the Florida legislature has proposed massive tuition hikes to occur over the next several years, which may be counteracting that goal.

Florida currently holds the position of 45th out of 50 states for the cost of in-state tuition for Higher Education. This position allows for Florida high school students to remain in Florida for a more reasonable price, cheaper than the national average, as well as attracting a number of out-of-state students to come in as well. Despite the positive effects that this has on Florida’s economy and even taking into account work of the Florida Student Association with events like Rally in Tally, increases are inevitable.

Differential tuition refers to an additional cost, usually considered a fee, which is added to the base price of tuition that all students pay and is used to supplement the college or university in other services, initiatives or programming. Martin estimated that this 15 percent increase would generate about $400,000, of which $120,000 (30 percent) would be funneled straight into need-based financial aid, and the other $280,000 would go towards the school’s budget. As of right now, even with this tuition increase, New College will still have a $500,000 deficit for the next year.

“I think it’s fair to say that when our board meets in May, one of the things we will be recommending is the 15 percent increase in tuition,” Martin stated.

Currently, New College’s budget remains insufficiently funded. According to Martin, over the last five years, the legislature has cut $5 million and the school is already experiencing a $2 million deficit.

“Through budget cuts, reducing operating costs and all of those other things, plus the tuition that we’ve generated, we’ve made up about $3 million of that $5 million. We still have $2 million to still make up, and this coming year, the legislature is cutting us another $1.5 million, as well. It’s a pretty hefty cut, but it is a one-time cut.”

So what does this mean to the average New College student’s finances? The 2011-2012 differential tuition was $21.42, and added to the matriculation (resident) tuition, the total was $124.74 per credit hour, not including all of the other student fees. With the increase, which amounts to $18.71 and will be added to the differential tuition for a total of $40.13, making tuition $143.42 per credit hour. In essence, students with 2 contracts and an ISP will be forced to pay $647 and those not taking an ISP, $599. These numbers do not, however, take into account the possible out-of-state increase.

The long-range goal of the Florida legislature is to continue increasing Florida’s state university tuition by 15 percent a year until it reaches the national average — which means that, instead of 45th out of 50 states, Florida would be closer to 20th. A recent bill that was sent to the governor states that Florida State University and the University of Florida are not limited to the 15 percent increase, and could in fact raise their tuition to the market base come next year. Luckily for Novocollegians, their tuition won’t shoot up like that.

“The legislature has said that ‘our economy has changed so greatly that we cannot continue to subsidize higher education like we used to,’” Martin quoted. “But there was a point in the not too distant past where for every dollar spent on higher education in Florida, the legislature was funding 75 percent and students were funding 25 percent. This year it’s closer to 50-50. But for New College, no, this legislature is still funding about 73 percent of our operating costs. So they’re funding New College more, on average, per student, than other universities.”

Yet, even with the better-value cost that New College presents, tuition increases can have a damaging effect on students, especially out-of-state students who have additional costs to account for on top of the base tuition. While the eight percent increase for out-of-state tuition has not yet been approved, the concern among the roughly 17 percent of Novocollegians who hail from other states or countries is evident. This has incited first-year Joshua Finkelstein, who founded the New College non-Florida Student Federation club, which, in addition to fighting tuition hikes, also seeks to help non-Floridians acclimate and network among other out-of-towners.

“We’re writing personal statements about being out of state students, who we are as out of state students and what an eight percent tuition increase would mean for us and our financial security,” Finkelstein explained. “We are planning on sending them to the Board of Governors.”

Finkelstein, who is from New York, is acutely aware of the cost and strain that out-of-state tuition has on his fellow students.

“Many of us aren’t the most well off, and public universities don’t necessarily cater to the super wealthy, that’s the point: education for everybody,” he said. “Out-of-state students don’t have the financial incentive to come to New College. They come to New College because they love the academic program, because they want to be here. […] If [the government] wants people to come to Florida, they need to create an incentive to come to Florida other than ‘it’s hot.’

It should be noted that those lucky students who signed contracts with Florida Pre-Paid before 2009 will not be assessed the differential because it is classified as a school fee and as such is covered by Pre-Paid. Moreover, while these increases to tuition are no doubt worrisome, students should also be prepared for an increase in the cost of on-campus housing and food, a prospected amount of about three percent.