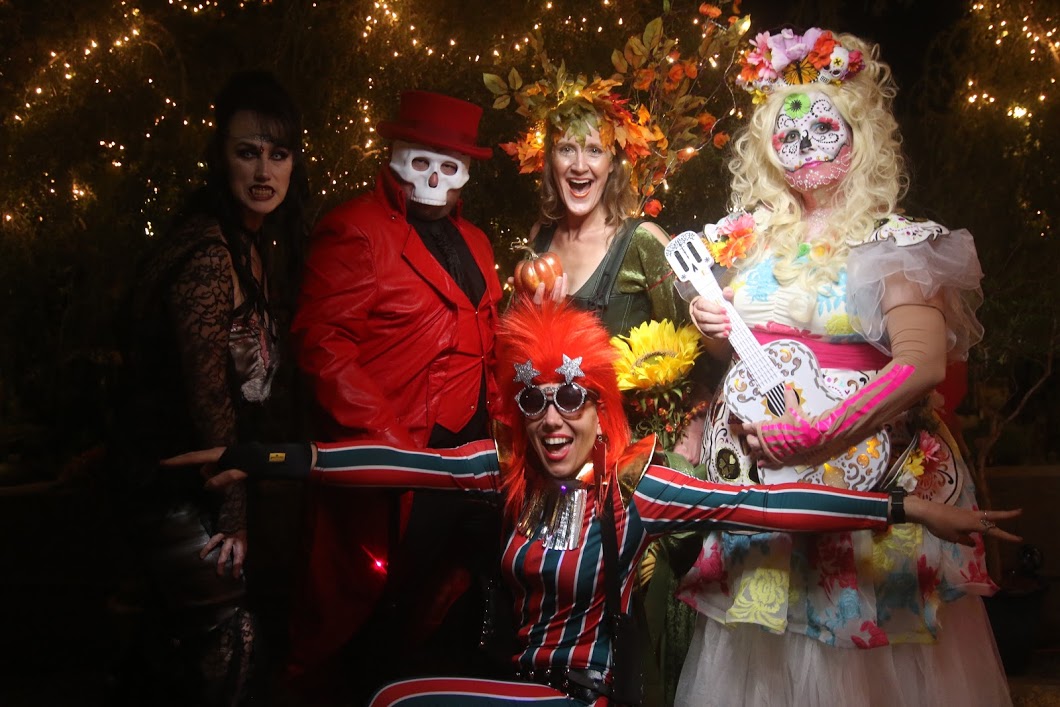 Williams poses in front with the fashion models.

“Every show that we do is super themed, but this one is out-of-the-box crazy,” Marina Williams (‘06), owner of Artpool and New College alumna, said, referring to the annual Halloween Costume Bash ART pARTy that took place on Oct. 27. Williams opened Artpool, a vintage clothing, vinyl and local art store in St. Petersburg, in 2008. She studied art and was a member of the Catalyst in her time at New College.

The Halloween Costume Bash ART pARTy featured dozens of models in an array of costumes and body paint to celebrate the festive season. Artists of all mediums were part of the show including photographers, illusionists, painters, musicians and balloon artists. The show was truly spooktacular.

“I made my own outfit,” Pamela Poole, a runway model and designer, said. “I used the crinoline from my wedding dress and parts of a dance costume from my studio and a sugar skull table runner.”

The show promotes members of the community with little to no runway experience to come out and express themselves in a supportive atmosphere. There is a fashion model interest meeting open to the public the Saturday after each show to assemble the next runway show.

“I love the chance for someone like me to show my creativity and to blossom that one night of the year and come out of my shell,” Poole said as she adjusted her handmade flower crown.

Before the runway show, entertainers of professional and beginner levels performed dances and routines. One of the numbers was a burlesque, courtesy of Coyote Caliente. Paired with artist Chevy Johnson, Caliente was covered head to toe in body paint that resembled a colorful wolf.

“In Hispanic culture there are these little wood carvings in Dia de Los Muertos called “Alebrijes” and one of the most popular animals that they carve is the coyote, and it’s great, I glow in the dark!” Caliente said.

The monthly Artpool Fashion Show has been going strong for a decade. Each month’s party has a different theme, but some have been annual traditions since the start. Williams credits New College Walls and Palm Court Parties (PCP) as inspiration for many of her show themes, like the MUSE Art and Body Art Show in February.

“It was inspired by the Body Art Wall at New College,” Williams said. “It encompassed people bodypainting themselves and their friends and getting down to great music as living canvases. That happened while I was at New College from 2002 to 2006.”

Other fashion show themes include Gatsby Gala, Mermaid Underwater, Mad Hatter and Trashion Fashion, a fashion show that requires all clothing to be made out of upcycled and recycled materials. Williams’s all time favorite was her Bowie Fest shows.

“Bowie Fest is a love child of mine,” Williams said. “We’ve done two here, one prior to his passing and one after.”

Williams encourages New College students who make art to contact her about her other monthly event, the Crafty Fest. The Crafty Fest is a small market in the courtyard of Artpool that promotes local artists and hosts vendor booths. Williams ended her interview with words of wisdom to young artists at New College: “From everything you learn in life, take those best things that you appreciate and meld them into your own art form and you will find your way.”

Artpool is located at 2030 Central Ave., St. Petersburg, FL. Admission to Artpool fashion shows are $15. Visit www.artpoolrules.com/model-application–rules.html to learn more about how to volunteer/participate in the runway shows.