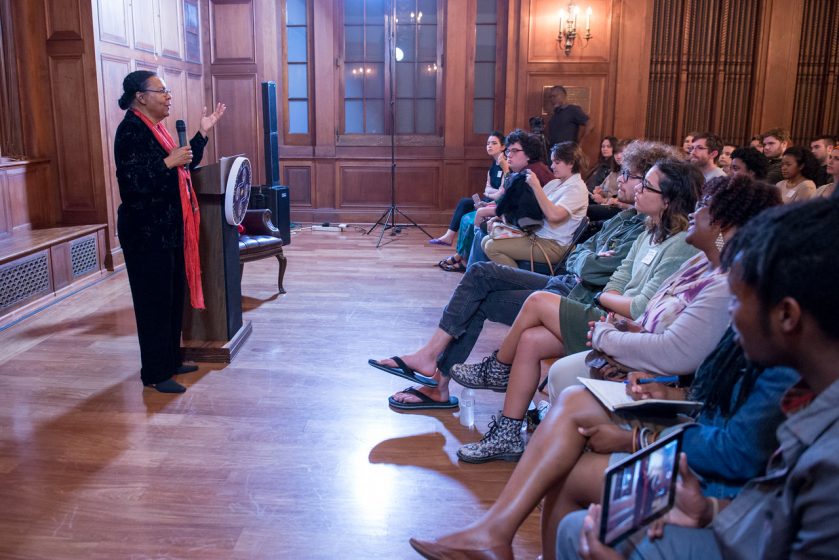 “Love remains a force that can empower people to resist domination and create new ways of living and being in the world,” bell hooks said in her address at the final event of Black History Month.

bell hooks invited her audience to think and act with integrity, to move from theory to practice and to critically note the impact of white supremacy on individuals, groups and governments. Most importantly, she encouraged her audience to practice self-love and to heal. These sentiments resounded with the mass of students, faculty and community members who gathered in the College Hall music room to engage in the culmination of a month’s worth of discussion and celebration of black history. Black History Month at New College took place over the course of February with 10 main events organized by a group of dedicated students and two faculty sponsors in conjunction with campus organizations, community members and invited guests. The month concluded with a symposium, “New Schools of Black Thought,” with panel discussions and keynote speaker bell hooks, on Feb. 27. hooks is an author and activist whose discussions on race, intersectionality, gender and capitalism have earned her worldwide acclaim. She has written more than 30 books and is the founder of the bell hooks Institute for Critical Thinking, Contemplation and Dreaming.

Black History Month has not always been observed like this at New College. “New College is a great place in terms of how much some of its students work towards fostering a really critical campus culture,” McIntosh said. “But as far as New College really being a place that is committed to being anti-racist, there’s a lot of work that needs to go into that.

“I don’t think New College is exceptional in its need for more of this. Everywhere needs more of this,” McIntosh added.

Black History Month, observed every February in the United States, began as Black History Week in 1926, founded by Dr. Carter G. Woodson. The second week in February was chosen for it coincided with the birthdays of Abraham Lincoln and Frederick Douglass. By 1976, the week had expanded to a month and celebrated nationally. Since then, each president since Gerald Ford has issued a Black History Month proclamation.

The Association for the Study of African American Life and History (ASALH), founded by Woodson, continues to work year-round to promote study and conversation of black history. The Sarasota chapter of ASALH is the largest in the nation and collaborated to support the students organizing Black History Month at New College. ASALH held a luncheon on the day of the symposium, so the symposium was pushed later to accommodate all guests and speakers.

The events were held with funds from each division and the Provost’s and President’s offices. “When you talk about African Americans or black folks in general, I think it’s a community that’s made many important contributions to this country and has a rich and complex and interesting history in contemporary culture, for me one of the things that is important about this celebration is highlighting that,” Zabriskie said. “I also think we’re in a heightened moment where we’re talking about race, and some of the language is extremely divisive and extremely polarizing, so part of what I appreciated about the symposium is being able to be in conversation with the Black Lives Matter movement and to provide a counter-discourse for some of the divisive language we’re seeing in the mainstream political sphere.”

Zabriskie said the group aimed to curate a diverse and comprehensive schedule of events. As a group, the organizers discussed the themes they wanted to address and split into committees who then planned events and invited speakers or performers.

“It was artistic, political, mainstream academic,” Zabriskie said about the schedule of events. “It was fun.”

Zabriskie and Goff explained that networking in Sarasota greatly enhanced the array of speakers whom the organizers contacted. “Folks have retired down here, and some of them have had amazing careers,” Zabriskie said.

The symposium, which began with a performance by Moor Mother Goddess, presented two panel discussions. The first, titled “Black Youth Matter: Living and Growing Up Black in the Violent States of America,” was facilitated by Dr. Marcia Chatelain of Georgetown University, Dr. Cheryl Rodriguez of the University of South Florida, and New College’s Duane Khan.

Next, Mayor Willie Shaw joined Dr. Lisa Merritt for a discussion of the Newtown community. By the time bell hooks was introduced, the music room was filled with people. Her talk encapsulated many of the themes which were approached over the month’s events. From Beyonce to police brutality to radical expressions of self-love, bell hooks’ discussion engaged listeners from the student body, faculty, staff and community.

“If we ended all police brutality against black males today, would black men have lives of optimal well being, or in fact would black males still struggle?” bell hooks asked. In asking us to pay attention not only to mainstream, publicized injustices, bell hooks invited her audience to take note of systematized oppression and white supremacy which seep into everyone’s lives.

But the conversation also turned to love and healing. “To engage the practice of love is to oppose domination in all its forms,” hooks said. “To fully embrace the transformative power of love, we would need to have the revolution of values Martin Luther King called for before his untimely demise.”

To conclude, bell hooks said, “We can choose love, we can choose to leave dominated thinking behind.”

“I hope that it brings people together,” Zabriskie said. “That’s what I appreciated about bell hooks’ talk, there was a way in which multiple people could connect and enter in and get something from her talk.”

Despite a packed symposium and great turnout at most of the month’s events, the organizers would still like to reach more people. McIntosh noted that turnout can always be improved.

“For the people that did go, it’s just crazy to say that you saw bell hooks in the flesh,” McIntosh added.

Still, Black History Month events were deeply meaningful for those who organized and attended them.

“These events are great for rejuvenating the folks that are already committed to interrogating these things in their day to day,” McIntosh said. “What would make [these events] even more effective, more potent, would be to somehow bring in those people who don’t get it.

McIntosh described Black History Month as temporal. Indeed, the events over the course of February served to start the conversation, but they certainly did not finish it.

Although February is over, the conversation will continue with a Day of Dialogue on April 4 in Sudakoff Center.

Information for this article was taken from africanamericanhistorymonth.gov.