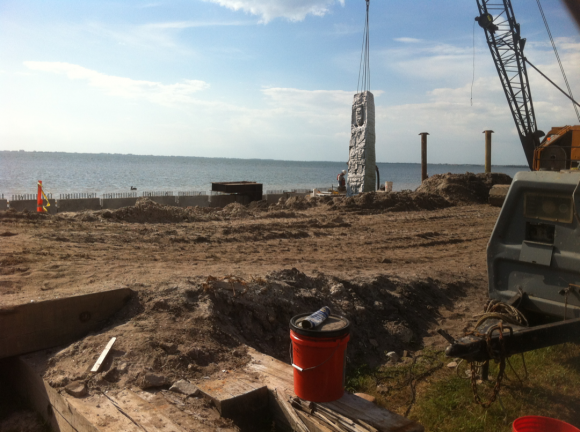 A construction worker guides the crane operator as the stele is lifted from the ground.

On Friday, Mar. 30, construction workers unearthed artifacts while placing slabs of concrete for the new sea wall on College Hall’s bay front. Though the sea wall was on track for completion, construction has been halted until further notice. “I didn’t know if the new sea wall would be ready in time for graduation,” thesis-student Michael Waas told the Cataclysm. “But after finding these artifacts, it looks like we may be forced to have the graduation ceremony elsewhere.”

Among the artifacts found by the bay is what appears to be a Maya stele, stone carvings often erected by the Maya to commemorate events such as ascensions to the throne or military victories. Experts believe this is a sign of the Ringling family’s eccentricities, likely buried by Charles Ringling to commemorate the beginning of College Hall’s construction in 1925.

“It’s easy for the public to get caught up in ‘Maya prophecies’ predicting the apocalypse,” Gabrielle Vail told the Cataclysm. “The stele was probably buried here by the Ringlings. Just take a look at the fountain behind Cook Hall. It has faux Maya hieroglyphs”

Others, believe the stele is a sign of the apocalypse. “Did you know that the city of Sarasota is the sister city of Merida, Yucatan?,” a New College student who admits they have watched too many episodes of “Ancient Aliens” on the History Channel asked the Cataclysm. “The Discover Yucatan 2012 conference was held at New College over Spring Break. It’s not a coincidence, the apocalypse predicted by the Maya is going to happen. I’ve seen my fair share of movies. There are no coincidences.”

Though doubtful of the impending apocalypse’s veracity, New College President Gordon “Mike” Michalson welcomes the possibility. “I think it’s a great honor for New College to be the catalyst of the Maya-predicted apocalypse,” Michalson told the Cataclysm. “We’ve survived budget apocalypses before, so the actual apocalypse should be no different.”