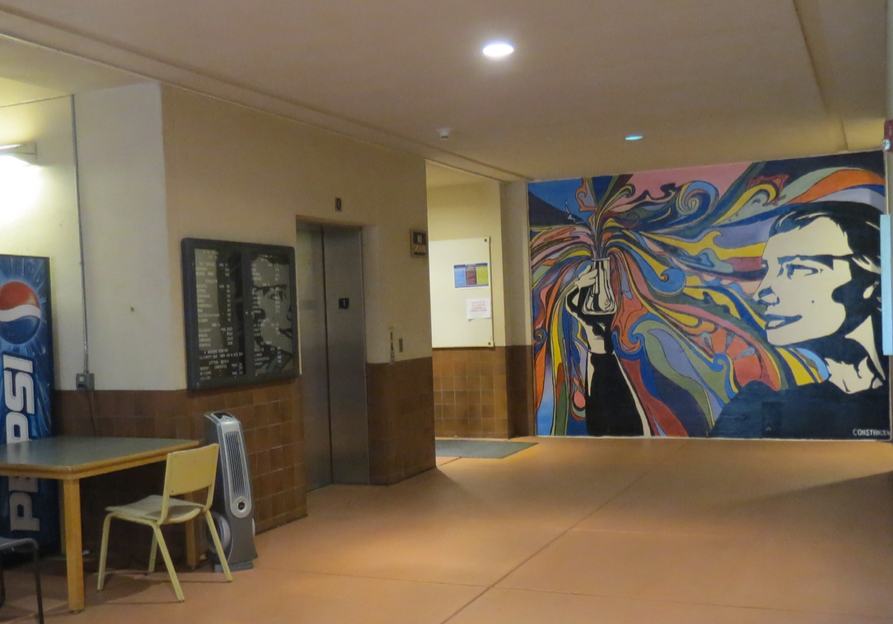 Two white walls have become a canvas for interdisciplinary collaboration on campus. Put up to block entrance into Heiser’s construction zone from open breezeways on the first and second floor of the building, they have now been covered with student-created murals thanks to a painting contest orchestrated by Professor of Biochemistry and Natural Sciences Division Chair Katherine Walstrom.

“The first day I saw the painted wall, I’m like, ‘oh my God, we have to put something on that wall,’” Walstrom said. “It worked out beautifully. I’m thrilled.”

“We gave them a prize, we paid for their stuff, we’re paying them to put up the painting,” Walstrom said about student compensation. Those selected were given a $50 prize, plus costs for materials.

The walls are 12 feet wide and 9 feet, 3.5 inches tall and were put up by Tandem Construction, the company responsible for building the Heiser Natural Sciences (HNS) complex’s addition. A nearly 10 million dollar project slated to finish by August 2017, Heiser 2.0 will house laboratories, classrooms, faculty offices and student collaboration areas, accommodating the lack of space in the current complex. The previously open breezeways will connect to the new building, be closed and be air conditioned – hence the temporary, now muraled, walls.

Once the walls are removed and connected to the new building, Miles plans to donate her design if the school does not keep it. Sartor thinks it would be neat to keep the mural around the natural sciences area.

On the construction project, Walstrom mentioned at its groundbreaking ceremony held in early October, “When we designed the gathering places for the new wing, we were hoping that they will become a destination for all New College students – and not just the Natural Sciences.”

“I applied for the painting contest because it sounded like an interesting project,” Miles – who is an art area of concentration (AOC) – said in an email interview. “I don’t get many chances to work on murals or any sort of public art, and the challenge of coming up with an interesting yet somehow scientific subject matter was enticing.”

While she’s been doing painting and drawing commissions for years, Miles – as someone with a professional interest in art – is looking to step up her game. The interdisciplinary nature of this project saw Miles developing ideas in a realm she doesn’t regularly work in – science.

“This kind of interdisciplinary prompt for an art project is exactly the kind of thing that gets me excited because I hate being limited to just one subject or discourse,” Miles elaborated. “It challenges me to think of ideas that I usually wouldn’t – my design for this mural is a perfect example. I never would have come up with this concept on my own time because I don’t study science or think about it a lot.”

“I applied because I enjoy veering away from the sciences every once in a while to do artsy things,” Sartor – a biology/chemistry AOC – said in an email interview. “Also, I thought it would be a good legacy to leave as it combines two of my main passions: art and science.”

Sartor’s mural depicts an inspiration of her’s – nuclear physicist Marie Curie. Curie is the first woman to win a Nobel Prize and the only women to have won two: in 1903, she received the accolade for radioactivity and, in 1911, again for chemistry.

“I also wanted to make the mural as colorful as possible to brighten up that dull Heiser corner I walk by every day,” Sartor said. “The colors spilling out of the flask do not depict an actual chemical reaction – at least not that I know of. If so, wow – I’d love to see that one!”

Sartor’s mural took 14 hours, and she enlisted her friend and roommate – third-year Claudia Vila – to help at the end.

“Every mural begins with an idea, a sketch,” Sartor said about her process. “After that, I free-handed a general sketch on the wall and began painting with the help of a stepstool from the bio wing.”

While her professional interests stay in the natural sciences and research, Sartor still finds it exciting to get commissioned for murals. She has done 11 murals in five different states over the past two years – her last one being at Yellowstone.

“I absolutely love the interdisciplinary nature of New College; it allows me to pursue both my scientific and artistic interests, and I think this mural opportunity was a great example of that,” Sartor said.