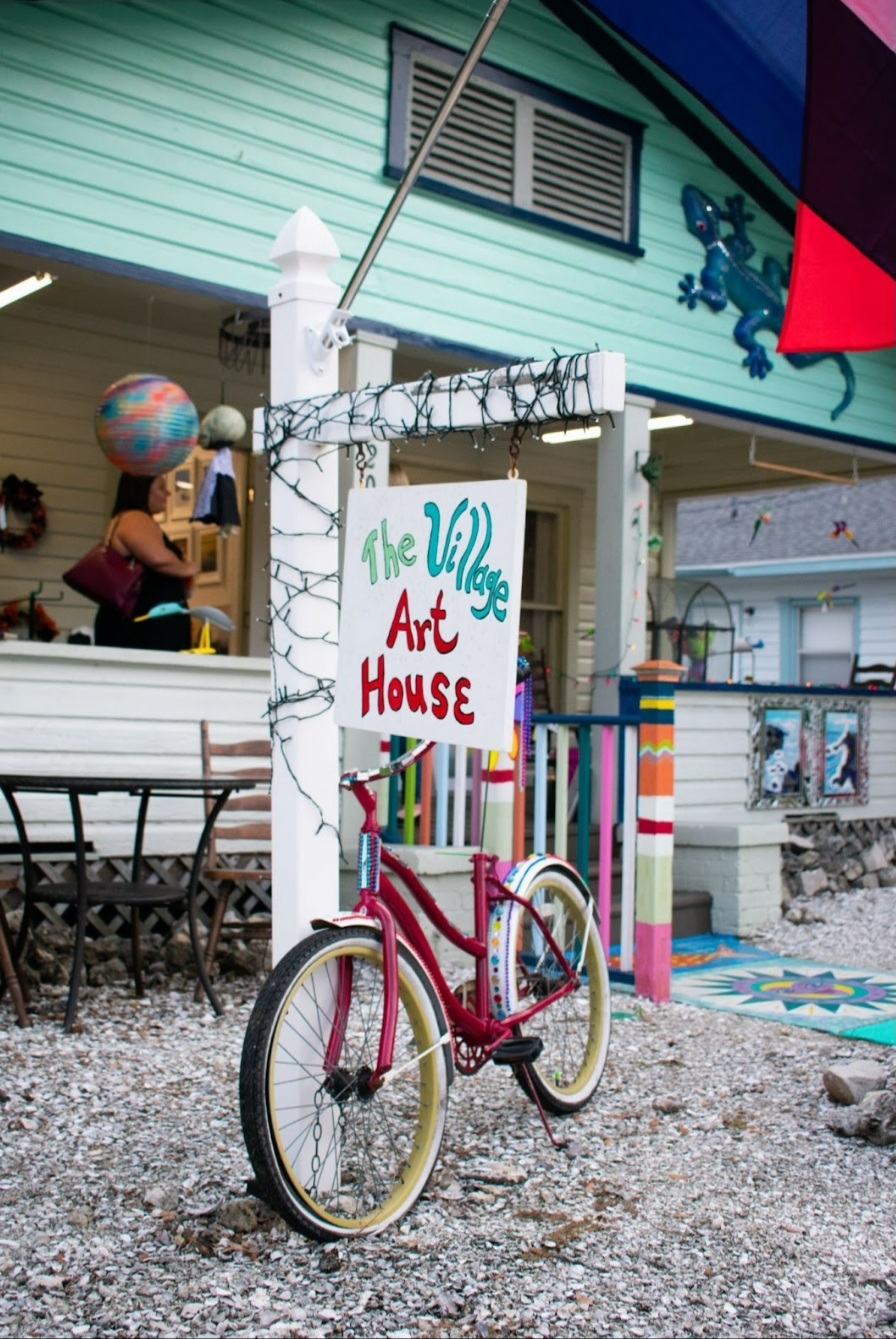 The Village Art House, one of many attractions at the Village of the Arts.

The Village of the Arts (VOTA) used to be a neighborhood of doddering early-20th century “residential bungalows, Florida Cracker homes and later additions,” according to the Artists Guild of Manatee. The neighborhood was experiencing severe urban decay, a common problem in American cities and one with no easy answers. The most common approach has been “urban renewal” or the redevelopment of the affected areas—clearing out slums to make way for new homes at higher prices, resulting in the displacement of those who lived in the homes. These policies have been widely deemed as disasters and new approaches focusing instead on “urban revitalization” of blighted areas—which involve renovating rather than replacing—have become increasingly popular, beginning in the 1990s. Though, these policies have their own problems, primarily gentrification, because of how they raise rents beyond what people there can afford.

However, in 1999, working in conjunction with the Artists Guild of Manatee to revitalize the decaying neighborhood, the city of Bradenton chose a unique approach by rezoning what is now the VOTA as “live-work.” After a major setback during the 2008 financial crisis, the VOTA has found modest success, but also confronted many difficulties. Still, the unique art-focused approach to revitalization of Bradenton’s city projects since then have used the VOTA as a model, with groups like Realize Bradenton at the forefront of the push. Live-work zoning is a name for a broad range of more specific zoning ordinances that allow for the use of a property as both residential and commercial, meaning owners can run a business out of their homes. These units are called home-based businesses (HBBs). Bradenton’s live-work zoning works via overlay zoning.

“The purpose of the VAOD [Village of the Arts Overlay District] is to encourage a desired mix of appropriate home occupation and home business uses oriented toward, or supporting a visual or cultural arts theme while maintaining the residential character of the underlying residential neighborhoods,” according to the Bradenton, Florida Code of Ordinances.

In order to live in the VOTA, a proposed home occupation must be determined to be “related and contributing directly to an arts theme.”

The live-work zoning does a good job attracting artists, especially because of its rarity. In fact, “by the mid-1950s, live-works essentially became illegal or highly discouraged in most places,” and though live-works have seen a resurgence in the last 30 years, driven by their high demand, they’re still difficult to find.

“Artists are always looking for a live-work because it keeps expenses low,”  six-year VOTA resident and owner of The Dude and Mary’s Art and Life and Music Mary Fragapane said. “It’s the dream. The neighborhood has been revitalized house by house, artist by artist, business by business.”

The VOTA has evolved, however gradually, through a difficult first decade into an eclectic and creative cultural district in downtown Bradenton. Cultural districts benefit their city by “beautifying and animating the city, providing employment, attracting residents and tourists to the city, complementing adjacent businesses, enhancing property values, expanding the tax base, attracting well-educated employees, and contributing to a creative, innovative environment,” according to Cultural Districts: The Arts As a Strategy for Revitalizing Our Cities by Hillary Anne Frost-Kumpf.

The extent to which the VOTA has produced these effects has not been comprehensively analyzed. Measuring the success of the VOTA as a whole is tricky and surprisingly subjective. In fact, Professor of Sociology and Urban Studies David Brain said that the VOTA becoming too successful is a serious concern, because too much success too quickly could mean gentrification or the establishment of franchises in place of local businesses due to higher prices and rents. This avoidance of gentrification is seriously spectacular, as gentrification plagues most revitalization campaigns.

“It’s not gentrified, it’s not commercialized,” Fragapane said proudly. “It’s real artists living and working and crafting art in a way that speaks to them.”

The reason VOTA not gentrified owes to the still-affordable prices of homes in the neighborhood. Overall, Brain is happy with how the VOTA has grown and what it says about the relationship between art and public space.

“The Village has experienced remarkable growth, evolving from a neglected neighborhood to one of the most unusual and visited places in Manatee County,” the Artists Guild of Manatee said, with far more bombast. “[We’re] excited about the future, as more residents arrive, new businesses take root, and ongoing infrastructure improvements continue.”

To boost attraction, the Village hosts “artwalks” the first Friday night and Saturday afternoon of every month, where “you’ll be greeted with live music, incredible food and unique indie art spanning every genre,” according to the VOTA’s website.

Because many galleries are only open during artwalks, they’re one of the best times to visit the VOTA. Fragapane advised prospective visitors to visit at night when the Village is illuminated in vibrant colors.

“There are galleries that are open every day of the week, though few on Sundays and Mondays,” Fragapane noted. “If you come on a regular day, come hungry so you can grab lunch. The food is really good and the restaurants are all unique.”

In reference to the popularity of Bradenton’s Kava Social Club among some Novos, she mentioned Adobe Graffiti Lounge, which also has a kava bar. These restaurants are also open during artwalks, but there are unique benefits to visiting on ordinary days.

“There aren’t as many people so you can wander around more and really take things in, meet a couple of artists, find a few open galleries,” Fragapane explained. “Everyone’s always happy to see people coming through the neighborhood. It’s just more leisurely and relaxed.”

Much unlike the leisurely experience offered on regular days, on Friday, Nov. 5 from 6 p.m. to 9:30 p.m. and the following day from 11 a.m to 4 p.m., the Village will host the Festival of the Skeletons. This is the largest and most popular artwalk of every year, and is centered around Día de Muertos, or the Day of the Dead.

“Visitors can leave mementos for loved ones they’ve lost,” Fragapane said. “A lot of the participating businesses have shrines. This year, the Red Elvises are playing at Cottonmouth, they’re a huge band and they have an amazing cult following, it’s an incredible show to catch.”

Overall, the night is a celebration of life, despite the name, and it has the most to offer of any night in the Village. Additionally, the VOTA has a wide variety of places to buy unique gifts for the upcoming holidays or any occasion at all, Fragapane emphasized.

The VOTA is bisected by 13th Ave, with many more shops to the north than the south, and because of this the southern portion is often missed by visitors because they’re not sure if it’s a part of the village. But if a visitor were to make the trip to the southern tip, they would be greeted with a handful of shops, including Fragapane’s.

“Often,” Fragapane said, “when people think of the VOTA, they imagine something that was planned and should now be finished,” Fragapane said. “But it’s never really finished. It’s always changing, it’s always progressing and that’s what makes it unique and alive. At its heart it’s an artist colony, so its creation happening live every day, through the way people live their lives, through the way they decorate their homes, through the way they run a business. The best way to experience the VOTA is to have a spirit of adventure and to come often.”