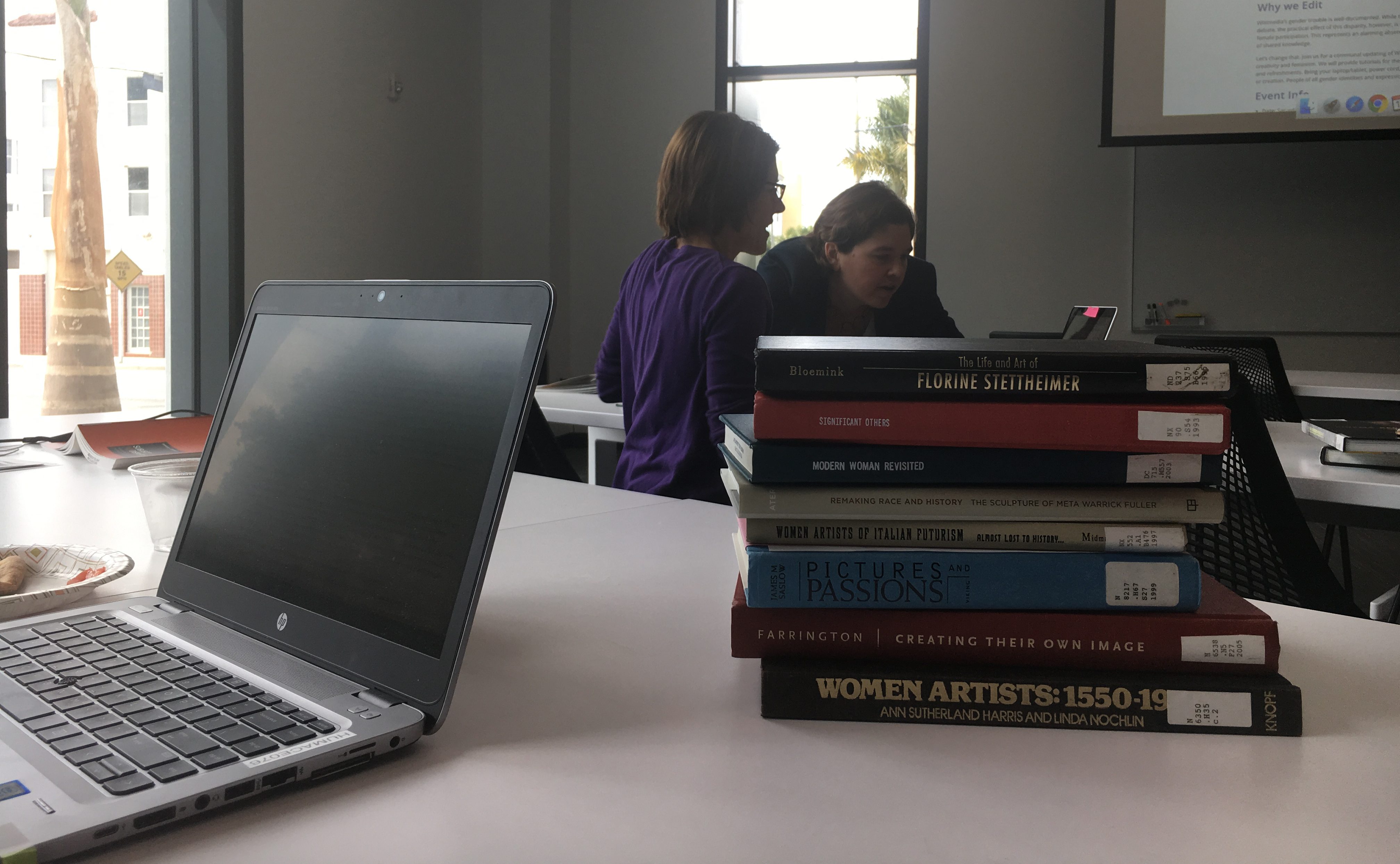 Less than 10 percent of Wikipedia contributors identify as female. How might this lack of gender diversity impact the knowledge shared on the collaborative online encyclopedia? This is something Art + Feminism seeks to address – and something that the local academic community addressed this weekend.

Art + Feminism is an organization founded by four art historians who strove to make narratives of art and feminism more visible on the site. Since 2014, students, artists, librarians and more across the globe have gathered together to edit Wikipedia articles in groups. While the Edit-A-Thons – as they’re called – are usually held in March, one was held in town on April 15 at Goldstein Library at Ringling College of Art and Design.

Though it happened on the Ringling campus, it was the collaborative creation of New College faculty and librarians.

The basic goal of an Art + Feminism Edit-A-Thon is to increase the diversity of voices contributing to public knowledge. The organization puts an emphasis on gender diversity, emphasizing an inclusivity toward all genders and a need for intersectional feminisms.

“We have different perspectives and practices but share the belief that art is fundamental to thriving societies and strive to make visible the lives and work of underrepresented artists,” Art + Feminism states on its website.

The local Edit-A-Thon was inspired by a new push to make connections between Ringling College and New College in the Colleges of the Creative Coast Consortium, or C4. Humanities Librarian Theresa Burress, Art History Professor Dr. Katherine Brion and Ringling Professor of Renaissance & Baroque Art & Architecture Dr. Chrystine Keener, along with other librarians and faculty from Ringling, gathered with their laptops to work together on the event.

Theresa Burress had previously gotten New College students involved in the practice of editing Wikipedia with a group Independent Study Project (ISP) in January she has organized and led for the last three years. Burress also serves as executive council of the Florida Digital Humanities Consortium. With the help of Burress, Brion has also begun incorporating the digital humanities into her classes, including Wikipedia editing.

In order to edit Wikipedia, one must simply make an account with the website. The initiative is entirely volunteer based, but it’s often a great deal of work in order to do it well. Brion and the other librarians each had stacks of books next to them, researching details and citations in order to make small edits on the pages of artists. There’s various sources within Art + Feminism that suggest certain pages that require editing or further detail.

Brion, for example, noted that a section of African American artists’ Wikipedia pages needed contribution, and was making edits on the Wikipedia page of artist Renee Green and a project she did on racialized human display of the 19th century. This specific project focused Sarah Baartman, a Khoikhoi woman from what is now known as South Africa who was featured in circus-type shows in England by the name of Hottentot Venus. Her body was displayed as a spectacle to the British, and was further used in medical journals to assert scientific racism.   Renee Green created various installations to reflect upon that history.

“I looked at her page, and there were various things on it, a list of her works. I noticed in the projects that are listed, that part of her work about those installations wasn’t included,” Brion said.

“So I thought, that’s a small piece that I can contribute and know sources for. So I’m adding that in her list of projects and am giving a brief description and then because I’m there, I’m editing more for stylistic things,” Brion said. “If you find typos, you can clean up some things and take a look at citations. It’s just a tiny piece because that’s just something that can fit within this time frame.

“There is something about adding and improving these entries and getting information out into this public space which is cool.”

The Edit-A-Thon this last weekend was a bit of a test-run for more events like it in the future. Scheduling between the two schools can often be difficult, with Ringling and New College running on entirely different schedules. However, partially with help of the Mellon Grant that New College received last year in order to bolster collaborations within the humanities, Ringling and New College professors may be the first to begin working together. Brion and Keener have created a proposal to use Mellon Grant funds for a faculty seminar on art history pedagogy and engagement.

The seminar would re-iterate many of the themes of Art + Feminism edit-a-thons, as well as the overall focus on the digital humanities that Burress and others have been creating at New College. There is furthermore an early initiative within the C4 on the topic of gender, which Keener is involved in. With this new push toward the humanities and collaborations between the C4 colleges, Art + Feminism Wikipedia Edit-A-Thons are a perfect fit.