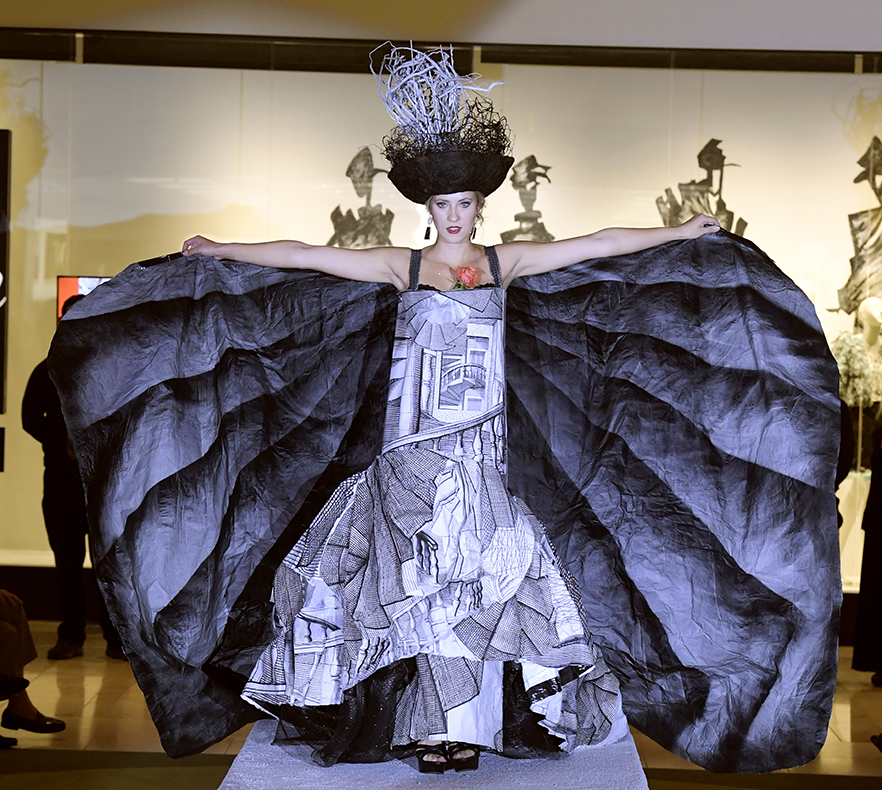 All photos courtesy of Arts Center of Sarasota.

When Catalyst writer Noah Baslaw entered the Art Ovation Hotel on the evening of Friday, Apr. 12, the ground floor was packed with attendees and donors to Art Center Sarasota who were huddled around the art on silent auction, the complimentary refreshments and fancy cheese and dried meats. Upon closer examination, however, the fundraiser’s guests were adorned with a variety of levels of alternative dress, from nothing but a funny hat or wig to coordinated full outfits between multiple people. One couple was completely orange, sporting orange fedoras to top it off. Something new, or perhaps old, was happening that night.

“Bringing back the Beaux Arts Ball has been something that we have considered for quite a few years because the event marked a time when visual artists were ruling this town, and I wanted to bring back that excitement,” Art Center Sarasota Executive Director Lisa Berger said. “We have been doing the unconventional fashion show, IConcept, for our 11th year now. I wanted to add another dimension to that event so the guests had a more interactive role, and I thought it would be fun for them to get dressed up in a theme, as they used to do for the Beaux Arts Ball.”

IConcept, the unconventional fashion show fundraiser, helps fund Art Center Sarasota, a local organization that offers a gallery to showcase and a program to educate local and regional artists and provide the general public with a place that promotes artistic expression.

“The Ball is not the same as it was back then because there were way more artists and they really got into the costume making—or borrowing from the Asolo Repertory Theatre,” Berger said. “They really went crazy with the costumes, which allowed them to be creative and not stuck wearing a black tie or anything too formal.”

The Beaux (meaning ‘beautiful’ in French) Arts Ball was about celebrating creativity and actively participating in the expression as a part of a moment. It was also a lot of fun. The local Ball was started by the Ringling School of Art, now formally known as the Ringling College of Art and Design, in the 1940s. In 1947 what is formally known as Art Center Sarasota began participating in the Ball too. The event celebrated the vibrant visual art community, which was, and continues to be, a large part of Sarasota’s identity.

Josh Beadle, from SarasotaOut.com, a local website helping to connect members of the LGBTQ+ community with local spaces and events, participated in last year’s IConcept event by helping organizing a drag queen show with performances by the Fantasy Girls featuring emcee Brianna Summers, according to the Sarasota Herald-Tribune. There was not a drag show scheduled this year, however, Beadle judged in the guest contest. Art Center Sarasota likes to show its support for Sarasota Out and include them in their fundraiser festivities.

“SarasotaOut.com is a website that specializes in promoting our area’s LGBT friendly businesses and events to create a more vibrant, attractive and prosperous community for our residents, visitors and businesses,” Beadle said in an email interview. “We have partnered with many organizations, charities, festivals and events to continually strengthen our community and showcase the many colors of the rainbow that one can find in Sarasota. The arts and Fashion have always been safe and welcoming to the LGBT community, which is why SarasotaOut.com and the Art Center Sarasota naturally built a relationship.”

The IConcept event was created as a fundraiser, which Art Center Sarasota lacked at the time, according to Berger. The proceeds help support the local arts center.

“I was on the board of directors then,” Berger said, “and I started thinking about how the performing arts get a lot of attention. They are easy to relate to because you can be a passive observer. The visual arts is a different story because it is pictures in the gallery, on the wall. So I thought, ‘How can we make art perform?’”

The answer for Berger was simple. Non-fabric visual art had to be worn on a runway.

“I started asking artists to create outfits that could be worn on the runway using unconventional materials, which means not fabric,” Berger said. “They actually create the fabric.”

The Catalyst sat down with one of the artists and models for the IConcept runway show at the Beaux Arts Ball. Louise Kingman was one of the models.

“Barbara Gerdeman and Elizabeth Goodwill are my artists,” Kingman said, “and I am wearing one of two pieces they created for tonight.”

The title of their walking sculpture for this year is Where we are going we do not need roads. Gerdeman and Goodwill work at the Art Center and have been collaborating together on their IConcept outfits for the past three years now.

“I have been doing this event for nine out of the last 11 years,” Gerdeman said. She explained the content of her model’s outfit: cardboard and posterboard, maps, mylar paper and bubble wrap.

Prior to her involvement with Art Center Sarasota, Berger came from the fashion industry as a designer in New York. She mentioned that the idea for the IConcept fundraiser was based on the television show Project Runway’s “Unconventional Talent” content.

“It’s the most fun thing when people have to use objects that are not necessarily used for commercial fashion,” Berger said, “making it like a sculpture that walks on a runway. It becomes a performing piece.”

The IConcept show does not use professional models.

“All the artists get friends or people they know to model,” Berger said. “A lot of them have great personalities and it’s a lot of fun. The audience goes crazy because they cannot wait to see what the artists have made each year.”

For Berger, the event is a celebration of creativity, “which is what the arts are all about,” she added. In that sense, the addition of the Beaux Arts Ball to the IConcept runway show is extremely fitting.

Information for this article was gathered from heraldtribune.com.