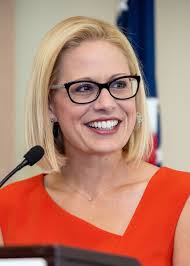 The Washington Examiner has uncovered emails from Arizona Democratic Senate nominee Kyrsten Sinema describing her participation in “feminist witchcraft.” On International Women’s Day in March 2003, Rep. Sinema allegedly called upon Pagan Cluster, a group of “feminist witches,” to join her for a peaceful protest against the Iraq War. In the same year, Sinema enlisted the aid of Pagan activists once more at an anti-war protest in Miami, Florida. Sinema wrote that she was “singing and spiraling in the pagan’s circle only five rows back from the police line.”

In preparation for the demonstrations, Sinema reportedly told the witches of Pagan Cluster to wear “colorful clothing and come ready to dance, twirl and stay in touch with your inner creativity and with the Earth.” On their blog, Pagan Cluster describes themselves as a “gathering of individuals and affinity groups who bring an earth-based spirituality to global justice and peace actions.”

Currently, Sinema is head-to-head against Republican Rep. Martha McSally in the heated Senate race for Arizona. Sinema’s involvement in “witchcraft” has been used by her opponent in negative campaigns.

Information for this article was gathered from the Observer.