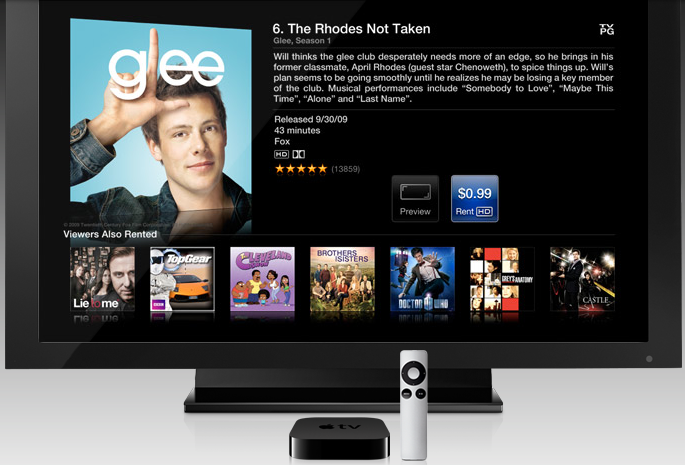 Internet television set top boxes have normally been the domain of tech- nology enthusiasts thanks to their relatively expensive price and the hassle re- quired to use one. Even Apple considered its Apple TV it launched in 2006 with a $329 price tag a “hobby” after sales were much lower than they had hoped. However, Apple hopes they’ve changed such devices from being a hobby to be- ing ubiquitous mass market devices.

For consumers, the most notable thing about the new Apple TV is its price. At $99, the Apple TV is well within the range of holiday gift buying budgets. Along with reasonably priced hardware comes affordable priced content. Until now, iTunes had TV shows and mov- ies availably for purchase, but with the introduction of the new Apple TV, users can now rent TV shows for $0.99 and Hollywood movies upon DVD release for $4.99. Netflix subscribers can also stream content from their Apple TV at no additional cost.

Simplicity is the other major factor. Apple CEO Steve Jobs noted they learned from the first Apple TV that consumers “don’t want to manage storage. They don’t want to sync to a computer … And they want silent, cool, small hardware.”

By plugging in Apple TV to a tele- vision, connecting to the Internet via WiFi or ethernet cable and signing into iTunes, users are ready to watch TV shows and movies. No need to go through the onerous process of downloading con- tent to a computer and syncing it to the device before being able to watch it. All content is delivered in real-time, streaming over the Internet or from a user’s computer. This eliminates the need for a built in hard drive and the higher price associated with building one in.

weeks before Google’s own attempt to launch a set top box of their own, Google TV. While Google TV has great potential, Apple has one major long term advantage: the iTunes Store. Though Google TV provides a slick interface to search through cable television channels and to surf the web to watch content for free through Hulu and other websites, Apple has a direct relationship to major movie studios and content providers. Google TV coexists with the standard cable set top box, while Apple TV cuts out the middle man. Although this may hurt Apple by limiting its content initially, it’s the first step to make cable

providers obsolete and eventually have all television channels delivered over the Internet instead of as a bundled service.

Even with Apple’s advantage of dealing directly with content providers, Apple TV has one major shortcoming: the lack of applications. Apple TV is pre- sumably based on a version of the same operating system the iPod Touch and iPhone utilize, but it doesn’t allow users to download applications from iTunes App Store. Including the App Store, which has largely been the secret to suc- cess behind the iPhone and iPod Touch, in Apple TV could have been one of the nails in Google TV’s coffin.

This shortcoming is not one of oversight, but of a strategy focusing on simplicity. After having tested the waters with the first Apple TV, Jobs said at the unveiling that consumers “don’t want a computer on their TVs. They want en- tertainment. This is hard for people in the computer industry to understand.”

In fact, Google “doesn’t under- stand.” When Google TV launches later this year it will be able to download the same applications Google Android mobile phones can. If Apple’s gamble proves to be the right choice, Google will have technology enthusiasts in their side of the ring while Apple will have the rest of the market to themselves.

Apple’s second major announce- ment was the unveiling of its very own social networking platform. Dubbed Ping, Apple’s foray into social networks enables users to “like” certain songs, “follow” their friends and favorite art- ists and recommend music to each other. When following others, users will be able to see friends’ activity on iTunes, such as events they are attending, music that they like, and purchases made with their account, similar to a Last.fm and Face- book hybrid.

In an effort to avoid similar privacy concerns to those of Facebook, Ping contains three simple privacy options. Users can allow others to follow them with their approval, without their ap- proval or not at all.

While Ping won’t surpass Facebook in its popularity, Apple doesn’t need to have the biggest market share to be suc- cessful as its proven time and again in the past. In fact, while Facebook has over 500 million active users according to its own internal statistics, it doesn’t have 160 million users in 23 countries with credit cards linked to their accounts. Simply put, Ping is another way for Apple to spark content purchases that’s taken on the guise of a social network.