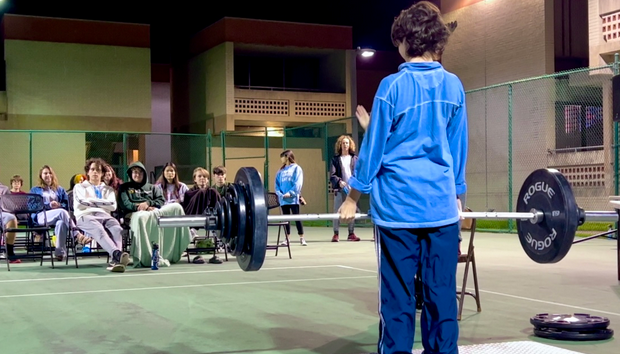 Do you even lift, bro? The New College Powerlifting Team does, and they’re ready to show off their hard work. After a semester of training, the annual Powerlifting Mock Meet went down on Nov. 18 from 7 to 9 p.m., in which students tested their strength and demonstrated the skills that they have built up over the semester. This year, the Catalyst attended and witnessed the overwhelming support of students who braved the Florida winter, reaching astonishing lows of seventy degrees Fahrenheit, filling the New College tennis courts and creating a lively evening.

The competition was split into two parts leaving an intermission in the middle. Even though the lights went out partially through the first half of the competition, members prevailed.

The Powerlifting Team has grown considerably since it was first formed in Fall 2018, but back then, held the same values of teamwork and personal growth.

“The powerlifting team is definitely a family,” former Powerlifting Team Captain Daniel Schell (‘22) told the Catalyst in a 2019 interview. “It’s easy to work out on your own and be in your own mindset but when you come together as a group, it’s a really good dynamic of everyone pushing each other.”

Now, four years later, many personal records were broken among the current team members, and the athletes were cheered on by a crowd of supportive friends and peers, pushing themselves and achieving new goals once more.

In addition to the lift meeting, sustainable Jabebo earrings were being sold with all profit benefiting the team. Using recycled cereal boxes, the artist brought attention to wildlife through their jewelry.

The event had a tremendous headcount, filling almost all of the seats available. This yearly get-together, which always seems to draw a heavy crowd, is a prime example of the supportive nature of the New College community.