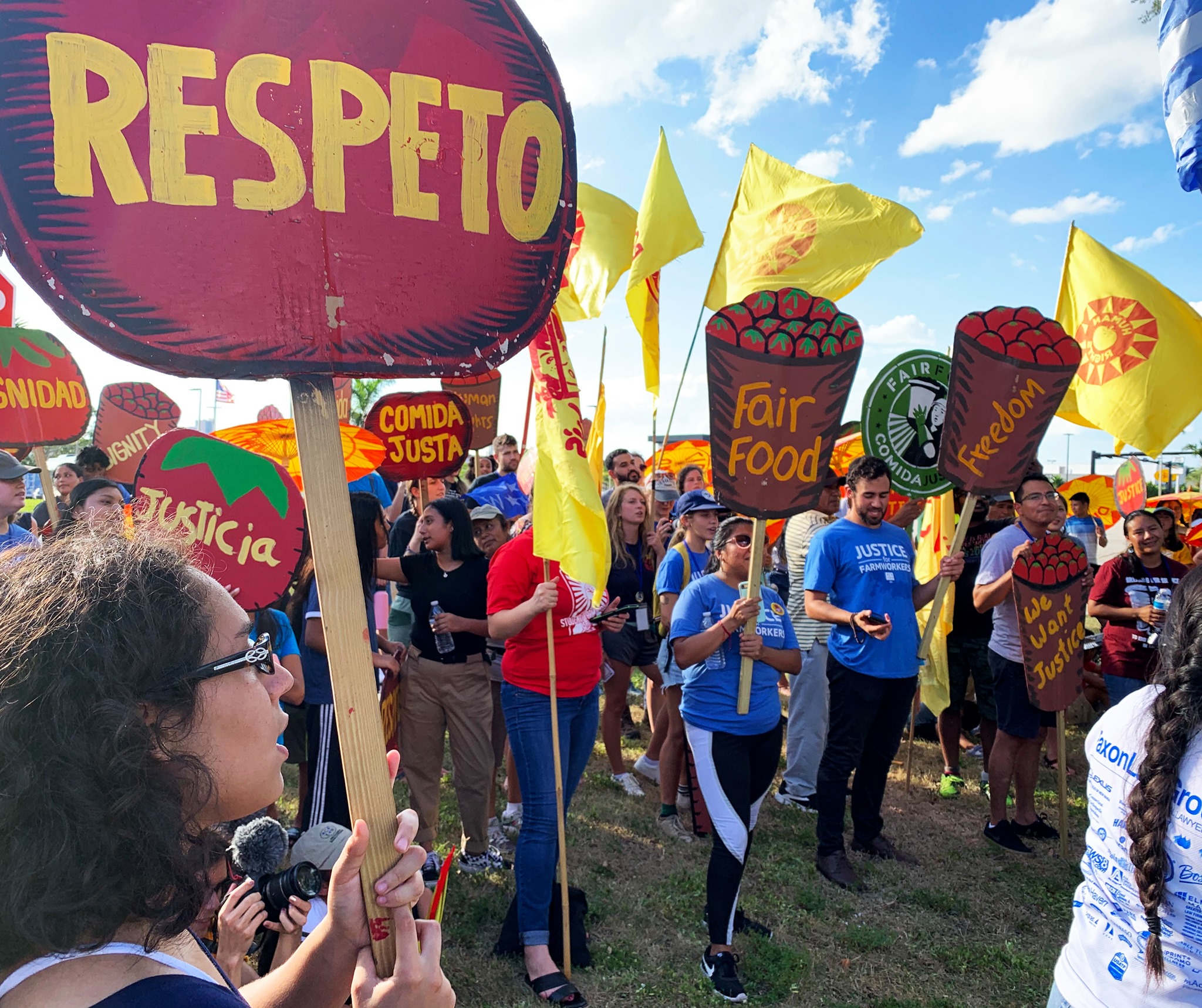 From Thursday, Sept. 26 to Sunday, Sept. 29, thesis students Lili Benitez, Nora Flower and Amaranth Sander joined farmworkers, their families and over 80 allies from 41 campuses and communities across the country at the 2019 Student/Farmworker Alliance Encuentro, held annually in Immokalee, Florida. The Encuentro, as highlighted by the Student/Farmworker Alliance (SFA) in their program booklet for the gathering, is much more than just a conference. Throughout the weekend, student allies to the Coalition of Immokalee Workers (CIW) bonded with fellow young activists during workshops, presentations and regional group meetings, cultivating a sense of community around the shared goal of ending injustice against farmworkers.

The Encuentro is hosted by both the Coalition of Immokalee Workers, a worker-based organization centered around the human rights of farmworkers and the Student/Farmworker Alliance, a national network of students and other young non-farmworkers who aim to support the CIW and their actions. Their current joint campaign demands that fast food restaurant Wendy’s signs on to the Fair Food Program (FFP), an initiative created by the CIW in 2011. The creation of the Fair Food Program has been incredibly successful in creating lasting change, so much so that the FFP model has been adopted by several other labor organizations across the world.

“The Fair Food Program basically holds [restaurants and grocery stores] accountable for certain working conditions that account for basic human rights that currently the workers are not given,” Flower said. “They have to have the right to complain about their supervisors, because that’s been a big problem where if they complain about the conditions they’ll get fired or they’ll potentially be deported, so they really don’t have a lot of power because a lot of them are undocumented. This gives them some power to complain, to get basic medical help when that’s needed, to report sexual assault. It’s really just an important way of keeping these companies, including Wendy’s, accountable for some basic human rights that all of these workers should be given.”

As the battle to get major fast food restaurants and food retailers to sign on to the Fair Food Program wages on, Encuentro attendees helped further the movement through their Boycott Wendy’s protest on Sept. 28.

“Everyone has roles for the protest,” Sander said. “Some people speak through the loudspeaker and do chants, some hand out water, one person gave a speech, some people hold signs. One of the most important roles is hand delivering a letter to the manager of the Wendy’s we’re protesting at talking about the Fair Food Program, and a group of people does that in a team. The roles are important because at every protest the Student/Farmworker Alliance wants everyone to have a purpose so they feel committed and personally invested in the cause.”

Skill-building workshops, held throughout the weekend, helped student allies feel involved and ready to act as informed activists within their own communities. “All About That Base: Organizing 101,” “@Wendys: Harnessing Social Media for Fair Food” and “Beyond Activism: The Nitty Gritty of Planning a Direct Action” were among the several workshops available for event-goers to attend.

“I went to one about writing resolutions, either to be in solidarity with the movement overall or to boycott Wendy’s and not allow Wendy’s to exist in that space, in a city or on a college campus,” Flower said. “Then we got a chance to talk in small groups about some of our potential plans to actually pass resolutions in our area, so that was really helpful. I also liked the variety of different workshops, they all seemed really strategic as far as going over different important parts of building an action.”

In addition to these workshops put on by the SFA, members of the CIW also gave presentations on their experiences within the movement along with how students can use their voices to amplify those of farmworkers. Benitez, Flower and Sander all emphasized that the point of being involved with the SFA and CIW is not to prioritize one’s own personal opinions and goals, but to share farmworker’s stories and spread awareness of the actions those workers are taking to combat injustice.

“We talked a lot about focusing on solidarity instead of charity,” Sander said. “A big theme of the weekend was how to be in solidarity with farmworkers and do your part, not because it’s charity and not because you’re being a good person, but because it’s your obligation to them because they’re the ones putting food on your table. That was a great thing about the conference, it was really about hearing from the farmworkers and helping to get their rights because that’s what they deserve.”

In the spirit of solidarity instead of charity, the SFA and CIW strived to make the Encuentro a space in which all attendees could feel comfortable sharing and learning from each other in whatever ways worked best for them.

“A good way that they put that into practice was that they created a multi-lingual space in the conference, so whoever was presenting presented in the language that they felt most confident speaking, whether it was English or Spanish,” Benitez said. “There was a translator the entire time for those who didn’t speak either language, so [it was about] having people feel comfortable talking and creating that bilingual space.”

Outside of conferences and workshops, the New College student group also enjoyed the casual aspects of the gathering through eating freshly made, authentic Latin American food and watching workers showcase their skills performing traditional dances and demonstrating how to make the perfect Mexican tortilla during the Café Cultura and fiesta Saturday night. The students were excited about getting the opportunity to live in an activist space for the weekend, surrounded by people who shared a mutual interest in the social issues that are close to their hearts.

Invigorated by their time at the Encuentro, Benitez, Flower and Sander have planned several campus events for the near future and are hoping to get many more New College students engaged with the SFA and the fight for farmworkers’ rights by the end of the upcoming spring semester.

“Basically, our end goal in all of this is to get a SFA chapter restarted at New College, because people have been really involved in the past and there are New College alums that work at the SFA that were there for the Encuentro,” Sander said. “New College has a very important history with this movement and we want to continue that and get as many people involved as possible. Also, we want to get people to be on the Steering Committee because this whole weekend is really organized primarily by students and young people and New College students could be a part of it.”

In addition to reestablishing the SFA at New College, the students have planned to bring a CIW member and SFA translator to a few classes on Oct. 24 to discuss the goals of the CIW and give students a chance to hear directly from a farmworker about the movement and how to participate. In the upcoming weeks, the group will also be hosting small events in solidarity with the SFA during their National Days of Action, which are Oct. 28 and Nov. 18.

“Next semester, after hopefully developing a foundation for a SFA on campus, we want to work with some local schools from Tampa and St. Pete and potentially Naples, people who we met over the weekend, to organize actions that will be collaborations between students from the different schools,” Flower explained. “Ultimately, the goal for the SFA chapter would be to pass a resolution in Sarasota to boycott Wendy’s, but that would be a long-term goal and we might not reach that before we graduate. We’re really just focusing on getting first, second and third years involved so that when we graduate, they can keep it moving forward and work towards making a stronger presence on campus.”

As the 2019 Student/Farmworker Alliance Encuentro came to a close, Benitez, Flower and Sander headed home, excited about all of the activist possibilities to come and ready to start turning their plans into reality.

“#BoycottWendys!” Sander cheered, with Flower and Benitez quickly joining in, showcasing how ready the students are to take action, make change and support the movement for farmworkers rights in whatever ways they can.

For more information about the CIW, SFA, Fair Food Program and how to get involved with the movement, visit ciw-online.org, sfalliance.org and boycott-wendys.org.

Information for this article was gathered from ciw-online.org, sfalliance.org and the 2019 Student/Farmworker Alliance Encuentro press release and program booklet.