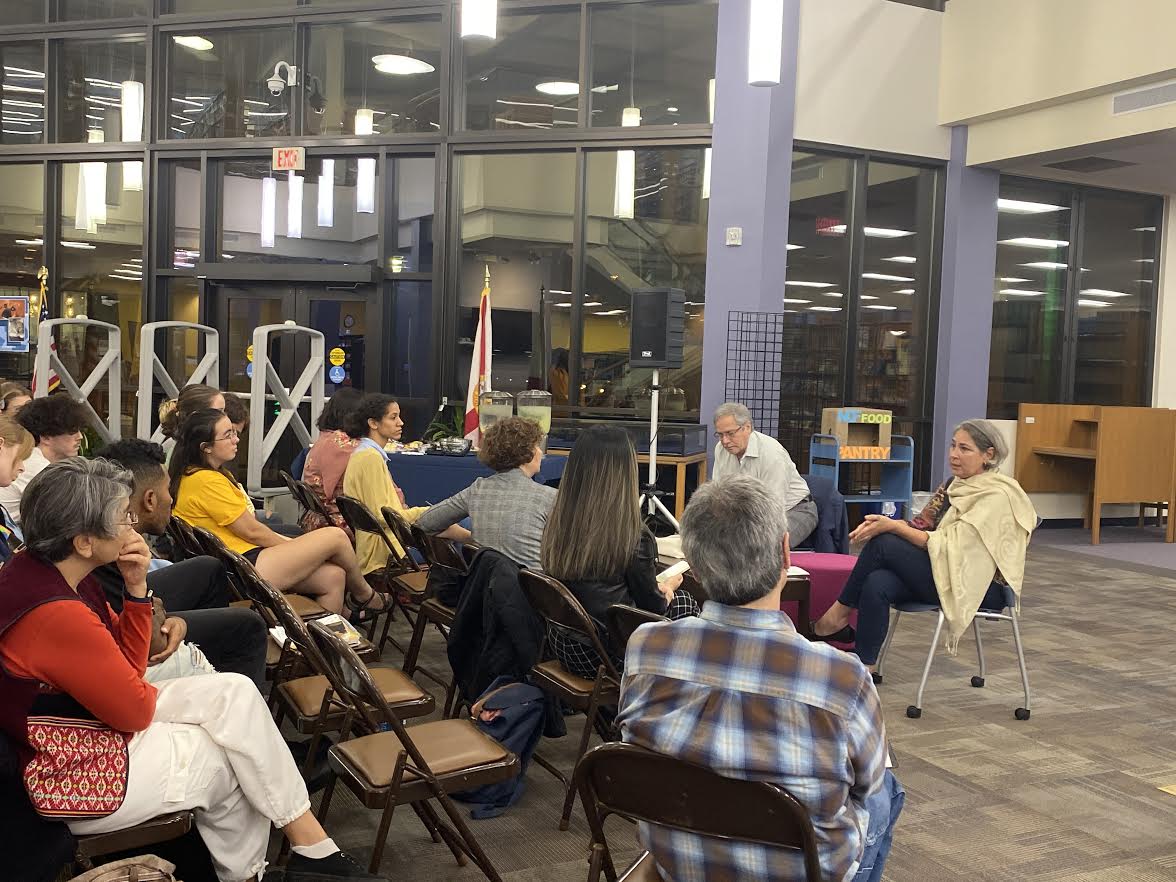 On Nov. 21, Anna Lidia Vega Serova a Cuban fiction writer, poet and visual artist was invited to talk about her creative work in the context of contemporary Cuba at the Jane Cook Bancroft Library. The talk “Vengo a ofrecer mi corazón” was given in Spanish and translates to “I am coming to offer my heart.” The day after, Serova participated in an open discussion for students from the Advanced Russian tutorial, Russian composition and conversation taught by Professor of Russian Language and Literature Tetyana Dzyadevych. Later that day, Serova amused students attending upper-level Spanish classes, taught by Professor of Spanish Language and Literature Sonia Labrador-Rodriguez, with personal writing advise as well as her perspective on the historical and contemporary issues of Cuba.

Serova was born in 1968 in what is today St. Petersburg, Russia, however, during that time it was known as Leningrad, a major city in the Soviet Union. Although her mother was Russian and Ukrainian, her father was Cuban and encouraged the family to return to Cuba soon after Serova’s birth. The couple reached an agreement and started a new chapter in Cuba with their newborn child. In 1977, the parents decided to divorce, leaving 9-year-old Serova to live with her mother for the latter majority of her childhood. While Serova and her mother leaped into a fresh start dwelling in different parts of the Soviet Union, Serova remained in contact with her family in Cuba but only occasionally got to see them until she turned 21 years old. At that time she rationalized a visit to her father and family in Cuba was well overdue.

“I fell in love with the climate, the people, the music, everything,” Serova said in a translated interview. “I never thought I would stay indefinitely, but I kept saying I wanted to stay for more and more time and now I’m still living there today.”

When Serova returned to Cuba she had almost completely forgotten Spanish and was solely writing in Russian. She participated in contests hosted by academic institutions in Cuba and won a few titles with work which had been translated from Russian to Spanish. In fact, her first published work “Bad Painting” was an outcome of winning first place in an annual national competition in Cuba. Serova credits the rise in popularity of her literature to the experimental Spanish-Russian syntax in combination with the circumstances of the time.

After the dissolution of the Soviet Union, Cuba entered a phase called ‘el período especial en tiempos de paz’ or ‘the Special Period in Times of Peace.’ In a time with very little food, no oil, no electricity, no transport; the new way of life had an everlasting effect on Cuban culture. A channel used to personify the reality of the impacts was through art, notably in literature. Serova entered the art world in Cuba shortly prior to the time when short stories dominated the field over novels or longer narratives. Producing short story anthologies became the fad of Cuba during the Special Period chiefly because of the lack resources, in this case being paper and ink. This paved a way for the people of Cuba to explore a larger variety of works by many authors in one collection.

At the first event where Serova presented her creative work in the context of contemporary Cuba, the audience was made up of mostly Spanish speakers along with a few Russian students and Professor of Russian Alina Wyman. For some parts of the presentation Wyman stepped into the role of translator. She translated questions asked by Russian students and answers from Serova from Russian to English for the audience.

Serova identifies as a 100 percent Cuban writer but was gracious enough to meet with the Russian composition and conversation tutorial. Serova invited the Russian students to explore topics from the talk given the day prior and engage in a dialogue about the short story titled “Russian Food” which the class collaboratively translated from English to Russian. Thesis student Miles Newmyer, a participant in the Advanced Russian tutorial, explained the perspective Serova added to the understanding of the prose that the class had translated.

“There is always ambiguity when you read something,” Newmyer said. “Especially in literature, the shorter the piece is, you’re left walking away with more questions [but] the story was semi-autobiographical.”

Serova emphasized that she likes to leave the interpretation of her short stories up to the audience rather than prescribe a definitive truth, but she was able to clarify some elements from the short story that students were curious about.

Additionally, Serova led a discussion for students in the multiple Spanish courses, including Lecturas Hispanicas, Literaturas del Caribe Hispanico and the tutorial miradas interculturales sobre género. Labrador hosted the event and invited the students to ask questions and participate in discourse. The discussion explored Serova’s transition from painting and other art forms to writing, issues during the Cuban revolution, questions about her short stories, her inspiration, writing advice and Cuban contemporary issues.

“I was worried about not being super proficient in Spanish but the conversation was so comfortable and casual,” third-year Spanish student Ella Rennekamp said.  “It was a really special experience to get writing advice [and] a look into the process of such an amazing writer. She is profoundly dope.”

Serova expressed great appreciation for being invited to speak and share her story and perspective at New College.