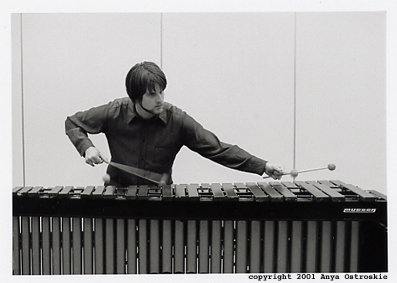 The New College New Music concert series launched its first of five installments Saturday Sept. 18 with a performance by Andrew McKenna Lee & Michael McCurdy linking the historical contributions of Bach to a contemporary and experimental approach to music.

The concert’s span ranged from the historical, featuring Prelude in D Minor BWV 999 by Bach, to the contemporary Unraveling  by Andrew McKenna Lee, a piece that included electric guitar and three loping machines.

McKenna wore socks onstage during some of the performance so that he could operate the complex system of electric peddles. McCurdy played a vibraphone to accompany Mckenna, as well as to preform Momentary Expanse by Tristan Perich; the piece included vibraphone as well as 2-channel one bit music which added an electronic element.

“We are interested in new music and experimental music but that does not mean that we are not interested in history. Professor of music and director of New Music New College Stephen Miles, said.

Miles explained that the theme this concert was dialog. Both between guitar and percussion as well as between the historic and the contemporary.

“What from tradition still has value and propose for us?” he asked. “In a post traditional society, it is not that traditions have gone away, it is just that their authority must be reconsidered, tested again and again, What happens when we rethink Bach in terms of everything we know about harmony today and everything we know about form? It is not about improving the Bach, it is about establishing a different relationship to the Bach.” Miles continued.

This years New Music New College season will present five shows that will seek to exemplify contemporary and experimental music. Of the five shows, three will be guest performances and two will be presented by New College students with possible contributions from the Sarasota community.

On Nov 13 and 14, New Music New College will put on a production of the John Cage songbooks. “We got our start performing the John Cage songbooks at the Ringling Museum.” Miles said. The New Music New College program calls Cage “arguably the most influential composer of the second half of the twentieth century… Cage invites multiple performers to perform simultaneous recitals, producing an acoustic environment that includes moments of great density as well as arresting stillness.”

“When I teach experimental music in theory or practice, or I teach contemporary music, John Cage is a figure we have to deal with,” Miles said. “This is also connected to what is going on in the classroom.”

Miles explained that the concert choices are related to the music students’ schedules.

On Jan. 14 and 15 the Jack Quartet will perform Georg Fredrich Haas’s In Iij. Noct. in total darkness in the black box theater.“What we are getting from them is just really cutting edge stuff,” Miles said.

The performance McKenna and McCurdy filled the Mildred Sainer Pavilion with an audience of New College students and faculty as well as listeners from the larger community. Now the community will wait in anticipation of the next four performances. “It just creates a much richer context for everyone for the students for the faculty and staff here and also for the Sarasota residence,” he concluded. ”Over time their sense of what contemporary music can be, what new music can be becomes ever more complex and richer. This is one of the reasons why the community has been so receptive.”