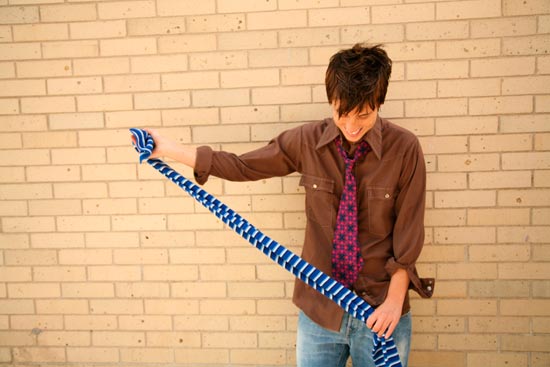 “I’ll start by telling you about some things I believe in, and what I believe is that we are all good people” were the words spoken by renowned spoken word artist Andrea Gibson to a gathered audience of twenty or so people at the Four Winds Café on Mar. 12. Hosting a workshop following the success of her performance in the New College Teaching Auditorium the night before, Gibson spoke about her beliefs and how art, and specifically spoken word “tells the truth in a way that inspires our hearts into action.”

Gibson, a graduate from St. Joseph’s College of Maine, has been writing poetry four about ten years, ever since, she admitted “I got my heart broken and I needed to scream about it.” Today, her words give voice to powerful issues like global justice, politics and gender/queer issues that can often incite both intense satisfaction and passionate anger.

Her notoriety stems from her awards, and as stated from her personal website, she won the 2008 Women’s World Poetry Slam, and has placed 3rd in world on two International Poetry Slam stages. Her first book, published by Write Bloody Publishing, Pole Dancing to Gospel Hymns won the DIY Poetry Book of the Year and was nominated for the prestigious Pushcart Prize. Gibson has been showcased on Free Speech TV, The BBC, Air America, CSPAN, NPR, and was featured in the documentary Slam Planet. She has released four full length albums and tours over 180 dates/year. Her book was just rereleased and Anis Mojgani, who performed in the Harry Sudakoff conference center on Feb. 19, did all of the artwork for it.

“I believe that hearts are good things and we all have them,” Gibson told her Four Winds audience. “I believe that when people are told the truth they make good decisions, and that we live in a culture where we’re not told the truth […] I think art has, especially in this culture, the responsibility to tell the truth and I am most moved when art tells the truth in a way that speaks to my heart. And [that is] the thing that I love about spoken word.”

Her workshop began with a simple question, but one not many speakers are aware enough — or care enough — to present:  “Why don’t we start by going around in the circle and telling us your name and what pronoun you prefer, if any? […] I’ll start, my name is Andrea, all pronouns are good for me, and I’m happy to be here…Welcome everyone.”

During the two hours, Gibson read poems by her spoken word contemporaries, opened up the floor for discussion on the topics within each poem and then had everyone write for about five minutes on what they felt about the poem, how it moved them or didn’t, and to imitate or try writing in the style of the poem.

“As a writer I can write and write and write or spend hours and hours writing but nothing has ever helped my writing more than listening really well to other people’s poems and noticing and paying attention to what moves me and what doesn’t,” Gibson explained.

Her performance on Friday night was to an almost full auditorium, and was littered with humor — both in her poetry and in the candor she delivered between poems — which allowed her audience to listen with ease as she spoke of hard topics. Before her first reading she turned away from the assembly, prepping herself “I always think I don’t remember how to do it, I should just do it.” Once she began, her voice resonated throughout the space and the bodies gathered there with the power of truth and her convictions, evident with her delivery, and at the end of each piece, she spoke an almost self-conscious “thank you.” Afterwards, she admitted that talking to people makes her nervous.

Many of her poems are set to music, eerily in tune with the rise, fall and climax of her voice and poems. In fact, her first delivered poem most accurately described it when she said “Sanity is not running from the window when the lightning comes, it’s turning thunder into grace, knowing sometimes the break in your heart is like the hole in the flute, sometimes it’s the place where the music comes through.”

After receiving a standing ovation at the end of the night, Gibson made sure to thank the students who helped make her visit possible: (year?) Mackenzie Pawliger and (year?) Jessa Baker-Moss.

“I wanted [Gibson to come to New College] to see her perform and I wanted to share this experience with other people,” Pawliger, the original coordinator, expressed. “I first heard about Andrea Gibson through a friend who showed me some of her performances on youtube. Her passion was evident in every performance of hers that I watched…each word of hers that I read. Also, the topics that she discusses and advocacy that she engages in are quite relevant to me. They parallel my interests, academically, politically, personally — and speak to my experiences.”

The job of organizing the performances proved to be difficult Pawliger explained to the Catalyst. “I never want to plan an event here again,” she joked. “That might be a slight exaggeration, but it is likely that it isn’t. I do have to say that it would not have been feasible without the help of several people, namely Jessa Baker-Moss. She was a Godsend and with her help, my abstract desire to see Andrea Gibson and bring her here became an imminent reality.”

To get Gibson here to perform, Pawliger and Baker-Moss had to request funds from both the Gender and Diversity Center (GDC) as well as the Student Allocations Committee (SAC). With $1500 and $2000 awarded to the cause, respectively, Gibson was not only able to perform on Friday, but was also able to to direct her workshop the next day.

“We need each other’s voices to keep us all together,” Gibson concluded at the end of her workshop. “Thank you.”