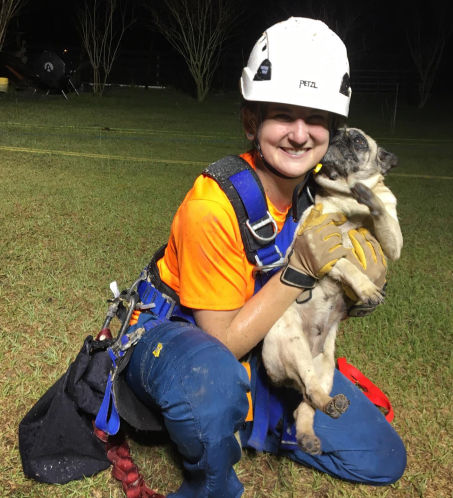 Ever found a cookie in a sinkhole? No? Well, someone did. The University of Florida (UF) College of Veterinary Medicine and Gilchrist County Fire Rescue pulled Cookie, the 10-year-old pug, out of a 30-foot-deep sinkhole west of Gainesville on April 5.

The owner called the pug’s name, and when Cookie took a step, a sinkhole formed underneath her. The veterinary team and fire rescue arrived on scene and approached the situation just like any other sinkhole-rescue scenario.

“When the sounds of her snorty-snort-snorts reached the humans above ground, they knew she was alive,” The Gainesville Sun reported.

But instead of harnessing down the sinkhole to rescue a human, Jennifer Groover, a fourth-year veterinary student, was hoisted down to rescue Cookie. The team successfully returned the pug to her owner.

“Sinkholes are a natural component of Florida’s landscape,” the Florida Geological Survey reported. “In the simplest sense, sinkholes are depressions in the land surface resulting from the dissolution of underlying bedrock.”

Sinkholes in Florida commonly form in limestone, a carbonate bedrock. When naturally occurring acidic rainwater filters through soil and through the limestone bedrock, a chemical reaction takes place. This dissolves small amounts of rock which are then carried away by the flow of the rainwater – overtime creating enlarged gaps and cracks in the limestone that sometimes lead to the enlarged cavities we call sinkholes.

Certain areas of Florida are more prone to sinkholes than others, simply due to the depth of sediment and the distance of carbonate bedrock from the surface. The area west of Gainesville in which this sinkhole was formed is considered an area in which broad and shallow sinkholes dominate because the carbonate rock is directly exposed or only thinly covered by other sediment.

Thankfully, Sarasota residents don’t have to worry too much about their own Cookie, because Sarasota and Manatee County are located in regions in which the carbonate bedrock is deeply buried, making sinkholes rather uncommon. But, rumor has it, you may not want to walk your dogs anywhere near Palmer E.

Information from this article was gathered from gainesville.com and dep.state.fl.us/geology