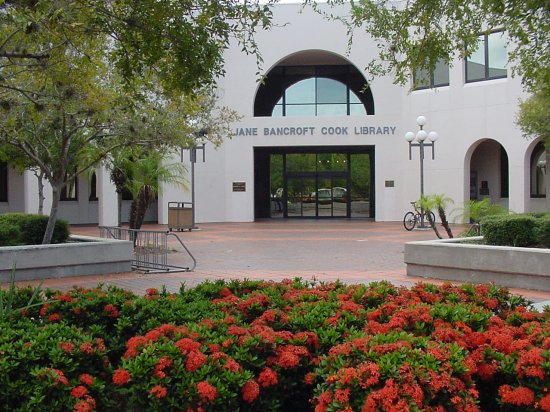 The Jane Bancroft Cook Library is a resource shared between New College and the University of Florida Sarasota-Manatee.

Amid the economic recession University of South Florida Sarasota/Manatee has faced budget cuts and lost over six million dollars in its state funding in the past few years.  It must reallocate its funds and is considering reducing its funding to the Jane Bancroft Cook Library in the upcoming year.

USF S/M will still plan to share electronic resources with NCF but may not fund the physical library.  Dean of Jane Bancroft Cook Library, Brian Doherty, is most concerned about NCF losing USF S/M databases and electronic resources because they are tied to USF and all of its satellite campuses.  Through the USF electronic resource system, NCF students gain access to more specified databases geared toward niche programs like Marine Science. If left to pay for its own databases NCF would be forced to narrow the breadth of its collection. Doherty said that the databases that NCF would definitely subscribe to include Art Store, J Store, NYtimeshistorical and sound recording databases. Though NCF can subscribe to the lowest tier for most databases it must pay more money per student to use databases because of its small size.

NCF receives databases from Florida Electronic Library — a free system of databases that caters to florida students and scholars. College and state-wide book and journal exchange programs would further help NCF adapt to less library funding from USF S/M. Uborrow will be unveiled in January 2011 and let NCF receive and send out inter-library loans. Students will have more control in loaning out books from other universities and be able to renew books themselves — Interim Director of Public Services, Caroline Reed, said that because of this, books will get to students much faster. Rapid is another inter-library loan system that focuses on journal articles. It pledges to get students journal articles within 48 hours of requesting them and was started in the late 1990’s after many of Colorado State College’s books and journals were destroyed in a flood. Rapid has grown to encompass over 100 colleges — including Harvard and Yale.

The New College Library Foundation fundraises for and purchases books for the the Cook Library each year. The library also receives private donations through the foundation. This grants cook library more flexibility in spending its money and enables it to ficus on periodicals and electronic resources.

If USF S/M were to stop sharing the library with NCF, Doherty still expects to see students from USF frequent the library. He loves that the Cook Library is a destination for local college students and the community. He says that he sees the library as being, “the regional state library” and that, “it enriches us to have different people here.”

Taylor Rothenburg, a first year student, said, “Its great to see people from the community using our [New College’s] resources and being enriched by them.” The library links NCF to the community and serves as a meeting ground for students, scholars and people trying to better their lives through books and academics.