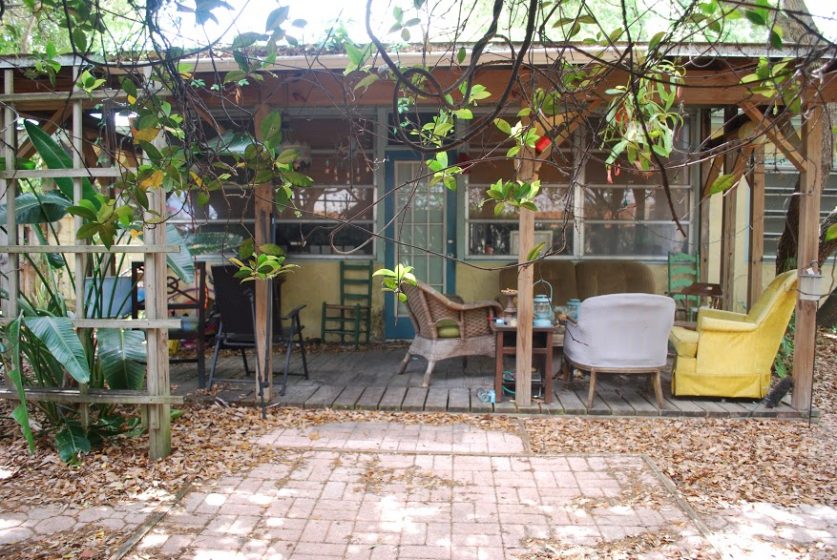 Some houses have a history. In the neighborhoods surrounding campus, there are many houses – too many to count – that have hosted generations of New College students within their walls. These homes have acquired names, developed characteristics and slowly collected piles of abandoned memorabilia. A lot of memorabilia.

One of these “heirloom” houses is called Steven’s House. Steven’s House is named so simply because it is located on Stevens Street. One of its current residents is Four Winds manager and New College alum Olivia Levinson (‘11).

“It was initially christened Steven’s mom’s house because last year all the people who lived there called each other a different type of mom,” Levinson said. “I was stepmom, for example.”

In a survey put out last week, 23 out of 32 off-campus respondents confirmed that the previous tenants of their house were New College students. To the question of “How many generations of New College students have lived there before you?” the survey received responses such as “more than I kno,” “too many to count” and “A million! But probs at least 10.”

Steven’s House has been in the New College family for eight generations, one of the longest standing heirlooms. Eight years back, the owners of the house moved out into a different home and started renting to students right away.

“They always talk about how they love the students, they love the college but they fantasize about moving back into the house and renovating it, so they might do that one day,” Levinson said.

Most homes in Florida are three bedroom, two bathroom, one-story houses. But then there are living rooms, dens, offices and the very popular Floridian sunroom. Students have proved to be strategic with these spaces and some off-campus houses have held up to 10 people at one time. Of course, a lot of couches and futons are involved.

“So there’s the garage, the sunroom, the master room and there’s the kid’s bedroom. I got the kid’s bedroom,” Levinson, a.k.a. “step mom” said. “Then we have the ‘pretty princess room’ where there’s a small TV and a spare bed for our guests with a canopy and twinkle lights. And there’s a rack where we all hang our dresses, like communal dresses,” she added.

Steven’s house is the closest house to campus in the Bay Shore neighborhood. On the next street over is Kegel House. Formerly known as Queer Cave and before that as Squat House, Kegel has been in the New College family for at least six years now.

For its current tenants, Kegel House came with a very special inheritance: Corps Grinder, a blue beta fish. Corps Grinder, affectionately known as Corpsie, has only been an heirloom fish once, this school year being only his second in Kegel. It is undecided whether he will be passed down to the next flux of students.

Most inherited items of heirloom homes are not alive. On the whole, there is a lot of furniture, artwork and – surprise – a ton of books. Several houses have created libraries of leftover books. One house has a four-year overdue library book that’s passed down tenant to tenant.

“We get mail that’s for tenants from the past like 6 years, alums that could be anywhere in the world,” Levinson said. “Artwork is always left behind, we try to do like big cleanses of all the stuff that’s not ours once a year.”

“It’s a very old house, it’s falling apart and the landlord owns most of the properties in that area so he wants to tear it down to build a new house for someone to live there permanently,” Kayla Evens, a third-year and current resident of the house, said. “It ends with us, I guess.”

This has happened before with another well-known heirloom house. Bay Shore House was torn down for its prime property right on the bay. Several students can still remember visiting it during its time of occupation or right after, when it remained abandoned for some time.

Sarasota is an old city, especially compared to other highly populated areas in the state, and many of its structures are ripe for renovations. As redevelopment often results in rent creeping up, keeping development at bay is a definite perk of heirloom houses.

“They [the landlords] have been wanting to up the rent but really because of loyalty to us they haven’t,” Levinson said. Sometimes not having to redo homes for the canon of appeal is a blessing for the owners as well.

“Our landlord last year told us either you have to keep bringing New College students or I’m gonna have to spend like $10,000 making this house habitable for any normal person,” thesis student Tricia Johnson said.

Johnson resides in Leeta House, a historic heirloom house for sure. Leeta’s namesake is its existence on Leeta Lane.

“The first person to live in Leeta was James Sheridan, then the former librarian, and he lived there 2005 or 2006,” Johnson said. “There used to be four different houses on Leeta Lane that were New College houses, two on the end, our house and one two houses down from mine. The one down from our house hasn’t been a New College house for a while so the three houses together were called the triangle and all the collective houses were called Leeta Lane.”

Leeta House has some fascinating heirloom items. One is a painting of Kanye West bolted on the side of the car port. “Almost everything in the house is inherited,” Johnson said. “Last year I cleaned out one of the closets and found this full-sized bunny costume.”

Signs of previous tenants also include more permanent traits. Walls are often painted and repainted, shelves are put up and new appliances are installed.

“It’s such a conglomeration of all the past people,” Evens said. “It’s weird because you go in there and you can see clearly all the things that everybody else has done. There’s these weird DIY art projects all over the place. Mostly it’s just like ‘oooh, I’m gonna paint the walls in triangles’ and then they do it because they can. Our house is so many different colors, it’s ridiculous. I guess it’s because, for a lot of us, it’s the first space that’s ours.”

In the case of one house, the “heirloom” concept has an additional dynamic. Professor of Mathematics Karsten Henckell has been renting a house off Corwood Drive to students since the mid-80s. Aside from a two-year period in which the house had Ringling students take over, the residents have all been from New College.

“I’m not sure how it all came about…the house is quite big and very suitable for students, and we just sort of fell into it, as turnover happened in August, right when it’s prime time for student rentals,” Henckell said in an email interview.

The house on Corwood used to be called Guitar Center. In its time, Guitar Center hosted band practice for Deep Links, a somewhat retired student band. With the last generation of students, the house was renamed Witch House after the music genre. Wikipedia defines witch house as “an occult-themed dark electronic music genre and visual aesthetic that emerged in the early 2010s.”

Most of the floor in Witch house is laid with terracotta tile; this – along with the wood-paneled cabinets, windows and doors – gives an earthy feel to the house and builds on the atmospheric warmth of a home that avoids using A/C.

The place came with some interesting odds and ends including a VCR tape of “Star Wars: Episode One” and a head scratcher. These have been sitting on a shelf above the TV set “at least since the last person who lived there.”

One house has been an heirloom home for an estimated 15 years– the grandmother of all. Jungle house is located across the street from the Succulent Society and is named so because of the lush covering of plants and trees surrounding its structure.

“The yard is covered in jungle-type plants,” third-year and current resident of the house Maia Owens said. “It has vines going up it and lots of palm trees and flowers. The whole road that it’s on is all jungly, yea it’s all woodsy.”

Most alums that have stuck in the area know about Jungle house. The landlady has owned the place since around forever and she’s just as old and mysterious as the house.

“Someone who went to New College 20 years ago said she thinks that she’d been in the house before,” Owens said. “There’s not many two story houses in Sarasota and when I described it to her she said she thinks she used to hang out there.”

Off-campus housing is limited to a select 150 of the school’s roughly 900 students. Perhaps this is one reason why houses are passed from student to student and why finding a house has become such a niche process. For instance, who needs sarasotahousehunt.com when we have the Forum? And the Forum has certainly proved to be a main source of housing finds.

“My room I found out about on the Forum,” Levinson said. “A lot of people were vying for it and essentially if you want a house you really have to push for it.”

Housing selection took place last week and, as a result, the Forum was burdened with off-campus room advertisements. More than 16 were posted just since the last week of March.

Some students are luckier than others in the house hunting game. The students currently living in Lady Foot locker house (previously known as Sass house) scored a full and smooth entry in. All four of the last generation of students were graduating. “They shifted out and we shifted in,” second-year Amy Bernard said.

In every interview for this article, I received at least 4 or 5 names of students and a tangent that goes something like “and before she lived there, it was *insert name* and they graduated in 2012….” I wish I had a month to work on this article so I could follow the trail of alums back to the origins of each house. But tracing the genealogies of New College heirloom homes would probably take a lot longer than a month.