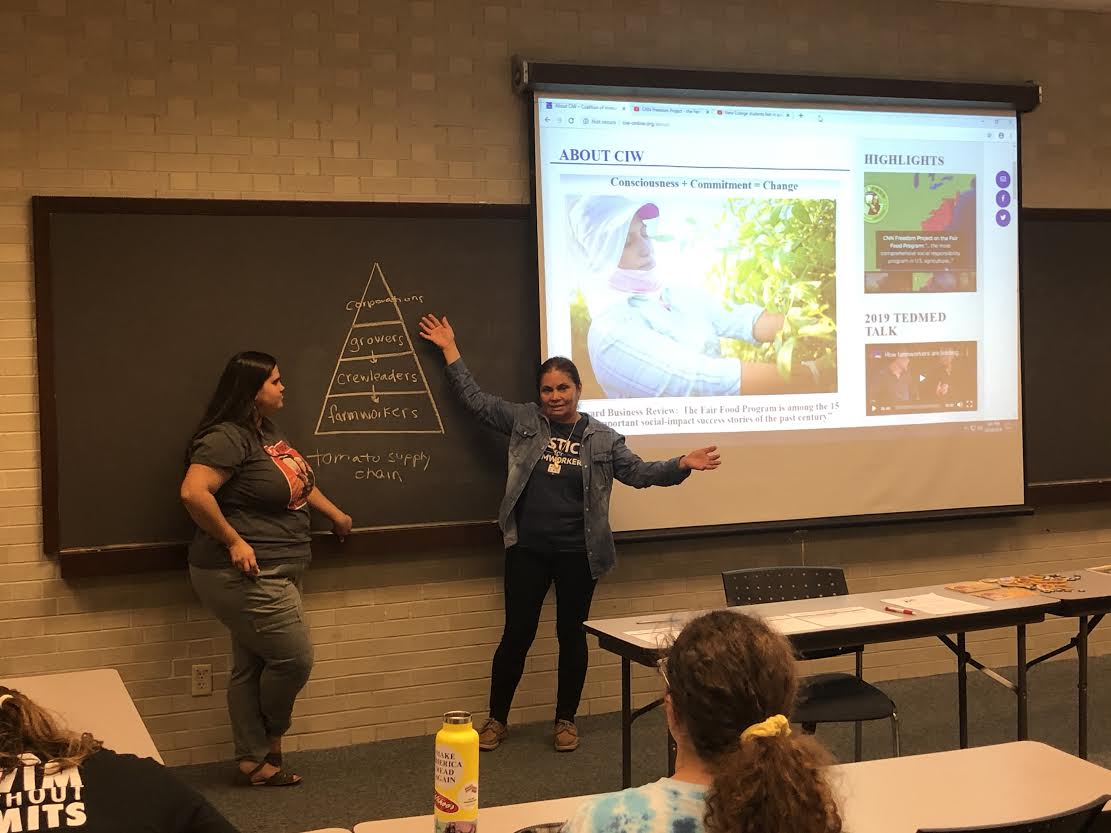 Photo courtesy of Hayley Vanstrum Rodriguez and Solis construct a pyramid representing the tomato supply chain, with farmworkers taking the worst abuses at the base and corporations which demand the most product possible at the cheapest price at the top.

On Thursday, Oct. 4, Coalition of Immokalee Workers (CIW) member Nelly Rodriguez and Student/Farmworker Alliance (SFA) employee and translator Yaissy Solis spent some time after their busy day presenting on campus to sit down for an informative dinner with New College students at An Evening with the Coalition of Immokalee Workers. This event, organized by the New College of Florida Student/Farmworker Alliance, allowed students to hear directly from a farmworker about the origins and future goals of the CIW, along with how students can play a major role in creating lasting and systematic change within the agricultural industry.

The CIW, founded in 1993, started as a group of six workers gathered in a church discussing the conditions they were facing, possible solutions and their own value in the system that had been exploiting their labor for decades.

“We realized that as farmworkers we were important, our labor is valuable and is essential to feeding this country and we deserve respect just as any other workers should,” Rodriguez, through translation by Solis, said. “A lot of the time, people think that because you’re working in agriculture that by default you shouldn’t have any rights, so you shouldn’t be respected or you should be seen as less, but that is not the conclusion we came to.”

As the CIW grew in size and impact, group members, which had been previously targeting growers to no success, realized they needed to take a different approach to get the results they desired.

“There was a fast food company that was doing business with one of the farms locally where we were harvesting, and there was an article that came out that said this company was going to do business with this farm year round paying wholesale prices for their tomatoes, and we made a connection,” Rodriguez said. “It’s these types of agreements between large corporations and farms that have been keeping our wages stagnant for over 30 years and continue to run down the wages and also the conditions that we’re facing.”

CIW members decided that in order to see substantial change, they needed to fully rework the tomato harvesting system that they find abusive. This is where the Fair Food Program (FFP), introduced by the CIW in 2001, came into play. The campaign had three major demands: insisting that corporations pay one extra penny per pound on tomatoes, requiring that farms adopt a code of conduct with zero tolerance policies for sexual harassment and modern day slavery and maintaining that workers would have a say in their own workplace conditions. The first corporation that the CIW targeted, Taco Bell, was a major success for the future of the movement.

“That essentially gave us the key to unlock the power of the market in the industry and we realized that it was these companies that were making the most profit off of our work and they were the ones that were extracting the most benefit,” Rodriguez said.

The CIW finds that while corporations play a major role in the continued exploitation of farmworkers, consumers are also complacent in maintaining the unjust structure of the tomato industry. CIW members, through their protests, workshops and public actions, seek to educate non-farmworkers on the moral cost of their produce and get them involved in fighting back against injustice.

“Our job was to get consumers to realize their position within the industry and how much power they actually have over the corporations,” Rodriguez said. “[We wanted to] get them to work together with us to demand that the companies use the same power they were using to get the best prices for them to actually demand human rights.”

Students, including those at New College, have played a major role in spreading the CIW’s message through their work within the Student/Farmworker Alliance, a supporting network of young people dedicated to securing farmworker rights established in 2001. In 2017, New College SFA members participated in a rolling fast, in which 13 universities across America fasted in solidarity with Immokalee farmworkers and their campaign.

“It was pretty incredible,” Rodriguez said. “[The campaign] has been very long, so many people have been involved, but we know that we’re going to win. We know that victory is on the horizon, we just have to keep pushing harder.”

Although the CIW is always looking forward and thinking about future progress, the group has a lot to be proud of in terms of what they have accomplished so far. CIW members can now go into the fields and educate workers about their rights along with how to report abuse without fear of retaliation or potential job loss. All reported cases of modern day slavery have been eliminated since the introduction of the FFP, 14 corporations in total have signed on, over 2,000 complaints have been resolved and over 32 million dollars have been distributed to workers through raised wages. Additionally, workers in other states and industries, such as Ben and Jerry’s dairy farmers in Vermont, have been able to use the methods implemented in Immokalee to demand that their own farms and connected corporations eliminate unjust working conditions.

While Food Chains, the documentary that the New College of Florida Student/Farmworker Alliance aired the following Saturday, Oct. 26, focused primarily on the CIW’s continuing fight to get Publix to sign on to the FFP, the group is currently focusing most of its efforts on their #BoycottWendys campaign, encouraging consumers to stop eating at the fast food restaurant until the company agrees to the CIW’s conditions.

“We’ve been pressuring Wendy’s for over four years to join the Fair Food Program, inviting them to be a part of the solution, to join all of their competitors in doing this, but instead they have turned a blind eye,” Rodriguez said. “Instead they continue to do business with farms where there is harassment, child labor, wage theft and all of these conditions without any consequence whatsoever. We have a national boycott, which is why we lead presentation like this all over the country, but also here at New College, hoping that you all can be aware of the boycott, participate, join us and get more involved in what we do.”

Information for this article was gathered from ciw-online.org and sfalliance.org.