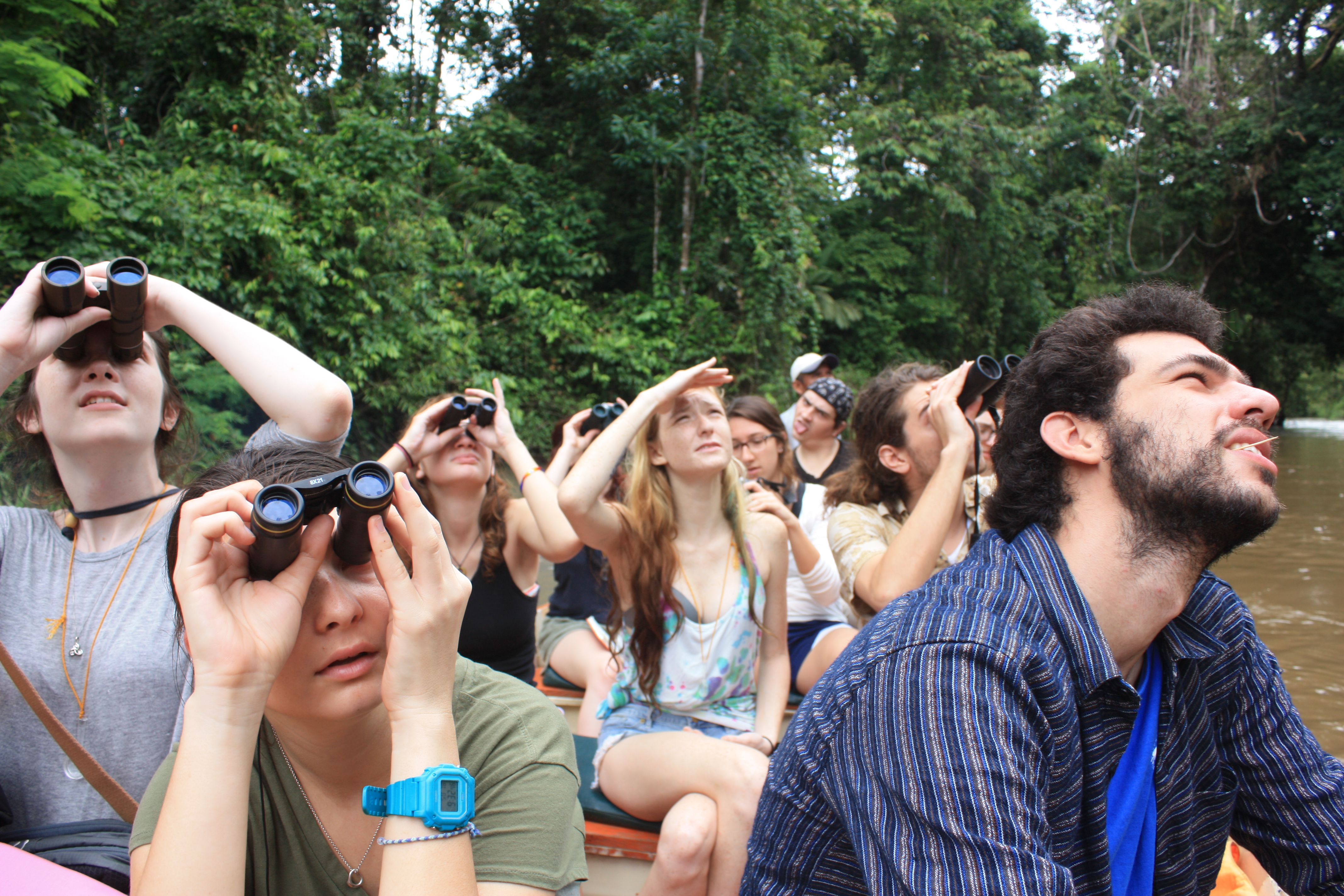 Fantastical insects, glowing fungi, leaf-cutter ant colonies and glorious sights of canopies stretching as far as the eye can see. These are just some of the wonders the Canopy Ecology ISP of 2015 came across during its stay in the Peruvian Amazon. Composed of 14 New College students, the ISP spent a week concentrating on the region’s literature in addition to Canopy Ecology texts before boarding a plane to experience the Amazon first hand. Mostly of Natural Science backgrounds with a focus in insect-plant relationships, the group conducted a number of experiments amidst the grand biodiversity of the rainforest.

After flying into Lima, Peru on Jan. 15, a short flight took the students back north to the city of Iquitos, located in the northeastern Amazon Basin of Peru. Here, we were picked up by our new and soon to be cherished Explorama Lodge tour guide, Abelardo Hidalgo. Abelardo had his arms open from the start, he was witty and infinitely knowledgeable throughout the trip, eager to share his world with us. A boat ride up the Sucusari River took us all to our first destination: the Amazon Conservatory of Tropical Studies (ACTS) Research Lodge, home to one of the longest canopy walkways in the world.

The group spent three days at ACTS where the majority of the experiments were completed and our canopy ecology craving was fulfilled with a minimum of two treks up the walkway per day, where we would ascend over 115 feet into the tree tops. Each lodge stuffed us with unbelievably delicious meals, with anything from fresh papaya, rice, potatoes, lettuce with lime and various meats and fish, always prepared uniquely.

Explorama Lodges was founded by Peter Jenson in 1964 with a clear goal of maintaining primary rainforest reserves around each lodge and educating every guest on the surrounding wildlife along with the culture of the local riberenos, “river people.” Explorama has four lodges: ACTS Research Lodge, ExplorNapo, Ceiba Tops and Explorama Lodge, three of which the group stayed at, excluding Ceiba Tops. The lodges were thatch-roofed resulting in a constant sensation of being surrounded by the forest with all of its sounds and scents. ACTS was complete with a dining, laboratory and conference room in addition to rooms with mosquito-netted beds. A trail led right from ACTS to the Canopy Walkway entrance, crossed in a 15 minute walk through the virgin amazon forest where any spectacle was possible.

After an incredible stay at ACTS, the group had to move on to the next part of the expedition. Abelardo led the mile hike to the next lodge: ExplorNapo. Before reaching the lodge itself, we were treated with a visit to the Ethnobotanical garden on the outskirts of the lodge. A large, circular hut stood just beyond the garden and a shaman with many secrets awaited our arrival. Shaman Guillermo Rodriguez welcomed us into his realm of knowledge and explained his responsibilities as the local doctor and natural healer.

“I was shocked when the shaman said that mental illnesses such as depression and anxiety don’t exist in the Amazon,” Grace Bishop, first-year and a member of the ISP group, said. “What was their secret? It really made me step back and look at the sort of life I want to lead in the future.”

After introducing himself and his line of work, Shaman Rodriguez passed around some of the plants grown in the garden for his professional use. Cocona, a popular and tart fruit, was described as “jungle insulin” due to its ability to soothe diabetic pains. Shaman Rodriquez walked around with Dragonblood, 100 percent pure sap from the Dragonblood tree, and offered it to anyone with a mosquito bite (in other words, every person in the group) as it calms itching from the bites. Next was a bottle of Iowaska, boiled with other liquids to create a dark, hallucinogenic beverage used as a rite of passage for shamans to fully understand its effects to then prudently prescribe the medication to those in true need. Another medicinal plant was the Golden Button which has numbing effects and is used for tooth aches by chewing on the stem of the flower.

The shaman offered the group the chance to be cleansed of negative energy through a traditional ceremony. In small groups, we all received the shaman’s blessings; while chanting a sacred song, Shaman Rodriguez blew thick natural tobacco smoke behind the center of our heads and brushed our backs with a pom-pom like palm leaf. At the end of the ritual, we were given an invigorating rosewood oil to pass over our faces.

The last lodge was Explorama where we watched a presentation from the Yagua tribe, visited a molasses factory, went piranha fishing, toured a clinic and got to talk to Linnea Smith, a somewhat legendary doctor who one-handedly established the clinic and opened it for service to the area. She has a family-like relationship with Explorama and gets her meals from the lodges as well as all kinds of company. Mainly, her services include family planning (likely the most significant mark she has left in the region), vaccinations and other care such as dentistry. She is now a vital resource to the area and has changed the lifestyles of the locals.

The Canopy Ecology ISP did most of its academic research and field work at ACTS Research Lodge. There were four main experiments: Leaf Damage Assessment (led by sponsor Christopher Frost), Malaise Trapping, Chemical Ecology and Leaf-Cutter Ant Testing, each revolving around Canopy Ecology. Our first and main experiment was contributing to Frost’s seven-year data set recording the leaf damage in the understory and canopy. The damage was assessed based on a scale created by Frost himself. The goal was to estimate how much herbivore damage each leaf has by looking to see what percent of the leaf was left. Each student set out and recorded the level of damage on at least 200 leaves in both the understory and the canopy.

“I am currently planning to use the entire dataset and the methodology for collecting as the centerpiece for a chapter in my upcoming book on canopy ecology,” Frost said. “It is fair to point out that the dataset isn’t complete, the contribution of the 2015 ISP group is part of an ongoing long-term dataset that will hopefully continue for many years.  It’s part of a project I have called the ‘The Million Leaf Project’, in which I intend to collect damage counts on 1 million leaves.  Thus far, the dataset has about 100,000 leaves counted, so it’s about 10 percent of my goal,” Frost explained.

The Malaise Trapping experiment was a simple one. The group hung four traps in a daisy chain from one of the walkway platforms, spreading them out so as to have two in the canopy, and two in the understory. The second day, the group implemented a manipulation factor of Jasmonic Acid, a chemical known to attract insects. After each of the two days, the insects were taken out and separated into vials. It was decided, retroactively, that the experiment had to be replicated more times to be able to extract any solid conclusions from it.

The chemical ecology experiment tested the phenol content of different leaves. The group grinded leaves with acetone, straining the liquid into a vial and evaporating the acetone over the heat of a kerosene lamp. Paper Chromatography was the next step. The extractions were dotted onto filter paper and dipped in a solvent which seeped into the paper and flowed upward, carrying the extracts at different rates, depending on the phenol levels.

The last experiment involved interacting with a colony of leaf-cutter ants by testing which chemically altered filter papers they’d pick up. The test used salt, water, leaf extract, sugar and other factors, all of which were picked up by the colony and carried into their home gardens, with the exception of the leaf extract paper, most intriguingly. Plating, a method used to preserve, was also done over the trip. The plates were sprayed with isopropanol and the specimen were placed in the center of the plate and pressed down until in place. Last, the plates were topped and wrapped with parafilm. Ross Joseph, a thesis student with a Biology AOC and focus in Mycology, plated some of the insects from the traps as well as several leaves and even species of fungi.

“Of the mycological specimens encountered in the field, several species of Ganoderma and Cordyceps were found and sampled in addition to many unidentified species,” Joseph said. “Given the overwhelming number of unidentified species of fungi, especially in tropical regions, further research and conservation efforts in these areas are imperative for the discovery of new organisms which hold the potential to benefit medicinal and environmental fields.”

The People of Peru

During its stay in Peru, the Canopy Ecology ISP interacted with two main groups of people: the Yagua tribe and the community of the Capironal village. The interactions with the two groups were exceedingly different and resulted in two polarized experiences, each individual yet both equally significant.

The meeting with the Yagua tribe was arranged through and set at the Explorama Lodge. An Explorama Guide stood in front of a bench lined with men, clearly Yagua from their traditional clothing and, in a way, by their profound expressions. The guide began to discuss the history of the Yagua Tribe, beginning with their close ties to Explorama. In 1984, tourism was getting so big that Explorama developed an agreement with the Yagua tribe to show tourists a part of their culture in exchange for the promotion of trade with their hand-crafted goods. The guide then moved on to a stronger part of history, one that began in the late 1800’s and perhaps was recalled too sharply for the audiences’ comfort. The rubber boom of the time had begun to devastate the forest and those from developed countries came to claim their cut, literally. Their manifestation in the Amazon resulted in the exploitation of previously untouched cultures, including that of the Yagua tribe.

Such exposure of cultures to urbanized peoples resulted in many forms of globalization; for example, the Yagua tribe began to wear modern clothing and speak Spanish, the size of families decreased and expectations developed: to become a teacher one now had to go to school and get a degree.

The guide explained how the tribe wore traditional outfits to tie with their demonstration but, on a normal day, they would be sporting Nikes and other modern brands and life would continue without incorporation of traditional customs. After the guide finished his introduction, the Yagua showed us their dances taken from old celebrations and often honoring animals such as the Anaconda. So, the group essentially was introduced to the history of the culture of the Yagua tribe instead of the very community of people which sat before us, ready to entertain our ideas of tourism. Yet, the children danced and smiled with us and the Yagua benefited from our ecotourism and went home to their village where they lived their private lives. It was just another day for the Yagua tribe, and perhaps not such a bad one financially.

However, the group’s experience with the Capironal village was considerably different and fulfilled the desire to meet the locals. The group’s interaction with the village was remarkably personal due to Abelardo’s choice to act as our translator. We finally got to meet people with their names instead of their past and share something universal with them: a game of soccer. From this, there is one important fact to remember: Peruvian children are practically professional soccer players.