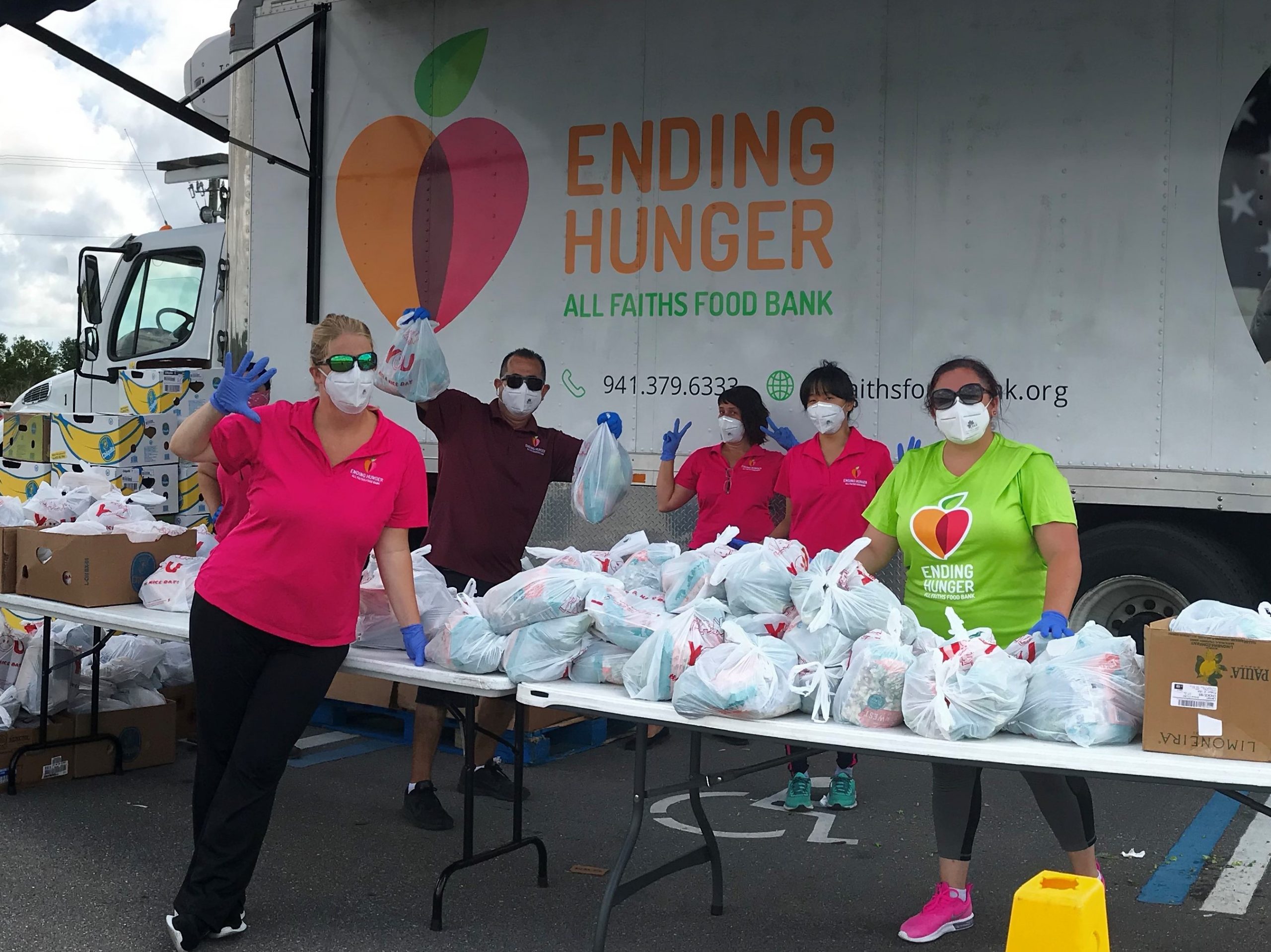 Every year during Florida’s balmy winter months, tomatoes, green beans, peppers and cabbages ripened by the ever-present sun are picked, packed and shipped across the continental United States. Much of the produce goes to restaurants, schools and theme parks, but this year, shuttered industries and disrupted supply chains have forced the state’s farmers to allow the sun-ripened fruits of their labor to wither back into the earth amidst the ongoing COVID-19 pandemic. As millions of pounds of produce go to waste at farms, increased food insecurity due to skyrocketing unemployment rates has diverted astounding proportions to the shelves of the nation’s food banks, which are working hard to serve an unprecedented number of Americans in need of emergency food aid. In Sarasota, All Faiths Food Bank has led the charge.

“Every day we are all discovering new and unfortunate consequences of the closure of all businesses and the impacts on lives and the supply chain,” Frank said. “Farmers have lost their consumers, especially in terms of the restaurant business, and how that has affected us is—I don’t want to say fortunately—but it is a windfall for food banks.”

All Faiths has ceased accepting food donations from individuals due to health and safety concerns, but Frank said the food bank is still graciously accepting food from retailers, wholesalers, farmers and other growers and that food banks are “a crucial mechanism for getting excess produce from farms into the community.”

Frank also lauded food banks’ close relationship with the state’s farmers prior to the pandemic, which she described as making a difficult situation somewhat easier for both parties.

“That 72 percent increase [in pounds of produce] indicates that the farmers know that we are a powerful conduit to make sure that their produce gets into the hands of those who need it,” Frank affirmed. “The surplus is extraordinary and unparalleled, but All Faiths and all of the Feeding Florida Food Banks are just pushing millions of pounds of additional produce out into communities who very much need and want fresh fruits and vegetables.”

The sudden loss of vital consumers has been felt most strongly in the farming industry, Florida’s second-largest economic driver. It yields $155 billion in annual revenue and supports about 2 million jobs. Many growers have donated produce to food banks, but there’s a limit on what the charities can accept and storage is an issue for perishable fruits and vegetables.

State Agriculture Commissioner Nikki Fried has recently launched a new website called “Keep Florida Growing” to connect consumers to farmers who have excess crops during the coronavirus pandemic. Individuals as well as bulk buyers, food banks and consumers can connect with farmers using contact information provided on the website’s “Florida Farm to You” commodities list.

“There’s no silver bullet to solving the decreased demand from food service businesses, but by connecting our agricultural producers with willing takers, we can help move Florida-grown products from fields to consumers,” Fried said.

Despite the challenges in produce preservation, All Faiths has maintained a turn-around period of 24 hours for fresh produce with a skeleton crew of 12 long-term volunteers out of a pool of 4,000 annual volunteers. In order to keep up with excess supply and increased demand, All Faiths has opened dozens of new mobile distribution sites where recipients can remain in their car while workers place boxed meals in their trunks. Volunteers and staff have worked long hours to continue distributing massive amounts of food throughout the two counties.

“Our staff has been working their regular jobs as well as working the warehouse and working distributions,” Frank said. “Right now, today, my Chief Developmental Officer is working at a drive-through in Venice and one Sarasota, one in the morning and one in the afternoon—it is astounding.”

Approximately 37 million Americans struggled with hunger before the pandemic, according to Feeding America, a nationwide network of food banks that All Faiths is a member of. Nationally, about one in three people seeking groceries at not-for-profit pantries last month have never previously needed emergency food aid, and approximately 22 million people have filed for unemployment in the last month, obliterating a decades’ worth of job growth and forcing many Americans to choose between paying bills and eating.

“Service industry workers are coming for food because our area is so dependent on the service industry and hospitality here, but also as you look around you see people working in finance and healthcare, attorneys being laid off, it’s just the entire continuum, all walks of life,” Frank commented. “It’s short term, and they’ll go back to work—it might be three months or six months—but right now, they need food.”

With thousands of parents unemployed and children out of school, All Faiths has also accelerated its Campaign Against Summer Hunger and has partnered with the Sarasota School District to help feed children at eight area schools, as well as through local Boys & Girls Clubs, Children First, Girls Inc. and the Early Learning Coalition. Frank emphasized the need for increased federal support during a period of growing demand in which many children eligible for free or reduced-price lunches are unable to access those meals.

“There’s no way a food bank can make up for the federal school meal, Women Infant and Children (WIC) or Supplemental Nutrition Assistance Programs (SNAP),” Frank asserted. “We are supplemental.”

“What would be helpful for us is continued support from the Department of Agriculture for emergency food assistance programs—I want to encourage our federal government to support and expand those programs, because it helps the farmers, it helps the food banks and it helps the people who need the food.”

In the past week, 20 federal lawmakers from Florida and Commissioner Fried sent letters urging U.S. Agriculture Secretary Sonny Perdue to include Florida farmers in federal food purchase and distribution programs so the surplus crops can help feed the hungry and food insecure. The federal coronavirus relief act contains $9.5 billion in aid to farmers, but did not expand SNAP benefits with the passage of the law.

According to an official statement on the Coronavirus Aid, Relief, and Economic Security (CARES) Act from Feeding America, “By not increasing SNAP benefits, lawmakers missed an opportunity to help families facing hunger and, unfortunately, food banks will bear the burden of this oversight. SNAP is this nation’s first line of defense against hunger and for every meal that the Feeding America network of 200 food banks and 60,000 food pantries and meals sites provide, SNAP provides nine.”

Frank emphasized that vulnerable communities are looking for reassurance amidst an unbelievably uncertain time.