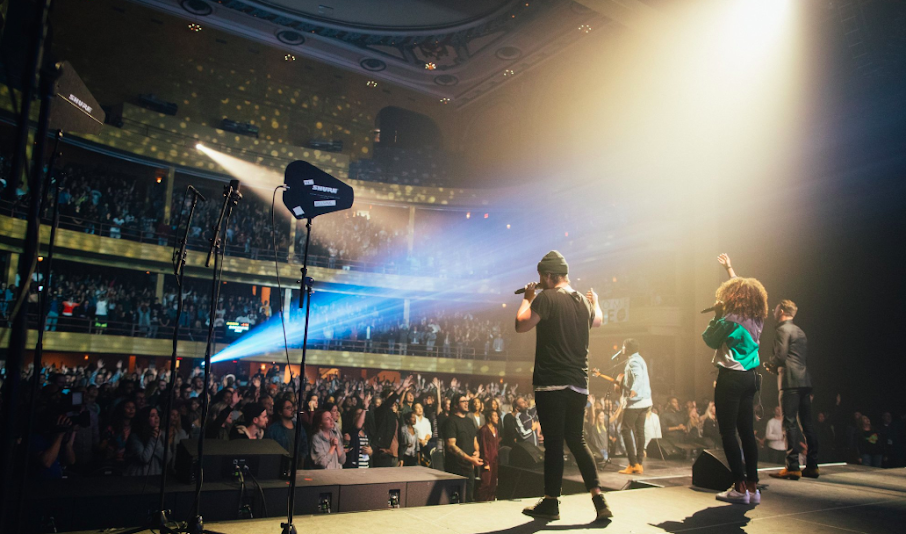 By Bree Nieves and Cassie Manz

Celebrity pastor Joel Osteen has more than one million followers on Twitter. According to Nielsen Media, more than 10 million Americans watch his televised sermons every Sunday morning. Osteen’s Lakewood Church in Houston, Texas is the largest church in the country, with an attendance of roughly 52,000 every week. It’s a good example of the megachurch phenomenon. Tangent writers Cassie Manz and Bree Nieves set out to uncover the hype and history behind megachurches, talking to students, professors and attending a local church along the way. Hillsong Church is another example of an international megachurch that began nearly 35 years ago in Australia. It is known for its famous Christian band, Hillsong United, who have written hit singles including “Oceans (Where my feet may fail),” and “Lead me to the Cross,” released in 2013. 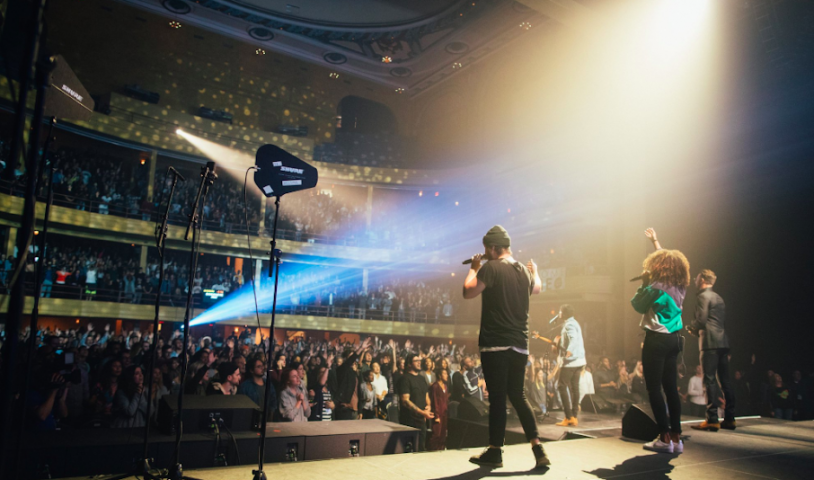 Attendants of Hillsong Church in New York City gather on a Sunday Morning.

There are 2.42 billion Christian believers in the world as of 2018. Megachurches are a large part in the trend in which religion, specifically Christianity, has become commercialized, commodified and sold to wide audiences within and outside of the U.S. According to the Hartford Institute for Religion Research, the term “megachurch” refers to “any Protestant Christian congregation with a sustained average weekly attendance of 2,000 persons or more in its worship services, counting all adults and children at all its worship locations.”

Technological gains in the past 10 to 15 years have transformed many Christian churches that were formerly only able to reach hundreds of people to now reach millions. This offers transnational possibilities for community building and radically changes the evangelical mission of most churches. Churches typically focus on service, missionary work and fellowship.

Interfaith critiques of megachurches concern their indoctrination of the Gospel of Prosperity and their “Rock Star” Christian attitudes and theatrical service performances.

The Gospel of Prosperity is the belief that through faith and works God will bless you with material gain and worldly prosperity. This isn’t necessarily true of all megachurches but it has been marked as the reason for Christianity becoming a lifestyle versus a theological discernment. Paul Tillich defines faith, as the “Ultimate Concern,” where man’s ultimate concern in life is an existential concern, the union of the self and God, with or without material gain.

“Rock star” Christianity refers to the smoke, lights, art installations, full band and chorus accompaniment found in most praise and worship celebrations at the beginning of service. This is in stark contrast to the traditional psalms recited in the Catholic faith and more traditional Protestant, Eastern orthodox, Lutheran, Methodist, Mennonite and other denominational services.

Tangent writers Cassie Manz and Bree Nieves took a trip to a church in the local Sarasota area, The Tabernacle Church, to see if it fit the criteria for “megachurch.” From the highway, with a large, nondescript building in sight, it looks like it might. However, after arriving to the Sunday service, Manz noted that we were in a gymnasium, with a multitude of raised basketball hoops, and not in what we imagined would be a megachurch. That Sunday, there was roughly 150 people in attendance, nowhere near the numbers a megachurch usually brings in.

The Tabernacle, a non-denominational Christian church that has been in the community for 61 years, is currently raising funds to complete work on their new worship center, which will be much larger than the gymnasium. The gymnasium was also used by the Tabernacle Christian School, which closed in the summer of 2016.

Although the Tabernacle is not a megachurch, the “Impact” campaign’s promotional video for the new worship center, posted on their website in 2014, hints that it might be moving in that direction. The projected design plans and promotional language of the video fit the image of many other megachurches.

“I want you to go with me right now as we look towards our future and see the facilities that we believe God would have us build on this campus,” Pastor Dwain Kitchens said in the video. An animated simulation of projected plans for the building, including the new worship center, located north of the gymnasium, follows.

Inside the new building will be a “much needed gathering area,” with a welcome center and a cafe, “all designed to encourage fellowship time for our people,” a computerized voice narrated. The plans also include an area for “kids’ corporate worship time,” called the Power House, which will have “stadium seating, bright colors, light and sounds.” Lastly, the video shows the dedicated worship center as “an inviting space for our people and others who may soon join us in worship together,” the narrator said. The worship center will have “a great mix of lighting, sound and a flexible stage design for the variety of events to be held here at the Tabernacle,” the narrator finished.

Although the word “megachurch” is never mentioned in the video, the emphasis on sound and lighting–and the cafe and the amped-up children’s center–are all characteristics of megachurches. Christ Fellowship, the seventh largest “participating” church in the country ranked by membership in Outreach Magazine’s 2017 annual report, exhibits many megachurch features.

The church started in 1984 as a “small Bible study with 40 people in Dr. Tom and Donna Mullins’ living room,” according to the church’s website. Based in Palm Beach Gardens, it now has nine different locations throughout South Florida, what they call “regional campuses.” The church has an app and streams live online, making sermons and services available 24/7. According to Outreach, 26,200 people attend Christ Fellowship each week, with over 50,000 watching online. This is what clearly designates Christ Fellowship as a megachurch.

“One of [Christ Fellowship’s] campuses is in an old mall and two others are in buildings that used to be Targets,” third-year Erika Thompson said in an email interview. “They’re HUGE.”

Thompson went to the church’s teen activities with her friends a couple of times during high school. The Teen Center is a “huge warehouse looking room with pool tables, air hockey, ping pong, tvs and tons of other games,” Thompson described. “You get to play and get free food for one hour and the next hour is basically a Christian rock concert.”

One of the defining characteristics of megachurches is their immense size, necessary to fit thousands of people. Thompson described their main worship room as a “giant auditorium with at least four different entrances.” Inside, there is a book store and multiple food and coffee kiosks.

“Their child care center area is a mock ‘Kids Town’ with fake brick roads, mini houses that are different classrooms, fake ‘shops’ and an indoor playground,” Thompson said. “During their New Year’s Eve service it ‘snows’ in Kids Town and they legit have snow falling from the sky and they serve you homemade donuts and cider.”

In a response to an online survey sent out to the Forum for this article, a responder mentioned that they used to attend Christ Fellowship.

“They had several campuses with several thousand people attending each and had services almost every day of the week. Part of me liked it after being at a small church where I didn’t really feel like I was spiritually growing. This huge church network made me feel like it was easier to find people my age and there were more opportunities for me to volunteer or get involved. But it very quickly wore down on me and the size made it easy for me to get lost there. I stopped going pretty soon after that.”

Fifty-two percent of the 33 respondents had attended a megachurch at least once. When asked what they knew about megachurches and what their opinion was many students mentioned how they perceived wealth, commodification and commercialization of religion and the fundraising policies at megachurches.

One survey responder wrote that they had attended an Easter service at a megachurch one year and initially enjoyed it.

“At first I thought it was kind of cool–I’m Catholic and the one I went to was non-denominational so it was essentially like a giant concert on stage– but then I started seeing all the ways that they were trying to manipulate people into giving them money,” the respondent said. “And it seemed like a horrible thing to do–have a giant stadium with concession stands and everything for a church and then guilt people into giving you money to maintain that. I didn’t see any charity involved.”

Another student added, “I feel like they’re more for money than any genuine religious conviction.”

Other responses mentioned the conflicting feelings the size can create.

“I’ve only attended for big holiday services like Easter,” one survey responder wrote. “I find it very strange, you feel connected to everyone but also completely disconnected at the same time. It’s not exactly something I like.”