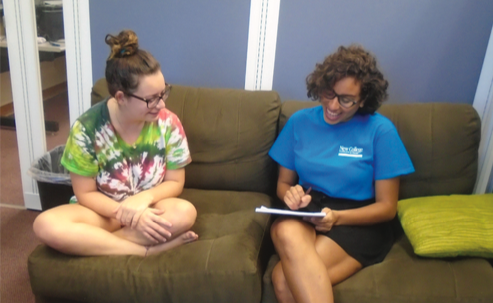 For most students, graduation marks the end of their time at New College, but for some, their time as students is only the beginning. While there is usually a learning curve when beginning new employment, the transition to their new jobs comes naturally to graduates who have lived through and been affected by the administrative processes they are now a part of. Hiring alums is also crucial for New College’s success in that it boosts New College’s performance metrics while also enabling students to continue participating in the community.

“Our students question everything. They’re in that habit of questioning themselves about what was right and what wasn’t right…and if you think about what a NCF student does academically, they learn to question the status quo,” said New College President Donal O’Shea. “Just being New College students, they’re just way more likely to think, ‘well it doesn’t have to be that way,’ and then they know the place, so it’s really a double whammy.”

Alum employees draw on their unique experiences as New College students as inspiration for their continued involvement in the NCF community in administration. While there is usually a learning curve when beginning new employment, the transition to their new jobs comes naturally to graduates who have lived through and been affected by the administrative processes they are now a part of.

“I work in the Registrar, so I get a lot of questions from students and sometimes parents about the academic structure at New College, which obviously is very different than a traditional academic structure,” Joy Feagan ‘12 said. “So because I have been through it all, I usually have an answer to the questions, I may even have an answer that’s better than what might be in the handbook or general catalog.”

In addition to academics, alum employees bring with them a profound understanding of the school’s unique sense of culture and legacy. Destinee Aponte was first a three-time RA who has worked with a variety of other RAs and Housing staff before being hired to continue her work with the community as an RHD immediately after her graduation.

“She knows our students, she knows the culture, she’s seen some people who have been with Res Life, and she’s seen what’s worked and what hasn’t worked,” O’Shea said about Aponte. “So she’s coming in with quite the store of knowledge.”

When asked about her transition to her new role as an RHD, Aponte was quick to describe the process as natural and easy, due to her experiences as a student and mentor on campus.

“When you have someone that has been through this as a student, it’s kind of just, second nature for them to go about the processes, like New College Student Alliance (NCSA) and funding is such a bizarre concept,but I know how it works, because I’ve been through it.”

Another benefit of hiring alums is that the new hires actually contribute to New College’s performance metrics. Performance metrics for colleges and universities are determined by the Florida State University system and are currently the standard by which the System judges a school’s performance.

“If you hire an alum that is freshly out, that counts as a recent hire,” O’Shea said. “If it’s a very recent alum, it helps with the statistics of those employed within a month of graduation, it sure doesn’t hurt.”

Immediate employment at the school also carries benefits for recent graduates, who are able to continue participating in the campus community, albeit in a different capacity.

“There’s a personal advantage to me, because I was able to get a job right after graduation at a place I was already comfortable,” said Feagan.

Although their time as students at New College is over, the graduates take particular pride in the new ways in which they can contribute to the school and make improvements for current students following in their footsteps. Special Projects Assistant Corey Culbertson works with Student Affairs and now works with staff, faculty and administrators to help create a more connected campus.

“I definitely want to try to improve,” Culbertson said. “I think about the student body as, like, my students now. I just want to help them and improve their experience here as much as I can.”