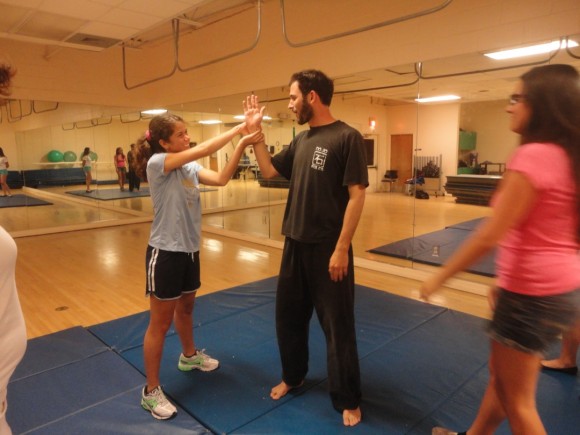 Marquez (left) tests a defense move with Wilco, who is trained in the martial arts style goju, meaning “hard and soft.”

Following recent reports of the Bay Shore predator and other criminal activities on and around the New College campus, many students have become tense. Partly in response to the resulting atmosphere of caution, alum Mark Wilco (’07) offered a free self-defense class at the Fitness Center on Mar. 3.

“I’ve been teaching a course at least twice a year, every year, [starting] in my very first year in 2007,” Wilco said. “I don’t really have a scheduled time, but about two weeks ago, I remember there was a conversation on the [student] Forum about self-defense.”

First-year Melissa Marquez was one of a handful of students to attend the class. “With the things that have been going on in Bay Shore and around campus, even on campus, it’s been making me a little bit on edge and I just want to make sure that I actually survive school while I’m here,” Marquez said.

Wilco, who has been practicing martial arts for nearly 18 years, said that students can contact him for a free self-defense lesson at any time. At his recent class, he gave the students general safety advice and then showed them practical ways to get out of potentially threatening situations.

“One of the things I really like to stress when it comes to generally being safe is the notion of awareness,” Wilco said. “It’s something that you don’t need a partner to train with. Walking to class, you can keep your eyes open, watching the corners of your vision and really trying to listen as best you can to everything around you. Really take notice of your shadows, really take notice of movement.”

Wilco also advised traveling in groups of three or more whenever possible. “Two isn’t necessarily the key number,” Wilco said. “It’s better than one, but three is better than two, because while one person is talking and one person is listening, one person is instinctively zoning out [of the conversation] and looking around them.”

For most of the class, Wilco showed the students effective defenses for getting away from an attacker, including ways to escape when grabbed from either the front or from behind and even how to get out of a choke hold. For all the moves he taught, the disparity in size and strength between an attacker and a victim do not matter, as the defense moves require surprisingly little force in most cases. Before any defense, Wilco said first to do an “attitude adjustment,” something to change the predator-prey relationship into a predator-predator scenario. A bark, a burst of opera or an inappropriately-timed polite comment can startle attackers into lowering their defenses, sometimes enough to avoid confrontation altogether.

“Be weird,” Wilco said. “Challenge [the opponent’s] cultural norms for a second — and that’s the second that you strike.”

He also went over the four main groups of offensive hits: stop power, which when used on an opponent has the effect the name suggests; hit power; high nerve endings and pressure points. Stop power hits include hits to the head and along the spinal column, which can cause serious damage to an opponent. Hit power moves are applied basically everywhere else and are intended not to floor opponents, but to hold them off. High nerve endings are areas where the skin meets bone, such as the collarbone, knees and sternum — all good areas to hit with everyday objects such as heavy cell phones or books, according to Wilco. As for pressure points, Wilco said, “If it’s squishy, stick a finger in it.” Pressure points include the temples, the insides of the elbows and the back of the knees.

Students brought with them objects they were likely to have at all times and Wilco demonstrated how such objects could be used for self-defense. Keys, he said, can be dragged across opponents’ knuckles and sneakers can be dragged across their shins to scrape off their skin. The strap of a purse can be used to choke somebody. A jacket can be thrown in the face of an opponent to give one time to escape. A lit cigarette can be put out in a predator’s eyes.

As far as pepper spray and Tasers go, Wilco said it is best not to use these objects unless one practices with them extensively, as one would do with a firearm. Pepper spray, he explained, can ricochet off surfaces and into the user’s face just as Tasers may cause more damage to the user than to the opponent.

Wilco said one of the most important things one can do to be prepared is to picture different scenarios of being attacked and think about ways to respond. “It’s not a sick thing to think about these things in advance,” he said. “Considering all of these options is not only …  something that’s going to help you prepare … but it’s also something that when the situation does arise, it’s  not a new thing to your brain, it’s not a shock to the system [but] a test that your computer has run many times.”