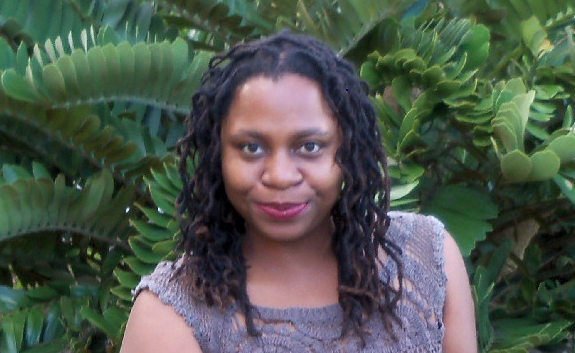 One of Wright’s favorite urban fantasy writers is Kim Harrison

Kenya Wright (’03) first came to New College with the person who is now her husband and met a counterculture group of free-spirited students. “We’re both African-American, are Navy veterans and were kind of conservative,” Wright said. “Basically, New College changed our lives. I’m completely different. Our families think we are hippies now.”

Though Wright used to only write poetry at New College, she has since branched out into urban fantasy with her new novel Fire Baptized. “I never thought I would write a book,” Wright said. “But now I’m pretty much addicted to writing them.

“I’m a fan of stories like Twilight, even though a lot of people hate them, and Vampire Diaries and True Blood,” Wright continued. “So I’m always just a fantasy geek. I just love urban fantasy because of how the city is its own character that breathes life into the book and adds to the whole story.” The novel is set in Miami, where Wright currently lives, and is based on the Santería religion.

“I really like civil justice,” Wright said. “I’ve always been into things that dealt with racism and gender discrimination. The novel is all fantasy – however, there is a group called ‘Mixbreeds,’ who are considered second-class citizens [and] live within a segregated society. That’s where a lot of my love for the topic of discrimination went into the book.”

Instead of going through the traditional publishing process filled with book agents and large companies, Wright decided to publish the novel herself. “I kept thinking that this process [was] going to take so long,” Wright said. “I found a book cover designer, two editors and a proofreader. My husband and my sister-in-law realized what I was doing and we decided to make a publishing company. We wanted to put out some quality fantasy for a reasonable price and stick it to the man.” Wright’s book is the first to be published at her company, Dragonfairy Press, and another novel by a different author will come out in May. Fire Baptized will be released on Feb. 20.

Her website biography states, “Kenya Wright always knew she would be famous since the ripe old age of six when she sang the Michael Jackson song ‘Thriller’ in her bathroom mirror. She has tried her hand at many things from enlisting in the Navy for six years as a Persian-Farsi linguist to being a nude model at an art university.”

In addition to trying her hand at novels, Wright is in her last year at University of Miami law school. She works as an equal employment opportunity specialist and raises her three children. “I’m always multitasking,” Wright explained. “My first child was actually born during my first year at New College. I walked around campus and went to Walls pregnant. It was fun, but since then I always multitask. I basically always write while I’m doing two other things.”

Wright suggests that students interested in publishing their work should join critique groups. “Let people who read your genre read your stuff and listen to what they say,” she said. “Maybe you don’t want to change everything, but try it out. I found a lot of people like to defend why they wrote something, but it ends up just being bad. If you don’t like it then take it away, but listen.”

Anyone interested in publishing their work can contact Dragonfairy Press and put in the subject line that it is a New College student submission. Some information courtesy of kenyawright.com.