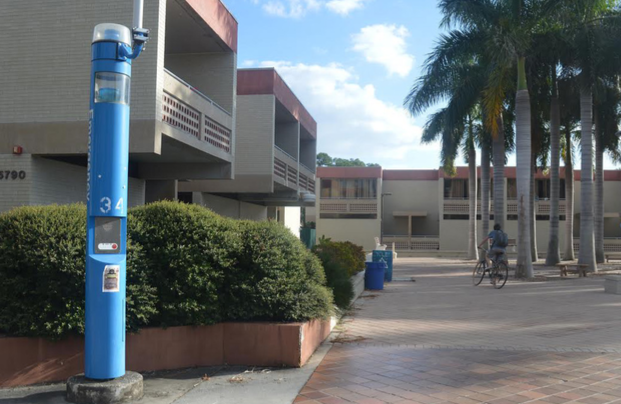 Over the summer, seven cameras were added to the residential side of campus totalling 101 cameras located on the campus. This, along with the recent mail theft and a trend of vandalism to student spaces, has led to a discussion on student safety and privacy at New College.

On Oct. 7, several members of InterACT found mail that had been stolen from students’ mailboxes, torn up and left on the floor of the Sexual Health and Relationship Education (SHARE) room. In the past, the SHARE room has been the source of multiple acts of vandalism.

“Two years ago, we had a serious incident of vandalization,” thesis student and SHARE Program Director Shelby Statham said. “Someone got paint all over the chalk wall and carpet, threw around fliers and ripped open menstrual products that were to be donated to SPARCC [Safe Place and Rape Crisis Center]. At one point last year, we had the poster incident that included materials from SHARE. Another incident included someone writing a rape joke on the chalk wall. There’s just been a decrease in respect for the room. InterACT members have been finding more and more trash in SHARE, in addition to people just messing shit up in general. We work really hard to keep the space stocked and tidy, it’s really heartbreaking to see people disrespect such a safe place.”

After the incident, many are wondering what actions should be taken to ensure that this does not happen again.

“I don’t know what we can do, honestly. I don’t think putting a door back is a feasible solution,” Statham said. “I’ve been very adamant about cameras not being able to see inside of SHARE and plan to stick to that.”

“I believe the NCPD [New College Police Department] handled this situation horribly,” Statham said. “The way they treated the students initially reporting the situation was unacceptable. Chief Kessie said the case will be handled ‘within the confines of their schedule,’ which continues to show their disregard for the severity of this situation. Although he’s been cc’d on communication about this situation, O’Shea has yet to respond about the potential felonies that took place on our campus. There’s a lot more to be done in gaining administrations full support of situations like these.

According to a recommendation by Florida Attorney-General Pam Bondi, the NCPD can not give exact information on the location of cameras on campus. However, Officer Kessie was able to vouch for the location of cameras on parking lots on the academic side of campus, including the Dort promenade from Bayshore to the bayfront. Cameras are located in view of the parking lot to Heiser but are not located on either Cook or College Hall, as well as the Sudakoff parking lot.

“It’s not too hard to see them if you really go out and look,” Kessie said. “Most of them are attached to the blue phones.”

Attaching security cameras to the blue phones are also a cheaper alternative to the school than placing them alongside some of the older buildings that have been on campus for years.

According to Kessie, the only cameras located on the residential side of campus are on the overpass, two cameras in the pool area, there are cameras in Hamilton “Ham” Center which, according to Kessie, were all funded by the New College Student Alliance (NCSA). One other camera was purchased by Metz.

However, according to Statham, who also served as NCSA co-president for the 2014-2015 term, the NCSA only paid for two of the cameras in Ham, the ones located by students’ mailboxes. These security cameras have clear sight into the NCSA office and another has some view of the Sexual Health and Relation Education (SHARE) room.

“There was a conversation with Physical Plant about a grant, they got to install cameras in the fall,” Statham said. “But they wanted to install them for security around the [professional] staff apartments, which we said not to because it invades student privacy.”

Kessie maintains that the cameras exist not to infringe on student privacy but to ensure student safety.

“We had a concern about people sneaking into the pool overnight,” Kessie said. “Obviously, it was a tragedy waiting to happen if alcohol or drugs are mixed in.”

“We do not use any cameras in a residential area,” Kessie confirmed. “We have nothing inside the dorm areas or around the dorm areas. […] I don’t think it’s uncommon on a college campus to have cameras on the residential area […] but we don’t have them here. The problem that comes up is, when we have a crime, it happens here and people say ‘Well, check the cameras,’ but there are no cameras.”

As of right now, the culprit for the mail theft has yet to be found by the NCPD.

“Ultimately, the onus will fall on the student body, especially if this was a student,” second-year and InterACT member, Emily Via said. “We need to respect community spaces, and we need administration to take these acts seriously and be proactive in preventing them through more education and emphasis on community respect.”