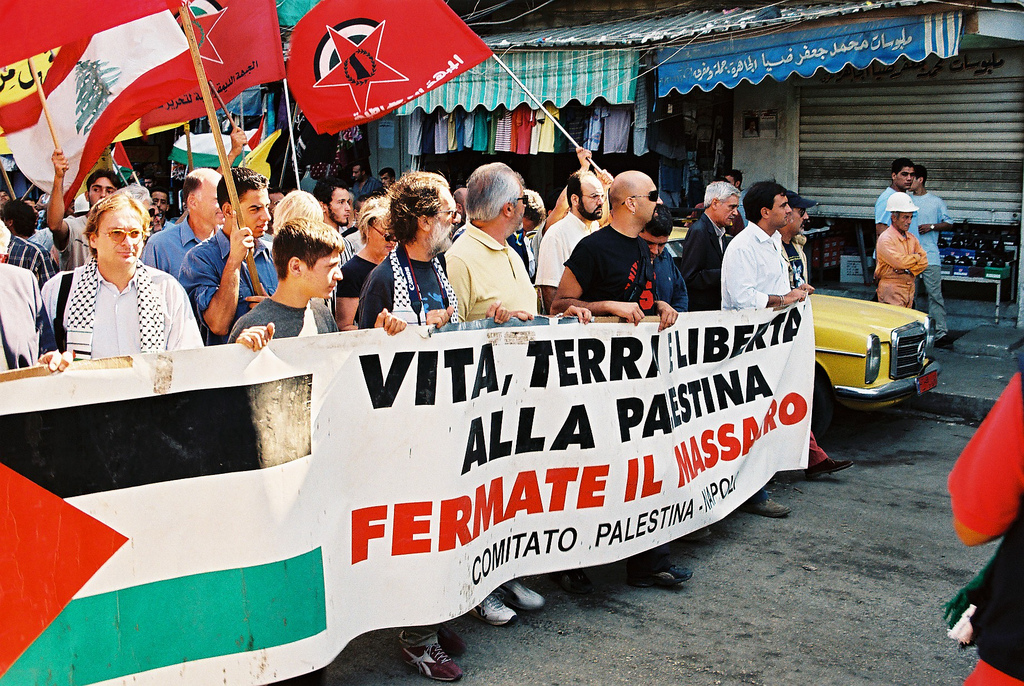 From a 2003 protest in Beruit this banner reads "Life, Land and Liberty to Palestine. Stop the massacre."

On Nov. 12, an Israeli missile struck the home of Baha Abu al-Ata, a commander in the political faction known as Palestinian Islamic Jihad (PIJ). Abu al-Ata and his wife were assassinated, leading to PIJ to retaliate with locally-made rockets against Israel with a result of no casualties. Israeli forces carried out waves of airstrikes in response, which killed 34 Palestinians. The Israel Defense Forces (IDF) claims 25 of the Palestinian deaths were militants and the rest were civilians. A ceasefire, facilitated by Egyptian and United Nation officials, was brokered on Nov. 14 in Gaza.

A PIJ spokesman Musab al-Buraim explained that Palestine agreed to a ceasefire sponsored by Egypt after Israel was forced to accept the conditions set by the Palestinian resistance. The conditions included a ban on assassination operations and the use of fire against protestors near the Gaza border fence. Ultimately, the conditions have the goal to permit action to terminate the blockade of Gaza. Israeli officials have yet to publicly confirm the ceasefire but privately agreed to the terms.

“[Israeli forces] usually bomb mosques or empty lots from underground,” Aita said. “Sometimes it happens so that a family lives next to an empty lot and they die as collateral damage. Yes, some of the people who were killed worked for Jihad or other resistant movements, but those other civilians [who were killed] had nothing to do with the resistance movement.”

Aita explained that in the Gaza strip approximately 20 percent of the population works for different resistant movements. These movements have many names like militant groups or political factions but the distinction between the ideologies is how each group believes they should deal with occupation.

“The rest [of the people in Gaza] are just normal people like my family,” Aita said. “They just want to go to school and work. For the past two days school and work were canceled and my family stayed at home. Yesterday my sister sent me a photo of a house that was bombed right next to them. I was obviously worried all day long, I was just in a haze walking around campus.”

Aita added that Israeli airstrikes and Egyptian mediation happen regularly, but “this is the worst it has been [in] four months.”

Aita also shared her view on the disparity of the defense forces between Israel and Palestine.

“The rockets [in Palestine] are locally made,” Aita said. “They’re like home-made rockets. We do not have an army because we are not a country, we are considered territories.  Before [the conflict] was stones versus guns, it wasn’t bombs versus home-made rockets.”

Hamas, the fundamentalist militant organization that the United States, European Union and Israel consider a terrorist organization, received an electoral victory in 2006. Clashes with their rival political faction led to Hamas becoming the de facto governing power of Gaza in 2007. In 2008, Israeli forces attacked Gaza, targeting Hamas, and more than a thousand people were killed. Israel also led another military operation in 2012 and 2014.

“There hasn’t been a major operation [since] 2014 when about 3000 people were killed, but everyone is scared about a fourth military operation,” Aita said. “These ‘one night’ bombings scare us because sometimes if they get intense they can drag on to become a war, but this time people were worried that it was going to turn into a full blown operation.”

Aita expressed that it’s difficult to explain the conflict between Palestine and Israel on a surface level, which most Western media does. The lives of the people who have to live this reality gets lost in translation.

“You can not understand what is happening if there is no personal perspective or else it’s just this monstrous issue that has been going on for a 100 years because the Middle East is ‘complicated,’” Aita said.

Information from this article was gathered from the BBC.