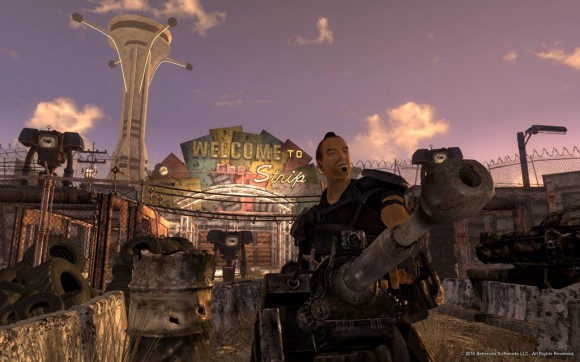 Fallout: New Vegas was released last week, culminating a two year period of intense anticipation by longtime fans of the franchise. It was two years ago that wildly successful game developer Bethesda Softworks released Fallout 3, a very popular and well-reviewed installment that bore as much of a resemblance to their hit The Elder Scrolls IV: Oblivion as to Black Isle Studios’ historic breakthrough in role-playing game design, Fallout 2.

Soon after the release of Fallout 3, Obsidian Entertainment began development of New Vegas with the help of the Havok game engine and the Garden of Eden Creation Kit (GECK) game modifying interface that Bethesda provided free to purchasers of Fallout 3. Essentially a grand “mod” for Fallout 3, New Vegas features largely the same graphics, user interface, controls, setting and style. What this allowed Obsidian to do was devote nearly all of their development resources to writing, that task so oft undervalued by currently competitive game designers.

While this may seem to make New Vegas unoriginal, such a view leaves a large part of the historical picture out. Obsidian employs most of the former staff of the company Black Isle Studios, developer of the original Fallout, Fallout 2, and a host of other critically and commercially successful games in the late 90’s. Gamers who’ve played these classics will quickly recognize the similarity Fallout’s newest incarnation bears to them, and may come to see New Vegas as the game Fallout 3 ought to have been.

Black Isle/Obsidian’s list of award-winning and trend-setting successes also includes Planescape: Torment, Knights of the Old Republic 2: The Sith Lords and Neverwinter Nights 2. Alpha Protocol, an espionage-action themed roleplaying game, has been their biggest flop of late. It currently holds an aggregated critical score of 72 at Metacritic.com.

Fallout: New Vegas has achieved an aggregated score of 87 based on 17 reviews, each weighted according to the prominence of the reviewing publication. This is likely to rise as more reviews are written, published and amalgamated.

Gamers unfamiliar with this series may have been wondering what all this blathering is about. The world of Fallout is one in which a third world war has reduced the United States to little more than a continent-spanning, radioactive desert. The inheritors of “prewar” society are those who’ve had their way of life preserved within protective underground “vaults” since the nuclear armageddon. Culture within these vaults is and has been notably authoritarian, patriarchal and reminiscent of the worst stereotypes of Cold War American culture.

Outside the vaults, many of the living humans are called “tribals” because they have very little left of any textual records or education tools, generally live off of patches of fertile land as pastoralists and horticulturalists and tend to be without almost any of what was considered modern technology. Other humans live lives more like our own today, among the ruins of the machinery and structures they once held mastery over. Nearly all of these people are regularly preyed upon by human “raiders” and “slavers,” which are exactly what they sound like.

To these groups, developers added a race of outcast humans called “ghouls” who have permanently disfigured by radiation (and simultaneously rendered immune to it), hulking green brutes transformed purposefully into “super mutants” by a diabolical intelligence who served as the first game’s overarching villain and a variety of kooky robots with chassis reminiscent of the covers of sci-fi dime novels and B-movies.

Where Fallout 3 generally sought to reintroduce this setting and these concepts to a new generation of gamers, Fallout: New Vegas picks up where Fallout 2 left off by continuing to complicate them. Concepts such as the development of an expansionist proto-state, the New California Republic, are developed further, and a slave army is introduced out of the hopelessly barren Midwest, fashioning itself after a sadistically violent and moralistic version of Roman culture.

In addition, New Vegas upholds the strong Fallout tradition of freely mingling dark humor, dark themes and absurd references to other media. Examples abound, but players will quickly come to expect thinly-veiled sarcasm from almost everyone they meet. They should expect issues as disturbing as prostitution, slavery and the place of a psychopath in a stateless society to be addressed. Finally, they should consider taking the Wild Wasteland trait at level 1, which adds more than 15 events referential to productions like Star Trek, Monty Python and The Princess Bride to the game’s already considerable total.

Because of these faithful improvements to the core concepts of the Fallout franchise, and because of the obvious sense in returning to the original creators who built that franchise over a decade ago when games could only be a fraction of what they can now, the Catalyst accompanies this narrative evaluation with a rating of “Strong Sat.”