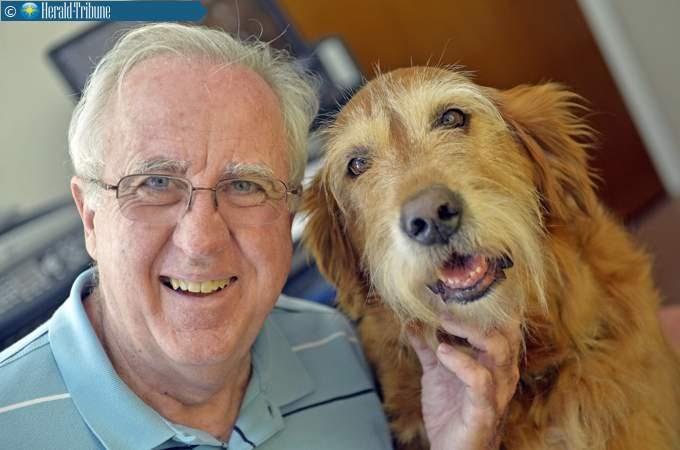 BY CHARLOTTE REDMAN AND CAITLYN RALPH

Known as the professor whose dog, Sam, accompanies him everywhere, Gordon Bauer is one of the beloved professors of psychology at New College. Bauer has worked at New College for 25 years, serving as professor, social sciences division chair and proficient researcher. This upcoming fall, Bauer will be spending his time on research leave before retiring from the college entirely.

In the corner of Bauer’s office, Sam comfortably sprawled himself under one of the skylights in the Bon Seigneur House, his second home. Easy companions, Bauer took a seat next to the dozing dog and spoke about his life – everything from his childhood until now, including what brought him to New College.

“When I was called and asked how I’d like the job, I still had to come down for an interview,” Bauer said. The acting senior professor of psychology at the time, whose house was adjacent to Bay Shore Road, offered him a place to stay.

Bauer arrived late one night and on his first morning in Sarasota he decided to go on a walk by the bayfront. “All of a sudden I heard ‘puff’ and thought, ‘Oh! That sounds like a dolphin,’ and then I heard it again,’” Bauer said. “I looked out into the water and my very first contact, on my very first walk to get out and see what’s around here, was a dolphin. I just thought to myself, ‘You know, this sounds like the place for me.’”

Since 1991, Bauer has taught an assortment of courses at New College, including Biological Psychology, Animal Learning and Cognition, Animal Welfare and the Question of Animal Consciousness. However, no matter the variety, the majority has honed in on one subject in particular: animal behavior.

Bauer’s attraction to animals seems to have stemmed from his childhood, when he experienced early exposure during his mother-son outings to the Prospect Park Zoo. “I still remember the zoo, particularly the sea lions,” Bauer said. “New York was just wonderful, I mean it had the Bronx Zoo and the American Museum of Natural History, which was fantastic.”

Even when he moved to New Jersey he still visited the zoos and museums, but with age came mischief. “My mom was not real happy,” Bauer said, reflecting on the time that he spent with his friend, venturing out into the woods to collect turtles, snakes, frogs and other wildlife. “I’d come home with a nice snake and she’d say, ‘Get that slimy thing away from me!’ and I’d think rationally about this and say, ‘Well mom, just touch it! It’s not slimy, they’re dry!’ But that didn’t help.”

Based on his passion for animals, it is easy to guess how Bauer will spend his research leave before retiring. “I have a bunch of different projects at different stages,” Bauer said. One of his long-term projects has involved studying manatees at Sarasota’s Mote Marine Laboratory. Some more recent endeavors include working with a New College student on manatees’ abilities to detect and discriminate the salinity of water, in addition to studying sea turtle hearing at the Clearwater Aquarium.

After the fall semester, when Bauer officially goes into retirement, the avid researcher will polish off old articles and delve into his backlog of previous research – especially that which he conducted on humpback whales in Hawaii. He hopes to do this in a much more leisurely and less pressured manner, similar to his teaching style and philosophy.

“My ideal teaching format is sitting in a diner or a bar with a pencil or a napkin and saying here’s how an eye works, let me draw this out for you,” Bauer said. These days, however, he believes that approach may no longer be practical, that teaching has to radically change and that the methodology behind it will be very different in the future. “Conveying content of some kind used to be a major part of teaching, but now all that information is at your fingertips electronically.”

Prior to becoming a professor, Bauer worked in special education as a children’s counselor with an undergraduate degree from George Washington University (GWU) in 1967. Originally attending as an English major, Bauer switched to pre-med and then graduated with a degree in psychology, since that was the subject in which he had accumulated the most credits.

“When I finished college after those three years I promised myself I’d never go back again, with all that pressure and tension from exams and writing papers,” Bauer said. “I didn’t want any part of that.” Breaking his promise, he proceeded to receive his Masters of Art in behavior and learning problems only six years later – with a focus in education.

Bauer did not have a traditional post-graduate experience after receiving his Bachelor of Arts, to say the least. In fact, everything he did after graduation from college in 1967 contradicts what the State’s metrics wants today in regard to entering the work field immediately after college.

“When I went home I thought I’d be a musician, so I studied music for hours and hours a day – I went back to school for music and discovered there were too many good musicians to be a mediocre musician,” Bauer said. “Then for what, the next 8 years, I worked in various aspects of special education.”

After leaving a counseling position, Bauer joined the Peace Corps in 1973. He volunteered in San Salvador, El Salvador, where he worked with special education at La Escuela de Educación Especial. It was during his time in the Peace Corps that Bauer first became intrigued by the ability to professionally study animals and be paid for it.

“I was looking for change after I’d been in special education for eight or nine years and when I was in the Peace Corp I had two experiences that encouraged me to change,” Bauer said. One of these experiences was at the beach, where he observed a man writing in a notepad and decided to approach him. It turned out the man was an oceanographer who was contracted to study wave patterns to help El Salvador develop their tourism industry. “I asked him, ‘people pay you to come down, sit on the beach, and look at the waves?’ And he said yes,” Bauer said.

The other experience occurred when Bauer was in the Guatemalan jungle, at the archaeological site of Tikal. “There was a guy, again with a notepad, who was taking notes, and I asked him what he was doing,” Bauer said. “He pointed to these monkeys and said, ‘I’m studying their social structures.’” This response enlightened Bauer to the idea that people could be paid to study animals. “So, I decided that’s what I wanted to do. Now, my interest was more marine – I already knew how to scuba dive – although I do love jungles. But, that’s why I went back to school. I wanted to study dolphins.”

In 1977, Bauer joined the staff at Pennsylvania’s Bucknell University as a teaching assistant. This is where he would receive his Masters of Science in animal behavior. Fast forward nine years and Bauer relocated to Hawaii to complete research and earn his doctorate in comparative/physiological psychology at the University of Hawaii.

Relocating to Florida, Bauer started teaching at New College in 1991 and simultaneously until 1995, he also worked as a visiting research scientist at EPCOT’s Living Seas, traveling there weekly to study dolphin imitation.

Second-year Connie Miranda has worked with Bauer since her first year at New College. “He’s a wonderful, caring person, who always makes time to meet with you,” Miranda said. “He has always supported any projects I’ve set my mind on. I’m sad he’ll no longer be my advisor and if it was up to me he would have been for all four years at NCF. He not only always gave me the best advice, but also encouraged me to consider neurobiology as my AOC.”

Bauer is regarded as a highly esteemed member of the New College community, but little do students know about his own college experience. “If I had come to New College, I would have flunked out,” Bauer said. “I think one of the things that’s characterized in many New College students is that they’re very good at self-structuring their lives, they’re able to do their academic work without someone else having had to structure it for them.”

Bauer believes that students should be serious, but that they should not allow themselves to become too solemn. “I’d recommend for New College students to enjoy themselves, but don’t go on probation. There’s a line,” Bauer said.