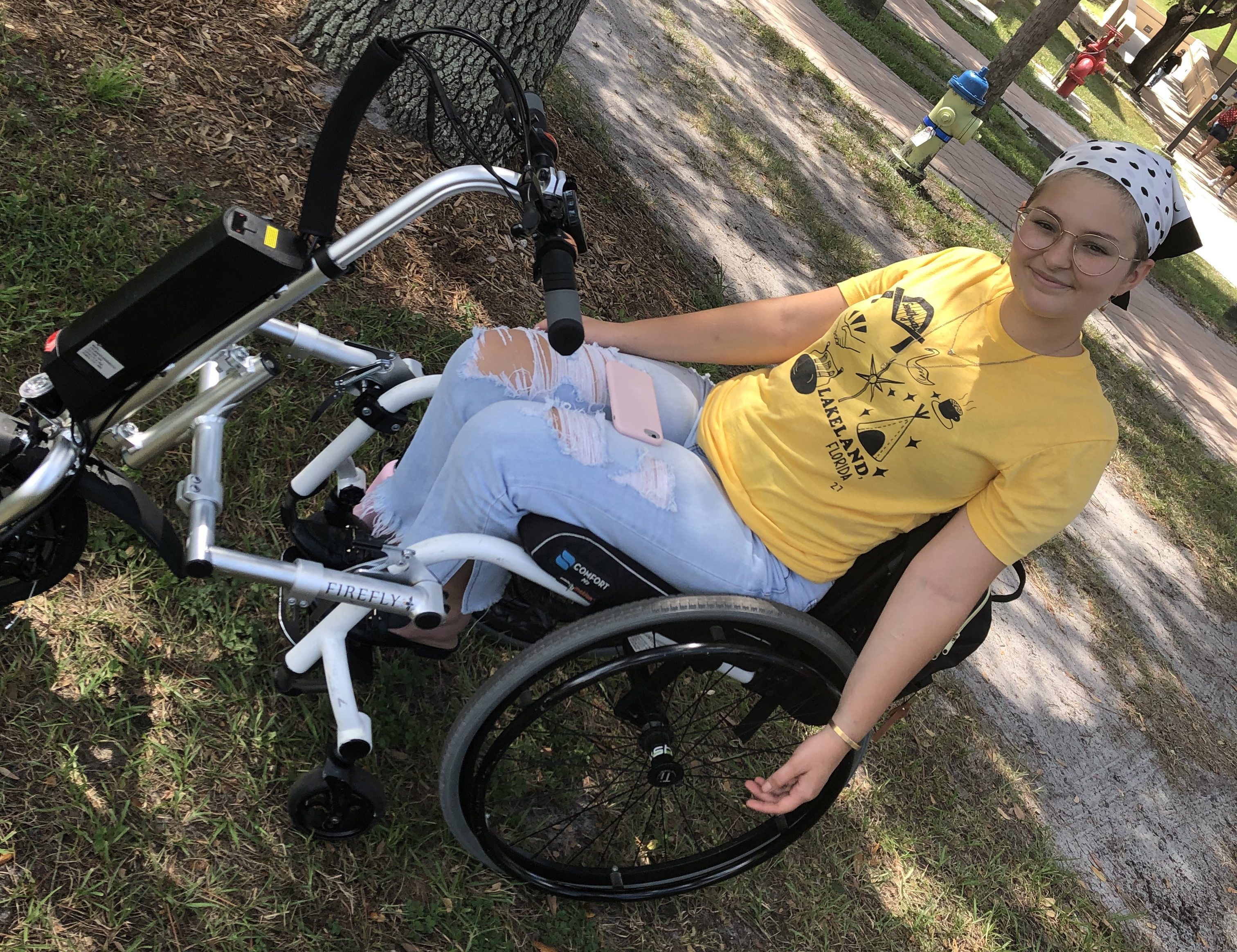 Photo courtesy of Erin Neishaus Shown by her shirt, first-year Anna Canady is proud to represent her hometown.

New College can be a place to call home for students who experience personal obstacles, whether mental illnesses, physical difficulties or a combination of both. Student Disability Services, (SDS), exists to not only recognize disability as an aspect of diversity, but to also educate students on what personal liberties they can be entitled to. Accommodations attempt to ensure that every student on campus is able to academically succeed. However, how accessible is the campus for students with physical disabilities? I investigated the day-to-day life of the first-year Anna Canady, a wheelchair user, and the obstacles she faces on campus.

Canady experiences a chronic pain condition called Complex Regional Pain Syndrome (CRPS) and suffers from another autoimmune disorder. The combination of these two syndromes makes walking especially difficult and she uses a special wheelchair to get around. She has spiffy attachment called a “firefly”, an additional electronically powered wheel, which makes it easier for her wheelchair to roll through multiple types of terrain.

In fact, Canady is probably the most adventurous person I have met at New College and often takes trips to the Caples Bayfront or entertains her bird-watching hobby with nature walks. Through casual conversation, Canady has briefly mentioned some of the struggles she experiences with her disability on campus. I wanted to investigate this further and be able to get as accurate an account as possible of Canady’s daily life.

At her suggestion, I experienced a quick ride in Canady’s wheelchair during the dinner rush hour through Hamilton “Ham” Center. I figured this would provide me with some sort of knowledge of the accessibility within the cafeteria hands-on. I sat in the chair and instantly felt completely dumbfounded on how I was supposed to move forward. She giggled as I finally managed to propel myself a pathetic two feet. Man, does it take a lot of upper body strength. I clumsily made my way between tables, bumping into chairs left and right.

My goal was to navigate myself out of the building using the non-automated wheelchair accessible door on the right-hand side of Ham. I had a long way to go and all of the empty chairs felt like barricades in my path. Her chair hooked onto some of the legs and as I moved, I carried Ham’s blue and green seats with me.

Finally, the exit. As I tried to escape, the door felt like pushing a boulder. Slinging myself forward was already consuming all of my strength; how was it possible to open the door at the same time? People rushed to help, but Canady shooed them away. When I finally got the door open, I could not move fast enough before it slammed shut again. The bar moved further and further away from my reach as the glass pushed the wheelchair backwards. Everybody was looking in my direction now. The embarrassment was so overwhelming that I gave up my strive. If this door had been automatic, I likely would have made it down the corresponding ramp with less trouble.

There is an even bigger concern, however, with the accessibility of the Academic Center (ACE). Canady takes two classes in this building and said that the exterior door she uses nor the entrances to her classes themselves are accessible for her.

“As far as getting into ACE, I have two options: I can either try to push the door open myself, or look pitiful until somebody nearby is kind enough to help me,” Canady said.

When it comes to the classrooms themselves, Canady says that one of her classes has a wheelchair push plate that does not work. For this class, she will always have a nearby classmate help her get inside, as the heavy fire doors are, as Canady said, “nearly impossible” to push open while in a wheelchair. It is especially difficult that these doors swing outwards, meaning that the door would ideally be propped open before she attempts to enter.

When Canady is successfully inside an ACE classroom, another issue is revealed. Canady explained that many wheelchair users will need to “transfer” from their wheelchair into a nearby chair.

“Transferring is basically being able to move yourself from your wheelchair to my seat without having to stand up,” Canady said.

Because the seats in these small classrooms tend to be rolling chairs, transfering is never an option. She usually will have to park her wheelchair nearby and walk to the nearest seat.

“If a person tries to transfer, the seat would roll away from them,” Canady said. “The spaces between chairs also do not make it possible to transfer the majority of the time. Luckily, I can stand up for short periods of time, but this isn’t always the case for all wheelchair users.”

While New College does have its obstacles for accessibility across campus, the Student Disability Services does not turn a blind eye to them. I spoke to the new Assistant Director of SDS, licensed clinical social worker Joseph Mayor. In an email interview, he told me about the goals of this service, and how being closely involved impacts him personally. Not only does Mayor discourage the self-shaming or embarrassment of one’s mental or physical disabilities, but he also wishes to provide struggling students with the accommodations they need to succeed academically.

I explicitly asked how Mayor thinks New College could improve on as far as disability accommodations. I wanted to keep this question open and also asked him to express what helpful accommodations SDS has successfully implemented thus far.

“I think that the first step is getting information to students on how to apply accommodations, so that they know what steps they need to take in terms of obtaining the necessary documentation and can do this in a more efficient and streamlined manner,” Mayor said “As far as getting around on campus, I think this could also best be addressed by students, bringing their concerns to me regarding areas where they see a need for improvement and showing me these areas on campus.”

I explained to Mayor how Canady has experienced issues with the doors in the ACE building and if SDS would consider making efforts toward making this area more accessible.

“I would like to know more about areas on campus that are in need of better accessibility. If [Canady] would like to point these out to me, I would like to hear about them so that these issues can be addressed.”

Mayor takes the issue of requested student accommodations very seriously. Throughout the interview, he repeated the notion that any student who feels impeded either physically or mentally by academic pressure should not be afraid to contact Student Disability Services. They will welcome any suggestions with open arms.

Canady considers herself very fortunate to be able to study and live independently at this college, despite her daily obstacles.

“These issues are important to talk about, because it’s possible that students can face similar problems that I have,” Canady said. “Other students in wheelchairs may not be able to stand whatsoever, and they’d likely experience bigger issues than I ever will at this college.”