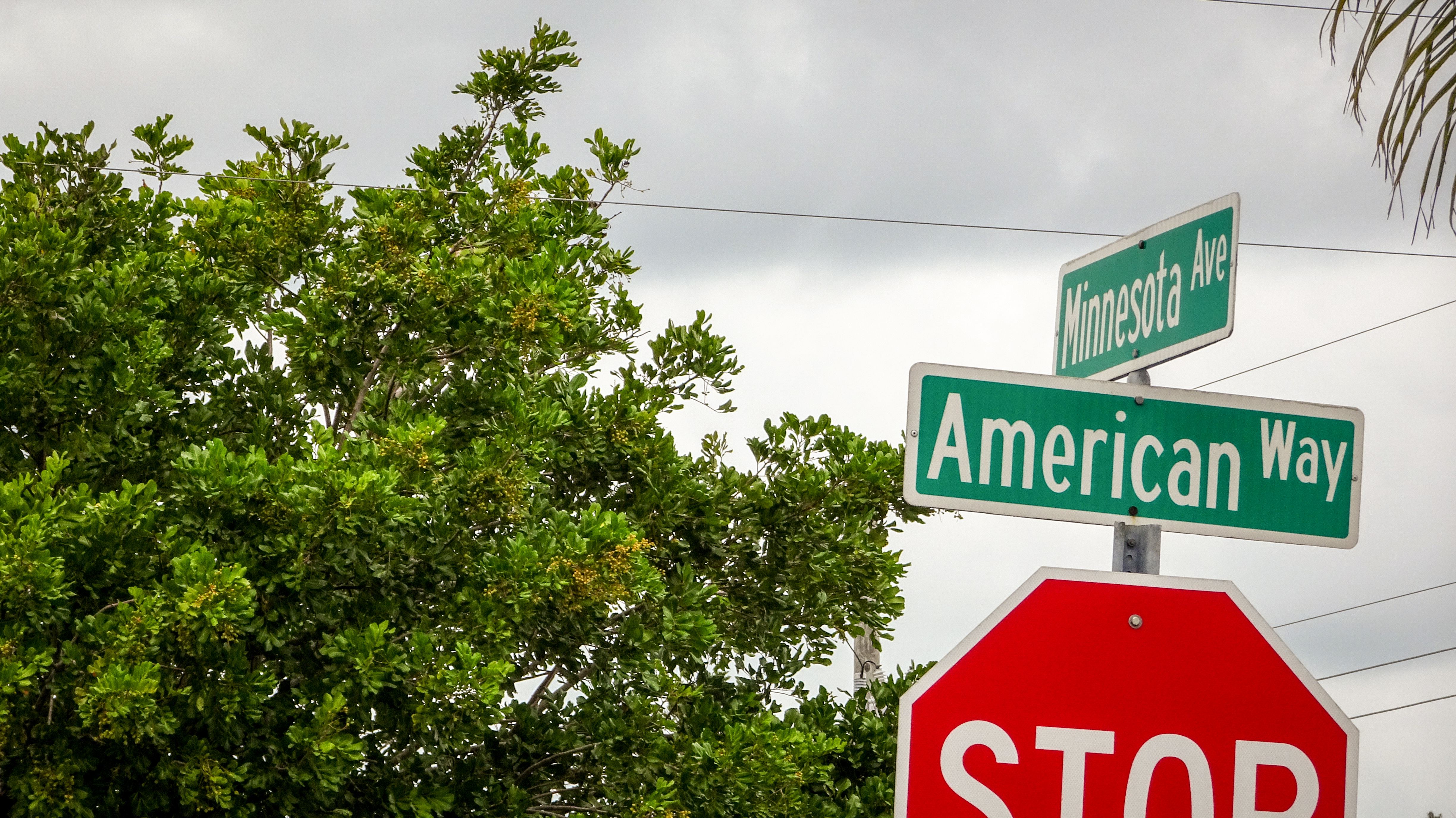 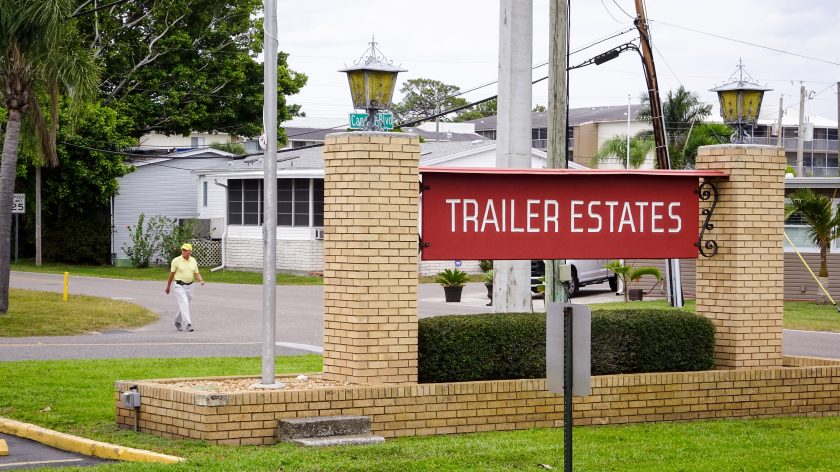 As a little girl, Sophia Kanzius often wondered what heaven would look like. She imagined a place that was warm all year, a place where no one had to work, with green trees and flowers that stayed in bloom. At 92 years old, Sophia Kanzius looked out of her window at Trailer Estates, and she saw the flowers blooming all year long, palms and sea grapes kept green by the Florida sun. That was in 1987, when Thomas G. Crouthamel, Sr. published A History of Trailer Estates, the most recent history of the park since it was founded in 1955. If he saw Trailer Estates today, Crouthamel might say what he said in 1987—“The more things change, the more they stay the same.”

I went to Trailer Estates unsure of what I would find. I had ridden my bike through the park many times on my way to work, but I never really thought much about what it was or the people who lived there. It was one of many trailer parks between Bradenton and Sarasota with signs posted that read “Deed Restricted, Adult Community 55 and Up.” I couldn’t help but feel a little left out, like there was an R-Rated movie showing and my mom wouldn’t take me to see it. As a young person living in South Florida, it’s easy to carry around a grudging disdain for the people who retire here. One of my old coworkers slapped a sticker with crosshair and “Snowbird hunting license” on his toolbox, and would point at it and smirk whenever we dealt with an especially demanding elderly customer. Trailer Estates didn’t seem like it fit in. Even the name, “Trailer Estates,” has a kind of good humor absent from the grandiose titles of neighborhoods like “The Woods at Sylvan Lea” or “Eagle Trace.” 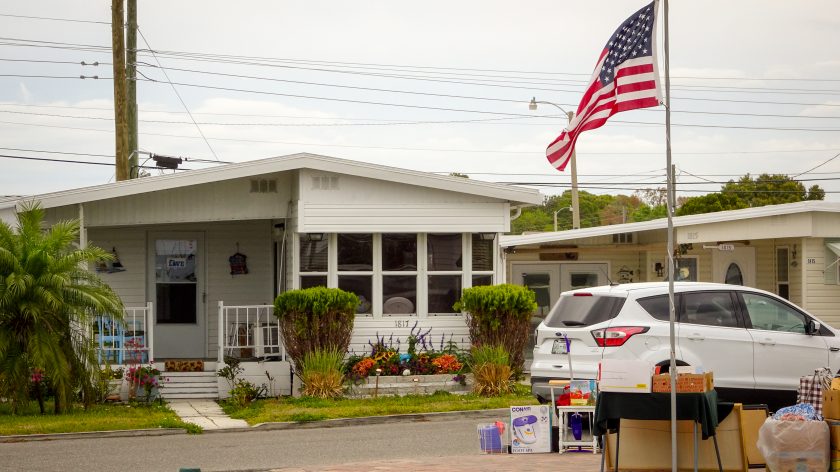 (all photos by Cole Zelznak/Tangent)

The American flag flies above a Trailer Estates garage sale.

Trailer Estates is arranged around a miniature town center made up of five buildings covered in coral-pink stucco. Outside, between the pool and the shuffleboard courts, I met Gary Leboeuf, who worked in the agricultural supply industry, and Harry Sarowan, a retired nuclear physicist.

“Some of us here are rich like Harry, and poor like Gary,” Leboeuf said. “Lotta blue collars here, I was a blue collar. All kinds of people live here.”

“At about eight at night, it’s quiet,” Sarowan said, one hand resting on the handlebars of his tricycle, the other holding his gold shuffleboard cue-stick.

“But the activity hall is busy every day and every night,” Leboeuf replied.

According to Leboeuf, Trailer Estates has been featured on CNN and in the Smithsonian Magazine, and has been named one of the best places to retire by numerous magazines. He pointed to the shuffleboard courts and told me that world championship games had happened there. He pointed to the pool and told me that the county people had come to test it and declared it one of the cleanest pools in Manatee County. 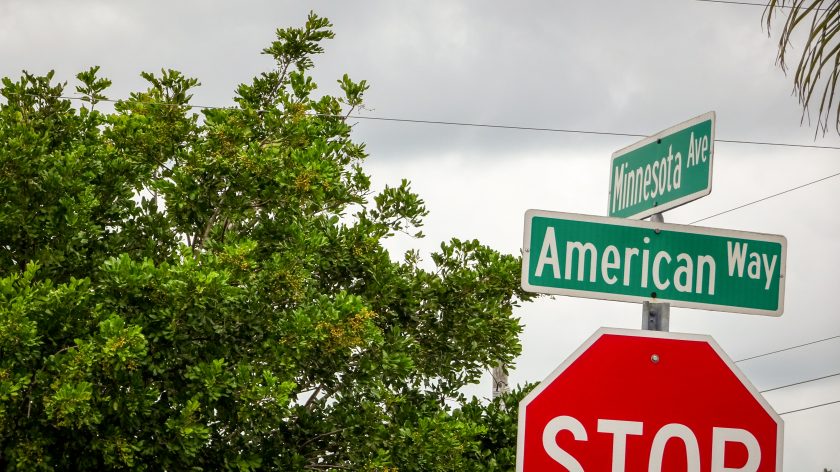 Trailer Estates has been featured on CNN and in the Smithsonian Magazine and has been named one of the best places to retire by numerous other magazines.

“If someone said to me ‘Here’s a million dollars, you gotta leave the park and never come back,’ I just wouldn’t do it,” Leboeuf said. “I wouldn’t.”

Trailer Estates, only three miles from New College, is undeniably unique. The place means something to the people who live in it, and they have a sense of responsibility for their community. That’s partly because the subdivision is its own self-governing Parks and Recreation District within Manatee County. Trailer Estates’ self-government was established in 1971 after the park residents bought out its amenities from a land management company. It has allowed the park to flourish as a community able to look after its own interests. A board of nine directors manages policy that concerns everything from bingo nights to where laundry can be hung out to dry. Almost 1300 households pay taxes to fund the independent district, and in 2017 the park had a budget of over $1.5 million. 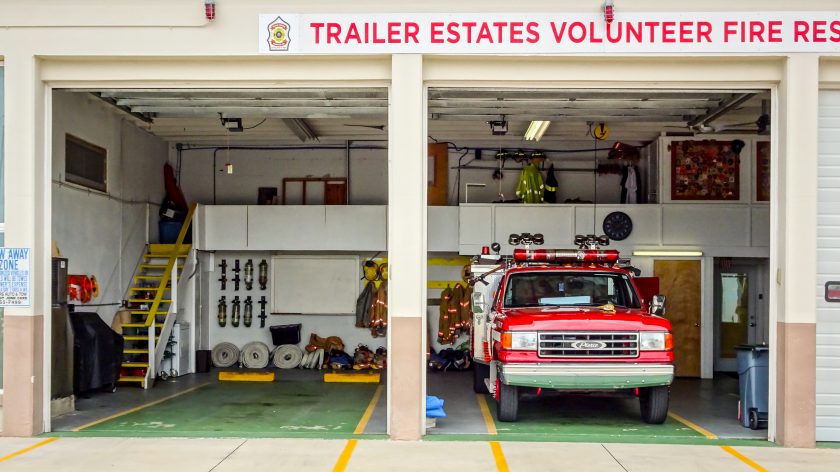 Trailer Estates is its own fire control district staffed by volunteer first responders aided by an auxiliary organized by the park’s residents.

Trailer Estates is in many ways like its own small town. The park occupies an area north of Bowlees Creek that is roughly 300 square miles. It has its own fire station, post office, two large recreation halls, gym, pool, woodshop, marina and a 32-lane shuffleboard court. Residents participate in a bewildering number of clubs dedicated to activities like line and country dancing, pickle ball, copper enameling, all types of card games, painting, Wii bowling, quilting and bocce. They even have their own big band group, established in 1960, known only as the Fun Band. The park is home to civic and charity groups that volunteer their time to help both residents and outsiders. This is only a small sampling of the park’s activities, and the one thing that everyone told me was that it’s very difficult to be bored in Trailer Estates, and residents are proud of that. 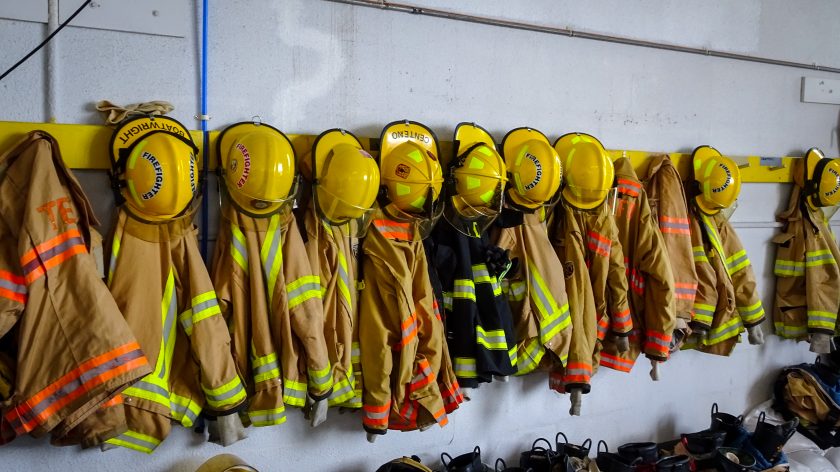 The Trailer Estates woodshop is full of lathes and bandsaws that can be heard from the parking lot. Inside, I shouted over the roar of the tools at the first person I saw, who pointed me over to a man at a lathe and told me that his name was Roland and that he was a master woodworker. Roland Hache, who is from New Brunswick, retired five years ago from a career as a mechanical engineer. His hands are coarse, and the tip of one of his fingers looks like it’s been lopped off and reattached. He showed me the shop’s new ventilation system, and how the knots on a segment of tree trunk can be ground down to create wood grain with unique vein patterns. Hache and another woodshop worker, Michael “Mike” Hinckley, proudly recounted how that year, the woodshop had made and donated over 750 toys to four different child welfare agencies and held an auction that raised over $5,000 for the training of service dogs.

While I was taking pictures, Daniel “Dan” Harrell stopped to ask me if I had gotten any good shots. I asked Harrell if I could speak with him about the park, and he said yes, on the condition that I walk with him so that he could get his 15,000 steps in for the day. Harrell and I walked to his trailer, where he introduced me to his wife, Evelyn “Ellie” Harrell. The Harrells moved from Michigan to Trailer Estates 30 years ago, and told me that there are so many Michiganians and Canadians in the park that one of the most popular events every year is a Michigan-Canada themed dinner.

I was curious if park residents made an effort to appreciate the history of the park and the homes there. I had noticed that many of the vintage trailers in the park, some over 50 years old, were so well-maintained that they looked like they were fresh out of the factory. Mr. Harrell told me that residents celebrate the anniversary of the park’s founding every 10 years, but that the immaculate condition of many of the older trailers was likely due to rules governing cleanliness, architecture and curb appeal. 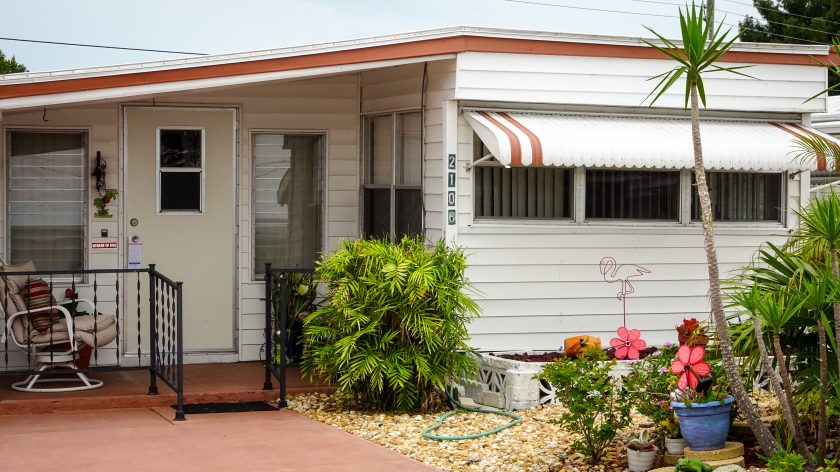 Many residents take pride in making their homes unique with additions like garden beds and porches.

The park and its story are representative of a unique moment in Florida’s past, when the land was emptier and Trailer Estates’ founder Sidney Adler could carve out an affordable neighborhood of manufactured homes right on the bayfront. Trailer Estates was one of the first Florida trailer parks planned with working class retirees in mind, and the first in the world to sell, rather than rent, trailer plots. The trailer home, built in a factory and transported by truck, is itself a product of World War II and the Cold War era. The popular domestic culture of Cold War America saw home ownership as a patriotic duty and the only way for a family to live a full life. Buying a “double-wide” and moving into a trailer park was a way for White Americans of limited means to participate in and fulfill the American dream. For Americans who could not afford the ideal suburban home, a trailer home was a rational compromise that brought with it the opportunity for wives to participate in domestic life and for husbands to fulfill patriarchal responsibilities.

Even though Trailer Estates has changed since its founding in 1955, the park still has a timeless feeling to it. The daily lives of its residents pass by. They walk, bike and ride in golf carts. They attend dances, watch birds and practice shuffleboard. But a stillness hangs over the sunbleached asphalt and the corrugated gables of the trailers.

“It is a bright and happy future that we face as residents of Trailer Estates, still ‘The Best Trailer Park in the World!,’” Thomas Crouthamel, Sr. wrote in 1987. Today, a page in the park’s directory bears a photo of Sarasota Bay and the words “Today, tomorrow and forever… Trailer Estates.” 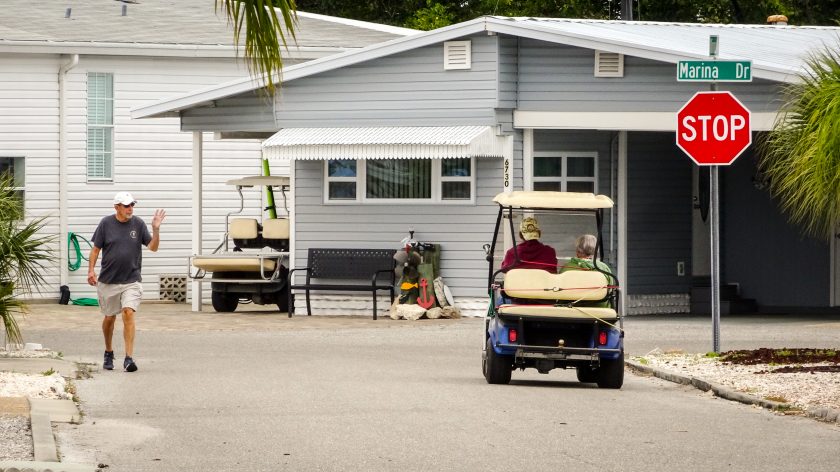