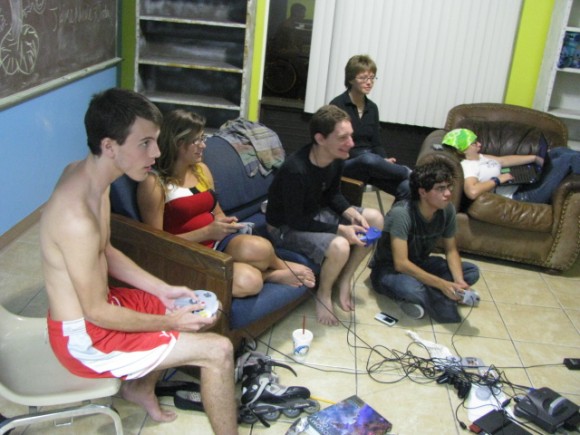 A walk through almost any dormitory lounge or common room on campus at 9:30 on a wednesday night will more likely be a stroll in a war-zone. The game of Super Smash Bros. allows students to beat the living daylights out of each-other. The video game pits a plethora of characters from the Nintendo franchise against one another in brutal combat.

“The cool thing about the Smash series in general is that everyone has played it at some point. There are a lot of people who just get brought in. So when there is a Smash game in a public space it is an opportunity for people to hangout and spend time with a common activity, Even among people who don’t play at all, everyone has played a Smash game at some point which means that if people see you playing Smash they are probably going to jump in.” second-year Justis Mills said.

There are three versions of the Super Smash Brothers video game. The original Nintendo 64 version was released in 1999, and the newer versions Melee and Brawl for Nintendo Game-Cube and Wii were released in 2001 and 2008 respectively. Mills is most competitive in the Brawl version. Mills says that he has been playing the Super Smash Brother series since he was 10 and the Wii version Brawl since it came out.

“There was a while when I was pretty sure I was the number two player in Tallahassee, by virtue of the fact that there where tournaments every two weeks and practice tournaments every week,” he said. “In the practice tournaments, the only player that routinely did not attend was the best player in Tallahassee. He won almost all of the main tournaments and I won almost every practice tournament,” Mills continued.  “I don’t mean to sound arrogant, but I have trained at this game. No-one else on this campus has trained at this game, and I mean literally speaking I have had it such that my entire crew would hang out together and do rotating matches where the winner stays. It was like my sport. For one summer we would play three or four times a week for hours specifically trying to get better at the game to a point where I’m just familiar with it in a way that nobody that hasn’t done that is.”

“Once in a four man match with items on I beat the best player in the world. I am not very good, I was even worse at the time. In competition MiIls goes by the gamer tag “Eight” or “8,” this is e his Super Smash Bros. nick name. Mills’ favorite character is Falco. “There is a lot of theory in Brawl,” he said ”Falco is a character who has a lot of options that are really good. Falco’s options are the most diverse and the most flashy. “

“Brawl is the only video game that I play seriously.”

“Really at brawl you only get better by playing people who are better then you.”

Mills explained the institution that oversees the world of Super Smash Bros. competition,an organization called the Smash Backroom.  This group determines what’s what in the Smash community. The Smash Back-room consists of the top tournament organizers and the top players for the most part. The Backroom is where they make decisions like the tier list and tournament rules, Mills said.

“Nobody at the New College community plays Super Smash Bros. very seriously, so my skills have atrophied a lot,” he lamented.

Mills has not gone entirely unchallenged this year in his video game of choice. Mills said that the worlds best Super Smash Brothers Melee player stayed with him in his apartment this past September. Jason Zimmerman, better known to the Super Smash Bros. community as “Mew2King” or “M2K” stayed with Mills while he attended a Super Smash Bros. tournament in Tallahassee. “He ended up staying here for a week because he had no idea where he was staying.” Mills explained the Smash communities views of Zimmerams Super Smash Bros. abilities. ”If you got a sufficiently powerful computer and you programed it to play smash it would play a lot like Jason but worse.”

“He calls himself a bounty hunter,” said Mills.”This is because he goes around the country bounty in the form of winning tournaments, and not just big tournaments,

He travels the globe alone winning Brawl tournaments and sleeping on the couch of whatever player will have him.”

As he spoke Mills remaind locked in a game of Super Smash Brothers Brawl, his character Falco kicked another player off into the abyss of space. “thats the good thing about Brawl,” he said consoling his opponent. “no matter how bad you are at it it’s always fun.”