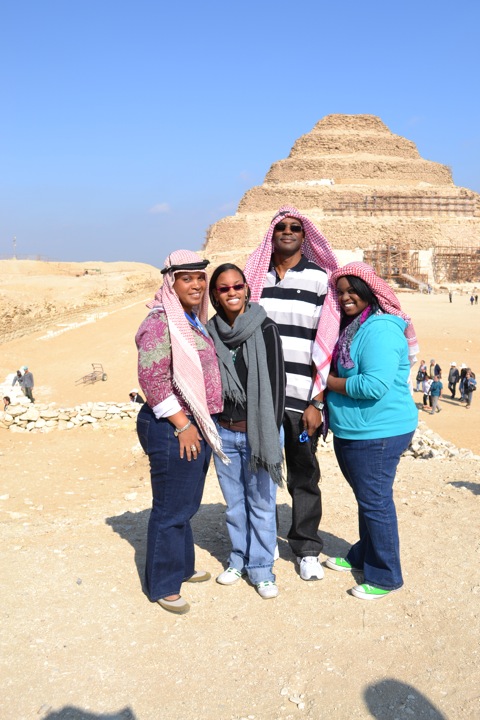 Destiny (far right) poses with her parents, Richard and Hillary, and sister, Kaylin, in front of a step pyramid. The earliest Egyptian pyramids were constructed from layers of stone, forming a step-like structure.

Third-year Destiny Lyals’ family considered several destinations for their trip this January. As a celebration of her parents’ 25th anniversary, the family contemplated visiting a number of exotic countries across the globe. Visiting Greece ranked high on the list, but the political unrest throughout the country kept the family at bay. They Lyals also considered visiting the Australian Outback. “We didn’t go to Australia because the only thing my mom wanted to see was Lyles Falls,” Destiny said. “Plus, it was flooded there.”

Instead, the family packed their bags and headed on a 12-hour flight to the land of the pharaohs. Destiny and her sister Kaylin would join their parents on a ten-day guided tour of Egypt, visiting the ancient tombs, the Great Sphinx and Valley of the Kings. As part of her Independent Study Project, Destiny chronicled the trip in an online journal, followed by a presentation when she returned.

The Lyals were unaware that the political strife that turned them away from Greece would follow them on this trip. Destiny hadn’t heard of any political problems stewing when she arrived in Cairo on Jan. 14.

“I didn’t know anything about any civil unrest prior to going to Egypt and there really weren’t any clues as to what was to come,” Destiny said. “We didn’t really look into the politics before leaving. It was more of looking into the tourist ‘dos and don’ts’.” 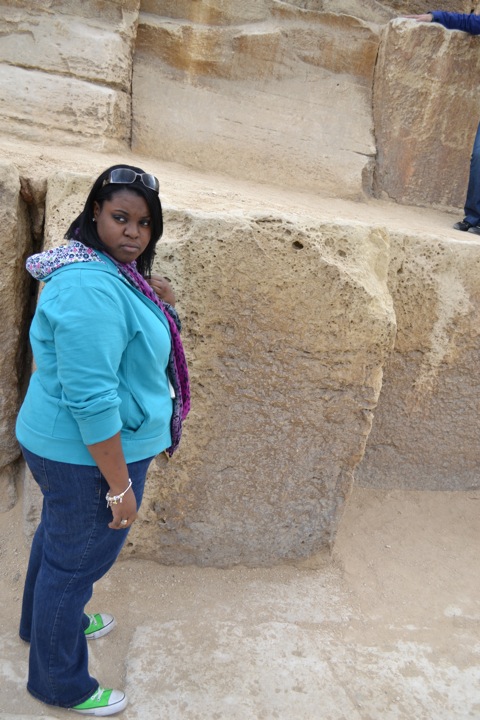 Destiny Lyals stands near one of the enormous blocks at the base of the Great Pyramid. Originally smooth limestone encased the blocks to give it a smooth surface, but only the blocks remain over 4,000 years later.

Even during their trip, there was little sign of the trouble brewing.

“I didn’t hear anything,” Destiny said in a presentation she gave on Feb. 3 to a small audience in the Anthropology Lab. “But then again, I don’t speak Arabic. They could have been talking about it, and I would never have known.”

With no signs to worry them, the Lyals enjoyed their cross-continental adventure, visiting tombs and temples throughout the country. Destiny saw many incredible sights, but one ranked above all others.

“My favorite thing was probably seeing the glyphs and colors in the tombs in the Valley of the Kings,” she said. “It was amazing to see such a variety of colors used in these tombs and knowing that they were made of only a few items and lasted for 3800 years made them even more amazing.” Historians cannot replicate the special paint, made of minerals, egg whites and a few other ingredients. Modern attempts fade after decades, whereas the paint in the tombs remain vibrant after millennia.

Destiny also visited the Egyptian Museum of Antiquities, where she admired the statue of Anubis, a jackal-headed god that represented the Egyptian afterlife. The statue was found in King Tutankhamun’s tomb. “It was my favorite one in the whole museum,” Destiny said. She was one of the final few to see the statue in one piece. Just days after the Lyals left the country, looters destroyed the statue while raiding the building.

“My mom and sister saw on the news and told me it was destroyed,” Lyals said. 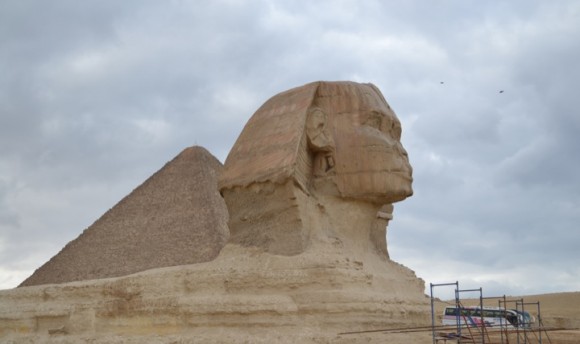 Just a quick jaunt over from the Great Pyramid of Giza, the Great Sphinx crouches on the sand. One of countless sphinx statues, this one is the largest in Egypt.

The Lyals left Egypt just days before protesters flooded the streets of Cairo. Just one day after they left the country, an estimated 20,000 Egyptians filled the streets, demonstrating against President Hosni Mubarak’s rule. On the first day of protests, clashes with police killed three protesters, and wounded dozens.

Many American travelers that stayed in Egypt after the protests began remained stranded in the country for days. Destiny thinks that if she and her family hadn’t left on Jan. 24, things could have easily taken a turn for the worse

“We would have probably had to go to the American embassy, which was a few miles down the street from our first hotel,” she explained. “We would’ve had to be escorted out of the country for our safety. My sister would have probably flipped out, because that’s what she does when things go wrong.”

Thankfully, they were out of Egypt before major airlines canceled flights and U.S. government charter flights evacuated thousands from the country.

“I definitely feel lucky that we got out before the chaos started,” Destiny said. “It was perfect timing on our part. While we were there everything seemed to be fine, but apparently looks can be deceiving”

President Mubarak stepped down on February 11. Crowds again filled the streets, chanting, “Egypt is free.” The Supreme Council of the Armed Forces will “run the affairs of the country” until another president takes office.

Though the country currently remains unsafe for travelers, Destiny recommends the destination for future travelers.

“It was definitely an experience,” she said. “I have to say, if you’re going to go somewhere only once, Egypt is a place to consider— after everything calms down, of course.”

For more information on Destiny’s travels, her blog, www.ncftraveler.blogspot.com, contains daily entries from her trip.