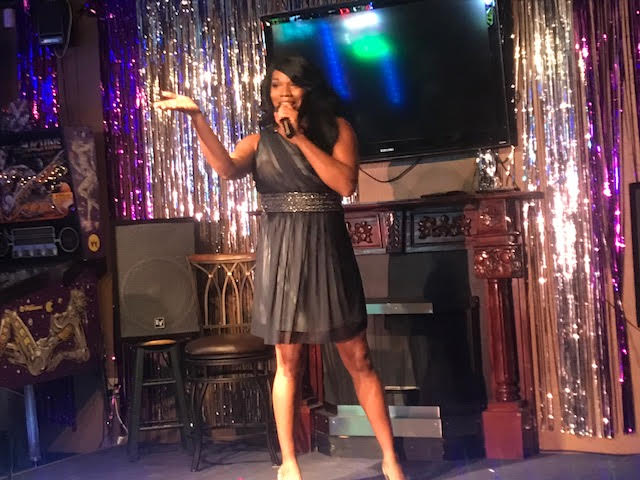 Her set list included: “Rock Steady” by Aretha Franklin, “I'm Not Perfect” by Missy Elliot featuring The Clark Sisters and “It's About Time for a Miracle” by Beverly Crawford.

“Five, six, seven, hit it.” Miss Lola Davenport appears from behind a curtain. “It’s About Time for a Miracle” by Beverly Crawford starts to play as Davenport struts with her hands on her hips and sass on her lips towards the crowd. She is one of few queens who sings live, her gospel-upbringing infuses her vocals, faith and attitude as a Black transgender woman in a cis-oriented society. A woman like her, so determined to fulfill her identity no matter the adversity that comes her way, is the embodiment of strength in today’s evolving society.

Lola Davenport is her stage name, but Holly Binns is what she goes by in everyday life. Binns grew up as the child of a pastor in a small town in Arkansas. She was raised singing in her father’s church, playing the organ and keyboard since she was 7 years old.

“Where I came from, we didn’t have a trans or gay community,” Binns said. “So anybody that I knew that was gay, we all came from the same class, like 2010 class. There was only like four or five of us throughout the whole town that was openly gay. I was the first.”

She left home at 17 and moved to California, where she openly performed for the first time in her life. She experienced a sense of community, going to trans picnics and performing at open mic nights in “places that you wouldn’t even think a trans woman would be at,” Binns said, referencing biker clubs.

“I felt so out of place, but the bible says, ‘when you have a gift, it’ll make room for you’,” Binns said. “When I opened my mouth and the song poured out of my mouth, they wanted me to sing again and again. After a while, it didn’t matter whether I was trans or not, because they loved me for me.”

Binns and I share a personal connection, as she met my brother last year and they have been dating ever since. We often congregate at my mother’s house in Sarasota, cooking up a storm, laughing and sharing stories.

Binns spoke about the process of her parents accepting her for who she is.

“My parents were not really accepting at first,” Binns said. ”But within the last few years, my mom even tells me I’m beautiful, she’ll commend me on my performance and asks me for makeup tips.”

Binns said that many of her trans friends do not have parents that are accepting of their identity and that can feel alienating. She said that it  is not an easy battle and it is not something you can force, but it takes time.

“Like I told you earlier sis, just let go and let God,” Binns said. “If it’s really meant for you, it’s gonna come back to you. My mama loves me, my dad loves me, and [he’s] a pastor. My pastor loves me for who I am.”

While she was living in California, she was trained as a peer-support counselor at an organization that provided support to LGBTQ+ individuals dealing with homelessness, abusive relationships, HIV or mental health issues. Initially she checked in as a patient, but the staff recognized that there was something different about her; she had leadership qualities that would be perfect for the role.

“It was fulfilling because I felt like I was giving back,” Binns said. “I was doing something that a lot of us gay or trans people don’t get when they’re out there in the streets. A lot of people will have resources, but if you’re not in that group or category, you won’t know the information.”

Binns taught a class called Diamond in the Rough at the center that helped teach transitioning women the mannerisms and etiquette of being a lady. In the future, Binns wants to open up her own peer-support counseling center or LGBTQ+ center to offer those resources for all kinds of people.

“If you have to pop hormone pills ‘til the sun comes up to get the results you looking for, bitch do it, do what you gotta do,” Binns smiled.

When she moved to Florida, she started performing in drag shows, but she does not call herself a drag queen.

“It’s not even drag, it’s just coming out and being myself,” Binns said. “I don’t consider this drag, I just consider this being a pretty woman doing shows, girl shit.”

Binns performed Saturday Nov. 16th at the Purple Rhino Lodge in Sarasota, a non-profit organization that provides a safe space for LGBTQ+ fellowship. During her performance of “It’s About Time for a Miracle”, she danced and clapped to her gospel roots.

“Some people might say, ‘Well, you’re gay and you’re trans, so why do you say that?’” Binns said.“Well, it’s not about being gay and trans, it’s about your personal relationship with your higher-power, whatever it may be.”

Binn’s faith is what guides her every move and makes her comfortable with her identity as a fabulous Black transgender woman.

“If anybody’s out there listening to me, if you are thinking of committing suicide or you are thinking that life isn’t worth it because of everything that’s going on, I promise you that you might be in the wrong area, you might have to find your tribe somewhere else, but I promise you, you will find people who love you for you,” Binns said.