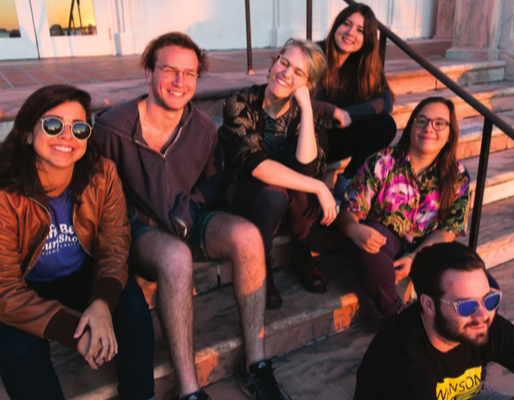 New Radio New College is the university’s “hidden secret,” according to third-year Rebecca “Becca” Caccavo. On any given Saturday night, between 11 p.m. and 1 a.m., students can tune in to 96.5 WSLR to hear the voices of their peers traveling over the radio waves from Downtown Sarasota. One can never be sure what music to expect and might even hear a pizza being ordered on-air for a late night snack at the station.

Alums Kay Saffe (‘12) and Zane Plattor (‘12), who both graduated this past May, did an Independent Study Project (ISP) together in their first year on the history of radio at New College.

In 2000, the New College Student Alliance (NCSA) applied for the license to the low power frequency 96.5. Three years later the NCSA negotiated a settlement agreement with David Beaton, who, at the time, was acting on behalf of the Gulf Coast Sanctuary. He is the current station manager at WSLR. They agreed that Gulf Coast Sanctuary would withdraw their application from the Federal Communications Commission (FCC), thus allowing the NCSA application to succeed, in exchange for the creation of a governing board that would consist of community members and student representatives from New College.

In 2009 the student body voted to transfer the station license to WSLR, Inc.. WSLR and New College agreed to a contract that allows the continuation of student representatives on the WSLR board and on the programming committee. The contract also stipulates that the station continue to offer and provide student internships and that the station remain in geographical proximity to New College. The FCC approved the license transfer in Feb. 2011. New Radio New College, a show on WSLR, first went on air in May 2013, created by Saffe and Plattor.

Caccavo has been involved in New Radio New College since her first year and is one of the main programmers. She credits her interest in radio and music to her dad who is an audio engineer.

“I like creating a playlist that waxes and wanes between different genres in a really cohesive way,” Caccavo said. “I like to do indie rock that goes into really awesome hip-hop that goes into…R&B.”

Being involved in New Radio New College has provided Caccavo an outlet to express herself. “It’s great to have a creative resource where I can just talk into the void,” she said.

Caccavo added that the radio has given her “a confidence in speech, in action and in art.” She sees the radio as a platform for new viewpoints and different ideas.

“Being able to have conversations from our particular college student point of view on the radio is really important, really needed, and really empowering,” Caccavo said. “These airwaves can reach people to get them to think about things that they otherwise would not think about it. They just would flip a switch and hear us talking about concepts that they did not otherwise know.”

Baslaw is a programmer for New Radio New College and is the NCSA Radio Representative. He tries to make sure his show is “good, chill ass music.”  He enjoys working at the radio station because it is a community-based, grassroots radio that is run by volunteers. Dave Beaton, the station manager, is the only employee on the payroll.

Second-year Paolo Baez-Perez, co-host of the Florida Caribe Show on WSLR, said it is clear at WSLR that everyone is there because they want to be there, and that that can be heard in their programs. “A certain quality disintegrates when people get paid,” Baslaw added.

Baslaw and Caccavo want to encourage students to get more involved at WSLR.

“The one bad feeling that I get about it [WSLR] is there’s not enough of [New College] in there,” Baslaw continued. “The reason why I can even say that is because WSLR wouldn’t be anything without New College…The radio has this little bit of New College just like Harry Potter has a little bit of Voldemort in him. But we need to get more of the Voldemort out there, I guess.”

Caccavo mentioned that more interest and participation by students means more time slots for New Radio New College. Caccavo would ideally like to have three different time slots a week. Before that happens both Baslaw and Caccavo would also like a different time slot than the one New Radio New College has now, since 11 p.m. to 1 a.m. doesn’t necessarily guarantee the most listeners.

“I feel like right now…WSLR affiliation with New College isn’t really too established and there isn’t much of a following but I just have this little intuition if there was a following then damn, will it ever be a following,” Baslaw said.

The best way to get involved with New Radio New College is to email Baslaw at noah.baslaw15@ncf.edu or Caccavo at rebecca.caccavo14@ncf.edu and to look out for Baslaw’s forum posts. Check out their Tumblr at newradionewcollege.tumblr.com and visit WSLR’s website to listen to live and archived shows!

Information for this article was gathered from wslr.org.