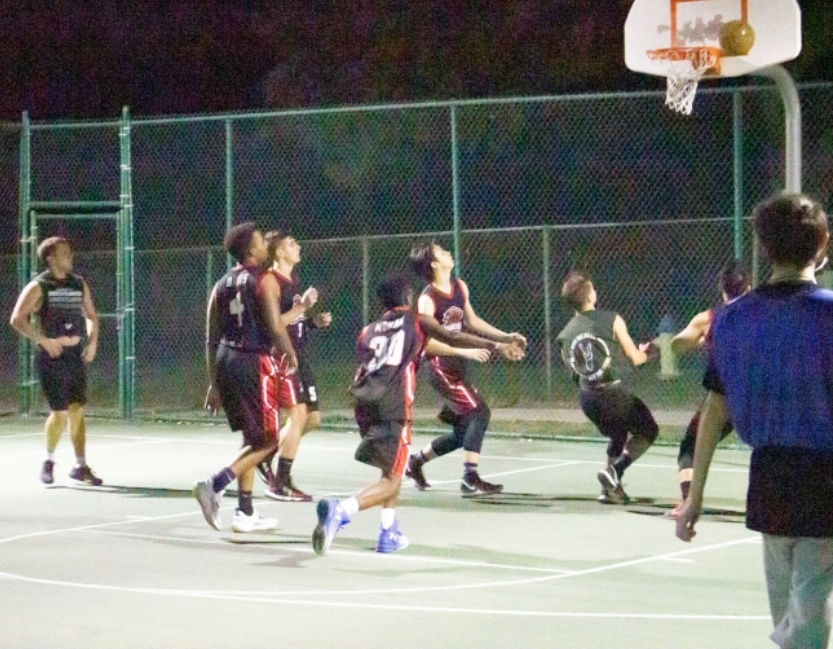 Players in the tournament chasing after a rebound. Photo taken by: Alsu Subkhankulov. Photo Courtesy of: Jacob Brody-Ogborn.

New College is not known for its sporting prowess, as the college lacks any organized sports. However, there are a handful of casual sporting events on campus, such as weekly Wednesday court soccer, the faculty and staff versus students Softball tradition that returned this year and previous football games held between the University of South Florida (USF), Ringling College of Art and Design and New College. In a similar vein as the last, a new addition was founded on Friday, Oct. 22: a USF/NCF/Ringling basketball tournament.

The idea was originally conceived over the summer by thesis student Jacob Brody-Ogborn as a community basketball game within New College between faculty, staff and students. When Brody-Ogborn shared the idea with Fitness Center Director Colin Jordan, he saw a good opportunity to incorporate the Cross College Alliance (CCA), adding Ringling College and USF Manatee. After some deliberation, they settled on a tournament style. Jordan and Brody-Ogborn then contacted the fitness center directors at Ringling and the USF-Manatee campus who met them with enthusiasm.

“Ringling has a basketball team that practices every week,”  Brody-Ogborn explained. “USF has people who do pick up and a semi-team. NCF just has students that do pick up games.”

The first tournament took place at the NCF basketball courts, and captain of the Ringling team Zach Grzymala wrote up the rules.

“The actual tournament was a success,” Brody-Ogborn said. “Everyone had fun. Ringling had a lot of spectators come, USF and NCF also had some spectators show up. There was a scoreboard, music, food and a lot of energy.”

The tournament’s success has propelled discussion for more games, with the current idea being three games a semester, “with the very last game being a big fundraiser event.”

According to Brody-Ogborn, the next game is tentatively set for Nov. 19, and he waits with excitement about the future rivalry between the three colleges.