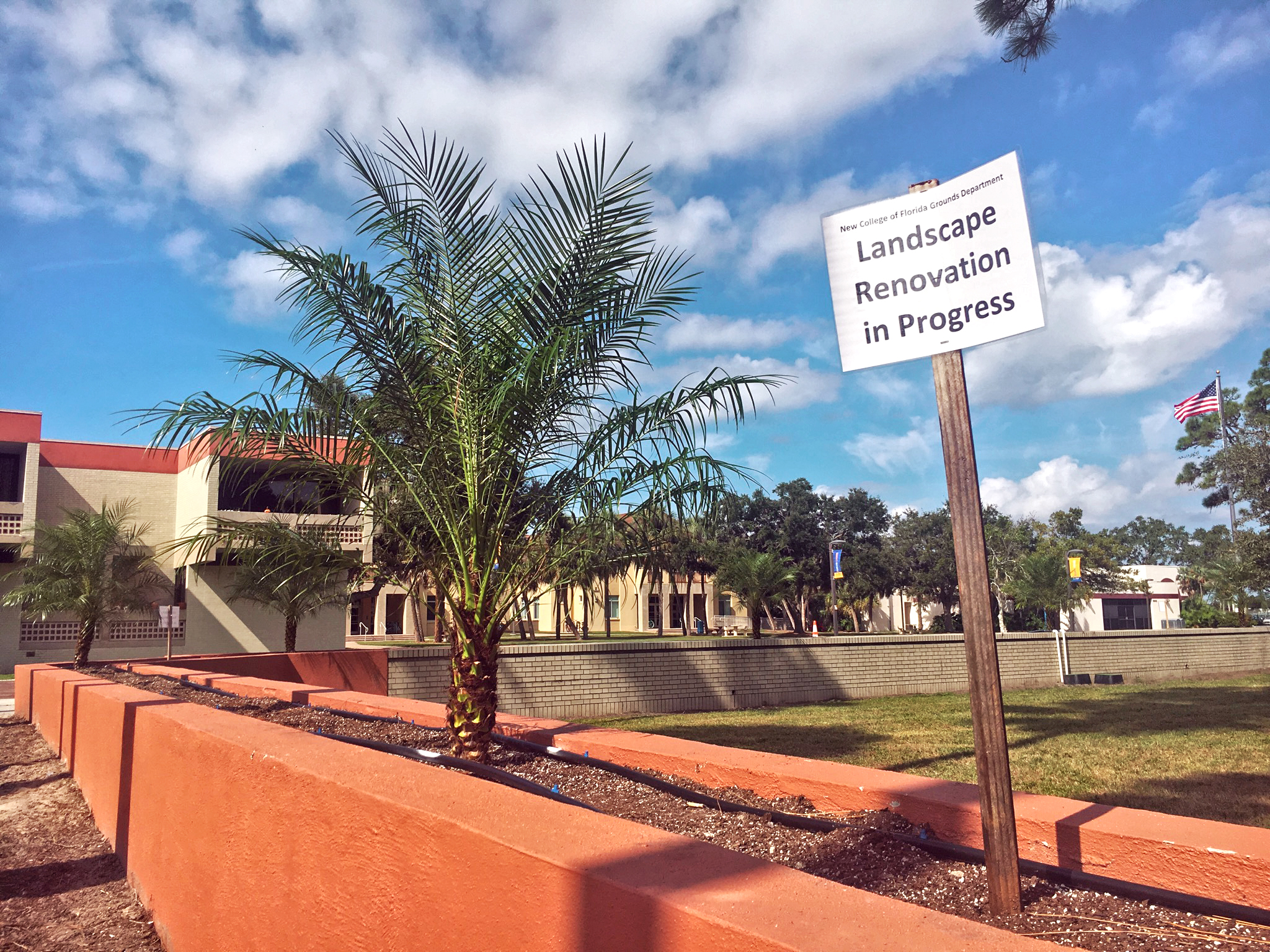 Over the past few weeks, students passing by the planter on the perimeter of the Nook and Second Court have stopped to ask, “Has it always been that color?” The signs saying “Landscape Renovation in Progress” provide an answer, but most students do not know anything else about the project. In fact, many remain unaware of why changes were needed in the first place.

“We started on the project because the plants that were there previously were overtaking the planter,” thesis student and Physical Plant employee Hannah Sine explained. “It caused parts of the planter to crumble away.”

At a minimum, repair became necessary, but Landscaping Coordinator Robert Audet saw it as an opportunity for major change.

“The planter project is very important because that area has the highest level of pedestrian traffic on campus,” Audet said in an email interview. “That means that it could have the biggest impact to the students living on campus.”

Motivated to improve the aesthetic appeal of the residential side of campus, the landscaping team got to work. One of their first tasks was to remove the three kinds of plants previously in the planter. Audet explained that the planter’s bromeliads—those pink, pineapple look-alikes—will be re-planted elsewhere, but the birds of paradise and coonties were unsalvageable. The coonties, which created ruptures in the planters, needed to be cut apart and extracted. The birds of paradise received little water, effectively becoming “birds of drought.”

In general, the lack of accessible water on the residential side of campus prevents many landscaping projects from being carried out east of Tamiami Trail. In order for this project to work, for example, Audet said the grounds crew “had to trench over 200 feet and go under two sidewalks to get water to the planters.” They also completely replaced the soil, as much of it slowly deteriorated without a steady source of irrigation. This issue explains why the planter has remained with nothing but laminated sign-posts for such a long time.

“Like most of our projects,” Audet said, “the prep work goes unseen and is the bulk of the project.”

But the planter will not be bare for much longer. According to meeting materials for the landscape committee, additions will include crown lilies, which are towering plants, flanked by bright pink flowers and crossandras, which sport sunset-orange flowers. The first round of new plants has already been planted, and students can expect more as early as this week.

The New College Student Alliance (NCSA) also advocated for the renovation, seeing it as a low-cost opportunity to improve the quality of the residential campus.

“[Physical Plant Director] Alan Burr and I took a tour of the area and upon inspection of the conditions, we concluded that renovations that we can afford must take place,” NCSA President and third-year Steven Keshishian said in an email interview.

The project presented an easy cost-benefit analysis for the NCSA, since none of the money for the renovation came out of their stretched budget.

When asked about the possibility of future landscaping projects, Keshishian expressed interest, noting that the “NCSA and Physical Plant have joint stakes in creating a physical environment that is beneficial to the student body.”

Audet has his eyes set on further changes to the Nook. He will be working with fourth-year Deric Harvey to create a native garden next to the Banyan tree. In addition, he plans to landscape the overpass area between Sudakoff Conference Center and Z Dorm.

As Audet pointed out, though, these projects are only possible through scrupulous planning and hard work, of which students are mostly unaware. Every weekday, grounds crew members wake up with the sun, getting an early start to beat the heat and put in the extensive effort required to keep our campus beautiful.

Sine had nothing but praise for her fellow grounds crew workers, who have welcomed her into the job with open arms. She says her experience working with them has given her a new appreciation for the little things on campus, noting that she now has “a vested interest in what the campus will look like.” Compared to other jobs she’s had, this one has been one of her favorites: “It’s a lot more rewarding than Starbucks than was.” Expect to see her, as well as other grounds crew employees, putting the finishing touches on this renovation project in the coming weeks.