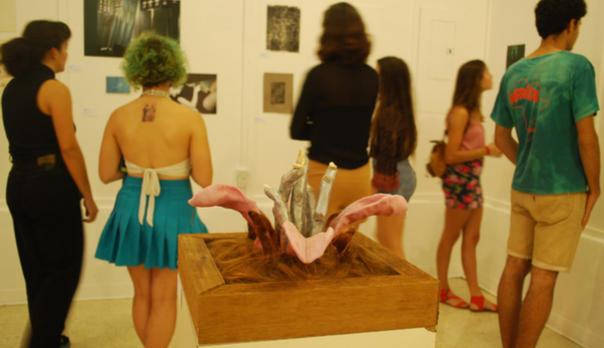 This was intentionally not the case this past Saturday evening at the Four Winds’ student art show, an event the café would like to see become a recurring tradition.

Both co-managers displayed pieces of their artwork in addition to nine other students and alumni. There was a mix of photography, prints, paintings and sculptures hanging on the walls or displayed on stands around the café, which had been cleared out to perform as a gallery space.

“We’re giving the artist an opportunity to price and sell their work if they want to, since it is all really nice,” Schultz said. “They definitely submitted their best.”

The larger Sarasota community was invited to attend the show through an advertisement in the Herald-Tribune and a Facebook event page. This welcomed a new audience for the students displaying their work and brought potential buyers in from the surrounding area.

Isermann Gallery in Caples is virtually the only venue on campus for students to display their artwork – and that’s only if they are art students. Isermann holds a couple of shows a year but only one is open to non-thesising art students and is rather competitive to get into.

“We wanted to provide an alternative gallery space and give students a space for their art,” Schultz explained. “Since the walls are painted white now, Four Winds is a really good place for a gallery.”

Before white, the walls were a dark sea blue, giving the place a more playful atmosphere. With the switch to white walls, Four Winds adopted a sense of togetherness and invited more versatility to the space.

“I hated the blue, it was not the blue that I expected to happen,” former Four Winds manager Olivia Levinson said. Levinson was in town for the weekend of the show and got the opportunity to see the café transformed into an art space.

The art show was not the only time Four Winds actively spotlighted New College student’s creativity and artistic skill.

The semester before becoming manager, Levinson requested money from the Student Allocation Committee (SAC) to get a bunch of canvases and paints. She brought the art supplies to Woodstock wall and invited students to create artwork to decorate the walls at Four Winds.

“Art helps the student to reclaim the space as their own, creates talking points for students and reestablishes the sense of community,” Levinson said.