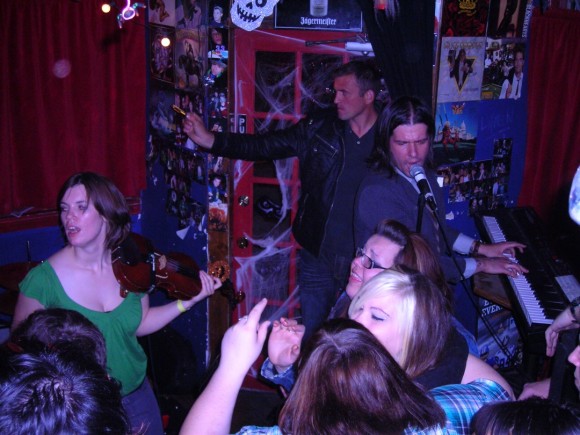 Check back in next week for the rest of the saga, including the final show in Jersey City, pictured here. Brandon Rainer pounds the keys (right) while yours truly cuts a rug (left).

What follows is the story of how I, New College student Sara Stovall, ran away from my classes, my papers and my thesis for two weeks with fiddle in hand to join the roots-rock band River City Rebels on a short, but intense, 11-day tour. The cast of characters includes:

Dan “The Bopper” O’Day: guitarist and frontman of renown.

Our first jaunt with the massive Ford Excursion and 4’ x 8’ trailer was a short one: less than 15 minutes from Lebanon to Hanover, NH, where we’d been booked to play a party at Dartmouth College. The Tabard Building is basically a co-ed frat house, if that makes any sense. I thought it would be great to play for a crowd of my own peers. It’s not every show that I get to stand around with fans and talk about midterm pressures or the anatomy of pre-Baroque stringed instruments.

The night started out cool, but quickly got weirder and weirder. The students held a house meeting before our show, in which they made house announcements, “sank” some new pledges and drank copious amounts of alcohol. By the end of it, the meeting had degenerated into a sloshfest.

“For once, we’re not going to be the most obnoxious thing here tonight,” Dan told me. Thus launched the first show of the tour. About a dozen local fans turned out to fill the front rows while the majority of the Dartmouth crowd skulked off somewhere, I assume to guzzle more booze. But the pull of the rock was irresistible, and by the end of the set the crowd had grown to about 40, most of them totally new faces. I could hardly believe my eyes: they all were dancing.

I woke up in the truck at about 4:00 a.m. to find we’d stopped somewhere in northern New York.

“What’s going on?” I mumbled from the back seat of the truck.

“We broke down, Sara,” Brandon replied from the front.

This is a typical example of what I like to call “Rebel luck.” Sometimes I’m amazed that this band has hung in there for so long, because the sailing is never ever smooth. On my first tour with them the band was so hard up for cash that we toured for over three weeks in an ailing Dodge minivan: five musicians, all the gear and instruments and our luggage were crammed inside. I was jealous of sardines that tour. My second go-around with them was in Europe, and not five days into the tour, our van got robbed in Rome. The thieves didn’t touch our gear or instruments, but made off with every single last suitcase.

Two hours later, a tow truck finally arrived. Dan hopped into the rig with the driver. The rest of us enjoyed an extraordinarily surreal view from the inside of the Ford as we were hauled onto the flatbed and carted down to a Firestone. The driver let us down and we proceeded to take over the tiny waiting room. I curled up in a blanket on the floor and slept soundly while the Firestone guys replaced the truck’s alternator.

“Remember when this band had money,” Brandon reminisced, “about two hours ago?”

Buffalo, NY hosts a very special brand of Rebels fan. The first time I played there with the Rebels, this group of females shocked and disgusted me. They don’t wear much, and about 25 percent of it consists of eyeliner, lipstick and hairspray. They don’t care to spend money at the bar, either, so they smuggle in flasks of firewater and sling it back in the bathroom until they can no longer stand up. I don’t imagine the stilettos help. Some of them bring their own tambourines, and once they are sufficiently hammered they proceed to thrash around on the dance floor, falling all over each other and spilling their booze-laced sodas. The more adventurous damsels crawl up on the stage. Well, they make a spirited attempt anyway.

I hated them at first, but this time I found them oddly comforting. These girls are born of a bygone era in RCR history, namely the Hate to Be Loved days when the band reigned glam-punk supreme. The girls naturally wanted to hear those tunes, but I was impressed when they caterwauled out names of songs from more recent albums. We delivered as best we could, and they sopped it all up eagerly.

The Cheats are one of my favorite bands that join us for shows on tour. They’re based out of Pittsburgh, and their lead singer, Big Todd, always shows us a crazy good time in the finest rock-and-roll tradition. I didn’t smell any trouble until I found out we were the last of four bands, and the show started –– at the earliest ­­–– by 10:30 p.m. This usually means that everybody, musicians and audience members included, are completely trashed by the time the headliner takes the stage. Dan also tends to get nervous when playing in front of friends; plus, the Cheats put on an extremely tough act to follow.

None of us were playing spectacularly well. JV popped a string out of her bridge early on in the set and had to borrow the Cheats’ bass. Dan was making erratic changes to the set, cutting songs after we’d started playing them. But the crowd members left standing seemed to be having a good time. We’d reached the last song of the set, and I was ready to throw in the towel. Dan started playing a riff that I don’t recognize, and Rob started to back him up with a simple beat.

Before I had figured out what was going on, Dan snapped. He threw his guitar on the floor with a crash and ran back to the drum kit to get in Rob’s face. He screamed, he frothed, he grabbed Rob’s sticks and began aping Rob’s beat, yelling “I can play better drums than that!”

At this, Rob shot up from behind the kit and stormed out the front door. Dan stormed backstage. Brandon, JV and I were left on the bandstand. We looked at each other, at the stunned crowd, at the doors and back at each other. I had no idea what to do except suck down the rest of my whiskey and switch off my amp.

What followed next was a screaming match between Team Rob-and-Sara and Team Dan-and-Brandon, with Big Todd as referee. I left when I’d packed up the fiddle and thrown in my two heated cents, so I missed it when Big Todd fell backward and dented Brandon’s keyboard case. It was definitely time to call it a night. We all made our apologies, exchanged some conciliatory hugs and drove to Big Todd’s killer apartment on Liberty St. for the after-party. Which was really good. I think that’s about all I’m legally permitted to print about it.

She got four utterly blank stares in response.

The show in Lansing provided an enormous turn-out: over 200 people, easy, came out on a Monday night to catch us on the bill with psychobilly greats Goddamn Gallows and the Creepshow. We needed the morale boost dearly in order to survive the drive back to Lebanon that night. All told, it took us about 18 to 20 hours. Ordinarily it should have taken perhaps 14 hours, but we suffered a setback or two. Most memorably, the band left me behind at a service station in Wyandot, Ohio. It was 5:00 in the morning, so I suppose I can’t blame my fellow band-mates for being a little groggy and absentminded. But it kind of stung to know that they could have gotten a lot farther than 20 miles down the highway before they’d have noticed I wasn’t in the truck. Good thing I had my cell phone on me.

We skipped the show we’d booked for Tuesday night in Toledo. Everybody in the entourage was sick, getting sick, or getting over some sickness. I personally was having a tough time dredging up the energy to play the fifth and sixth straight shows, so a night off came as a welcome respite from the road. Our show in Boston the next night was small, but we definitely did some of our highest quality playing that night. The ensemble was getting very tight, despite the fact that the last time I played these tunes was in January; despite the fact that this tour was JV’s first time playing with a band in 10 years. My sister drove out from Providence to catch the show She loved the show. We drank gin drinks and ultimately had a tough time saying goodbye.

The band gets the royal treatment every time we play in Kingston, NY: the owner of Snapper Magee’s stuffs us with free burritos and then throws us more drink tickets than we can shake a stick at.

Scranton, PA was simply glorious. We drove from Kingston that night to crash at our good friend Mike’s house, where Rob and I stayed up until after 7:00 a.m. drinking beers with Mike and his girlfriend Bella until passing out on the floor. I then snuck out around noon to spend a couple of sweet hours by Lake Scranton with Tim, the love of my life, who flew all the way up from Sarasota to catch the last two shows of the tour. I’m so glad he got to catch the show that night. We ripped through the set in front of a boisterous crowd of die-hard Rebels fans. They knew the words to every song. They danced. They moshed. They crowd-surfed and stage-dived as much as the tiny café permitted. I became their musical super-heroine for one night.

Our final show went down in Rob’s hometown of Jersey City. We squeezed into the front of a tiny bar called the Lucky 7 Tavern. No stage for us –– the crowd pressed around us until I thought they’d push us right back out the door! I’m not a big fan of playing on the floor, due to my fill of past experiences with accidentally stabbing folks with my bow, jerks sloshing beer on my fiddle, or worse: moshers slamming the mike into my face. Dan and Brandon have a few chipped teeth between them as tokens of shows on the floor. Fortunately, this crew was all smiles, dancing and singing along.  Very well-behaved, in my opinion.

Touring is an exhilarating experience, but it’s one of the most grueling lifestyles imaginable. It’s also addicting. No matter the bumps, scrapes and brouhahas, I’ll always be rarin’ to hit the road again