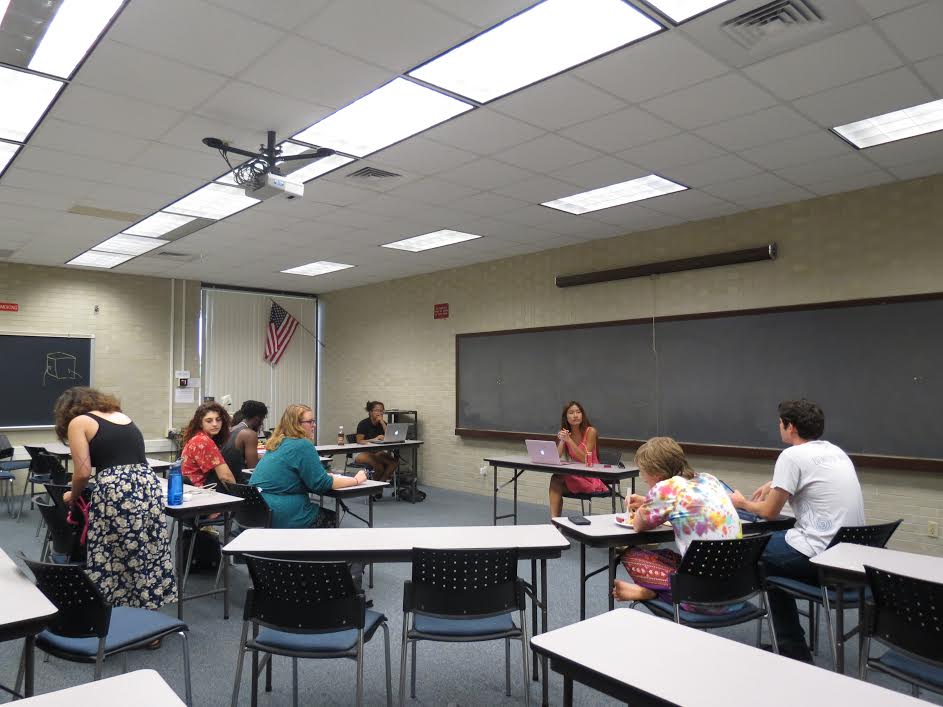 After a special election put thesis students Paige Pellaton and Shelby Statham in the position for a year and a half, the New College Student Alliance (NCSA) presidential torch has been passed down to third-years Miles Iton and Paul Loriston. The new presidents chose an Executive Cabinet soon after their election last Spring.

Loriston and Iton have focused on a few key objectives for the first 100 days of their presidency. “We want to be working on the scholarship, our platform—getting more people involved in the Sarasota community,” Loriston said at the Sept. 4 Cabinet Meeting. “We also talked to Campus Police about staffing, and we’ve been talking about a pick-up game with students and the officers. We haven’t scheduled any more logistics on that, but we’ve gotten [Chief] Kessie and all of them to think it’s a great idea.”

“We’ve also dealt with Wall issues, dealing with staff, trying to coordinate and still have Walls,” Loriston continued. “Essentially, asking for money to pay police officers to extend the time of Walls.”

“We’re also interested in throwing an HIV/AIDS on Festival, including Michael Kehoe from the CARE services,” Loriston added.

At that same meeting, Morton spoke about the Council of Green Affairs’ first 100 days as well. “We’ve been focusing on doing zero waste plans, the food forests, a subsidiary with the CAA and a labyrinth on campus with the Four Winds logo which is on the Master Plan,” Morton said. There was also a mention of solar panels for the new building by Heiser being constructed.

The Council of Diversity and Inclusion’s primary goals over the next two semester will focus on the Day of Dialogue, Gender and Diversity Center (GDC) and making a FemZine happen.

“I think it’s a really important space on campus. It’s also a space where a lot of transformative and radical things happen,” VPDI Al-Fatafta said about the GDC. “I think I want CDI meetings to happen weekly instead of biweekly,” she added at the Cabinet Meeting.

On the other hand, VPAA Sheinwald is gearing up for the Council of Academic Affairs first allocations session—where students are funded for their academic and educational pursuits—on Sept. 18.

“I probably will encourage my representatives to also have mini-events. I also might have an event myself on what the CAA will and won’t fund to increase awareness,” Sheinwald said.

Unlike the other vice president positions on the Executive Cabinet, the VPFRA position does not come with its own council.

“I mostly want to work on retention rate,” VPFRA Kane said about his goals for the new year at the Cabinet Meeting. “There’s a retention task force—we’re trying to meet in the next two weeks. I’m also working on a study to see the financial aspect of New College to the Sarasota community for funding purposes. Right now, we’re just doing a literature review and then probably a survey to the school to show that the community should help us and give back which can contribute to our retention rate.”

VPSL Doescher just finished the new Wall selection process. Previously, students lined up in Hamilton “Ham” Center to nab the Wall theme and date of their choosing. In order to make the process more inclusive and accessible, Wall selections are now ran through an online survey.

“The Deputy Secretary would have to attend all council meetings as an official record taker including all meetings held by members of the Executive Cabinet,” Loriston said at the Towne Meeting.

“As Executive Secretary/Archivist, I record what happens at all Towne and Cabinet Meetings and make them available to the student body. I also manage the Archives room, which contains records dating back from New College’s first days as an institution,” Executive Secretary and Archivist and Catalyst Managing Editor Giulia Heyward said about her position in an email interview.

“I’m focused on improving the NCSA’s visibility and involvement on campus,” Chief of Staff Chenyao said about her goals in an email interview. To do this, Chenyao plans to clear up how the NCSA works, clarify duties and expectations of reps, spotlight accomplishments of a New College student each week and host more NCSA events.

“The first order of business is to refine the Towne Meeting’s Rules of Procedure as well as streamline and make the Towne Meeting and legislative process more open and accessible to the student body,” Herzog said in an email interview. “Part of this plan includes the accessibility measures I’ve already taken. I am shifting the traditional Towne Meeting from Wednesdays to Sundays to accommodate students with late classes and TA sessions. I also plan to further address issues with access to the Towne Meeting due to physical disabilities such as the creation of the Towne Meeting Rug.”

“With the introduction of new members to the administration, I will also strongly encourage attendance at the Towne Meeting by the members of upper and middle administrative offices,” Herzog said. “Finally, I will begin preparations in the next few months for the end of my term as Speaker of the Towne Meeting including creating passover documents, meeting with students interested in running for the position, and instituting positive reforms as necessary.”