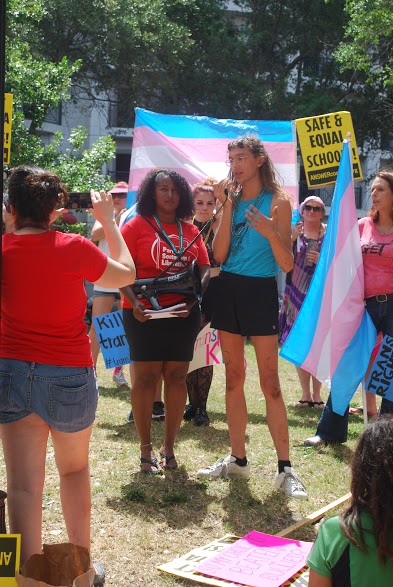 Sunday morning saw more than 100 people gather in front of the Selby Public Library at 11 to march for Trans Rights. Water, beads and sunscreens were passed around, as well as signs that said “Hate has no place in our education system” and “Safe and Equal School.”

The wider Sarasota community joined students from middle school up to the college level in the fight for inclusive school board policies for trans and gender nonconforming students. The march was the culminating event of the API! Conference, a student organized academic conference in its ninth annual year. Organizers from API! joined with the Suncoast Chapter of the Answer Coalition – a national coalition of anti-war and civil rights organizations – to put the protest together.

With anti-LGBTQ laws on the rise, most recently the bill passed in North Carolina that deliberately took away the right for transgender students to use the bathroom of their preferred gender, local action such as this march is a vital tool for amplifying the voices of the trans community.

“Seeing so many people here makes me so thankful for people who actually understand that there is an issue here,” one of the speakers expressed at the start of the event. “I don’t want anyone else to go through what I went in school.”

After a series of speeches, the march kicked off with an activating shout: “WOOT! GO TRANS RIGHTS!” And the mass of people holding colorful flags and signs marched towards the unexpecting downtown of Sarasota.

The protest is lobbying for a set of policy demands called #Nate’sList, named so after Nate Quinn, a transgender student from Pine View High who won the right to use the bathroom of his choice. While this was a fundamental victory over the Pine View administration, unfortunately this rule only applies to Quinn and is just the start of the fight for trans inclusivity.

“This has been a great opportunity for Pine View to lead the way for other schools because even though our school district doesn’t have a non-discrimination policy that enumerates gender identity and gender expression to protect trans students, the schools can individually come up with policies and guidelines,” New College alum Molly Swift (‘08), now a program coordinator at ALSO Youth, explained.

A non-profit organization, ALSO Youth has been watching out for the safety and wellbeing of LGBTQIA youth in Sarasota schools since 1992.

“I think [the march] is very significant for the wider community, just seeing such a large group of articulate, powerful people – young and old,” Swift said.

Despite it being a Sunday morning in sleepy Sarasota, there was certainly an audience for the march. One woman waved frantically from behind a shop window holding a small sticker with an equal sign on it.

Another woman was apparently late for a date. Caught behind the throng of people marching, she edged her car forward anxiously until a member of the march blocked her from getting too close, allowing the protesters to pass safely.

At the march, students from Pine View and other Sarasota high schools banded together to support students in the very same position as Quinn. A determined group, these students have engaged with the Sarasota County school board in a variety of ways, from organizing marches and protests to sitting in on and speaking out at school board meetings.

The fight has stretched on for months now and the Sarasota School Board has remained in a motionless state of apathy.

“Currently there is a lot of fear around the issue because it is election year,” Swift said. “There are two spots that are going to be opening up on a school board of five members and even the ones who say they are supportive of trans inclusion are too scared to bring it to a vote because they’re scared that it will be seen as extreme.”