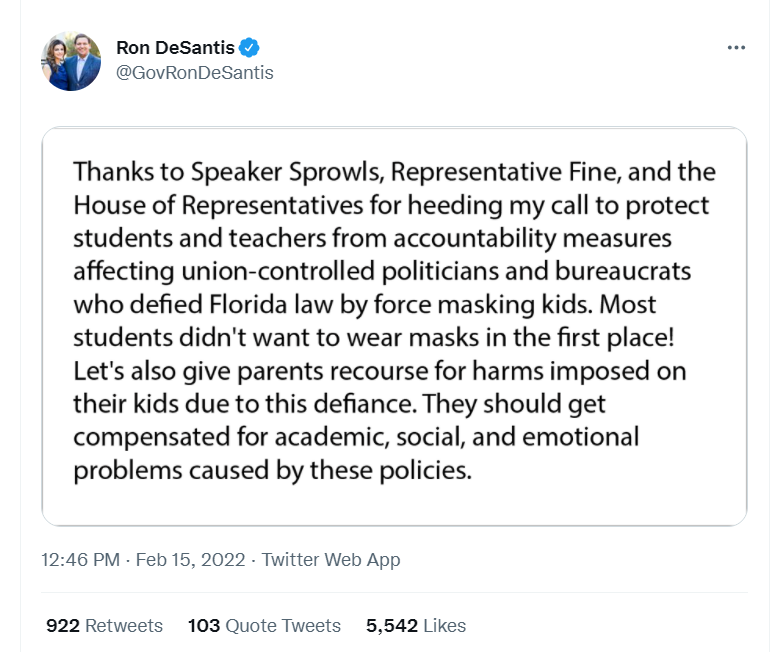 On Feb. 15, Sarasota lawmakers—along with the rest of the Republicans in the Florida House of Representatives—passed the “Putting Parents First Adjustment.” How it puts the parents first, exactly, is unclear, but what isn’t is the point of this seemingly minute adjustment to the state education budget. Over $200 million is being divested away from the 12 school districts—including Sarasota—that enforced mask mandates over the past school year, with that money being split between the remainder of Florida’s 67 school districts.

Recently, State Representative and Republican Randy Fine began to campaign for the “Putting Parents First Adjustment.” The explicit goal is clear—Fine wants to punish those districts that enforced a mask mandate in the classroom during the 2021-2022 school year.

”They didn’t defy the mask ban; they broke the law,” Fine stated. “They acted in an illegal way, and they engaged in the second-largest, state-sponsored act of child abuse in the history of Florida.”

This money, allegedly, will be taken directly and exclusively from the central administration, and Fine claims that it will have no impact on the teachers, other staff and actual students in the district.

The Communications Director of the Sarasota School District was unable to comment on this proposed legislation. Whealey Kelsey, an employee of the school district, claimed that the county was not allowed to speak on proposed legislation and that all they can do right now is monitor the situation. When asked about a further mask mandate later in the semester in the case of a new variant spreading again, Kelsey was similarly tight-lipped, stating that he was “not aware” of any plans to reintroduce mask mandates in the case of a more intense breakout.

This adjustment to the budget comes at a time when the budget is overall increasing, which has allowed Fine to easily switch between framing it as a reward for the districts that followed Florida policy, or a punitive way to punish those districts that didn’t. It’s unclear how, exactly, this will impact the budgets of these districts. Sarasota, for its part, is losing about $12 million out of its budget, and while Fine claims this is only for the core administration and won’t hurt the teachers or students, it’s hard to tell what that actually means.

Most interestingly, Fine seems to be breaking from the party line and banking successfully on Florida Governor Ron DeSantis falling in line. DeSantis was actually a frequent detractor of the movement, recommending that the state allow parents to sue if their child faced medical issues from masks. Fine, however, did not respond to these claims.

By the time the bill was in the house, DeSantis had flipped to becoming a proponent of it, claiming some amount of credit for its passage in what seems to be an attempt to latch onto the bill for political goodwill in right-wing news circles.

Sarasota will be losing an estimated $12.6 million from its budget, with the Miami district losing over $70 million.