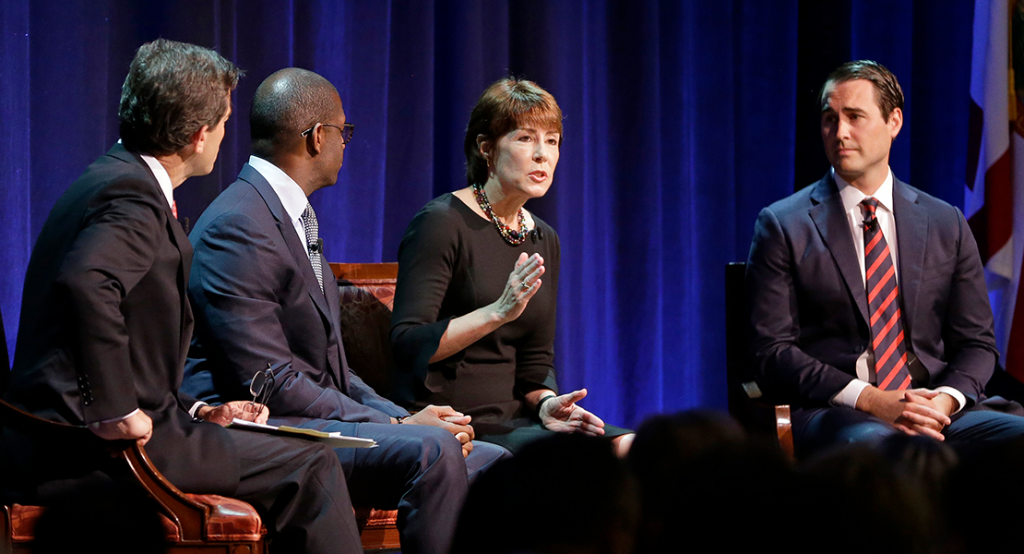 The start of November marks approximately one year until Florida’s 2018 gubernatorial election that represents the long-awaited end of incumbent Republican Governor Rick Scott’s eight-year term. Currently four democratic candidates have declared that they will be running in the primary race for Florida governor: Andrew Gillum, Gwen Graham, Chris King and Philip Levine.

Andrew Gillum was born in Miami, was the first in his family to graduate college, is the youngest person in history elected as the Tallahassee City Commissioner and currently serves as the mayor of Tallahassee.

During his term as mayor, Gillum supported the city of Tallahassee in joining the Ban the Box campaign, an international civil rights campaign that encourages employers to remove the box on applications that asks if potential employees have a criminal background, under the premise that applicants should have the chance to display their qualifications before being labeled as a criminal.

Gillum is running on a platform that considers healthcare to be a fundamental right and supports Senator Bernie Sander’s Medicare for All plan. He opposes high-stakes testing and teaching to the test and believes that all children should have access to training for a career or college education that will not leave them in debt. Gillum will push for equal pay legislation, will protect and encourage women-owned businesses and will trust women to make their own healthcare decisions. Gillum is “the only candidate for Governor who has led to oppose both Donald Trump and Rick Scott’s policies that target immigrants,” according to his campaign website.

Gwen Graham was born in Miami Lakes, went to college and law school and worked as a private attorney. She volunteered at her children’s school and worked for the local school district. In 2014, she ran for congress against a conservative incumbent and won, becoming one of the two democrats across the country to defeat an incumbent republican.

During her term in Congress, Graham participated in a sit-in to demand commonsense gun safety, supported President Obama’s Deferred Action for Childhood Arrivals (DACA) program, voted in support of President Obama’s Clean Power Plan and voted in favor of the Keystone Pipeline.

As governor, Graham promises to end corporate profits from for-profit charter schools and high-stakes testing. She will focus on keeping university tuition low and will fully fund need-based assistance programs. Graham supports a constitutional amendment that aims to restore voting rights to citizens who have completed their sentences. Further, she aims to encourage and increase voting access by fighting for automatic voter registration for all Florida citizens.

Graham aims to make the sunshine state the solar state, she will veto any law that infringes upon a woman’s right to choose and will “fight for a statewide human rights statute that bans discrimination for gender, sexual orientation or gender identity and she will sign an executive order immediately doing the same in the governor’s office,” according to her campaign website.

Chris King was born in Orlando, went to college and law school and launched a purpose-driven business that revitalizes homes for fixed-income seniors and working families. King is not a politician, but is still active and involved. His foundation funds programs that provide mentorship opportunities for low-income Florida students interested in pursuing a college education.

As governor, King vouches to increase Florida’s minimum wage, to protect women’s right to choose, to protect Florida’s beauty by acknowledging the impact of climate change, to increase access to health care–considering 2.6 million Floridians have no health insurance–and to extend bans on lobbying in state government.

Philip Levine was born in Boston, Massachusetts, and moved to South Florida at the age of 10. He became a public and private entrepreneur and was elected as Mayor of Miami Beach in 2013.

As a two-term mayor, Levine combatted sea-level rise in Miami, fixed a broken police department, decriminalized marijuana and made Miami Beach one of only a few cities to consecutively win perfect scores for LGBTQ+ inclusiveness.

As governor, Levine wishes to make Florida a leader in solar and renewable energy, to raise the statewide living wage, to allow children to attend college debt-free and to make Florida more inclusive, “where everybody is treated equally—regardless of race, creed, gender, or origin,” according to his campaign website.