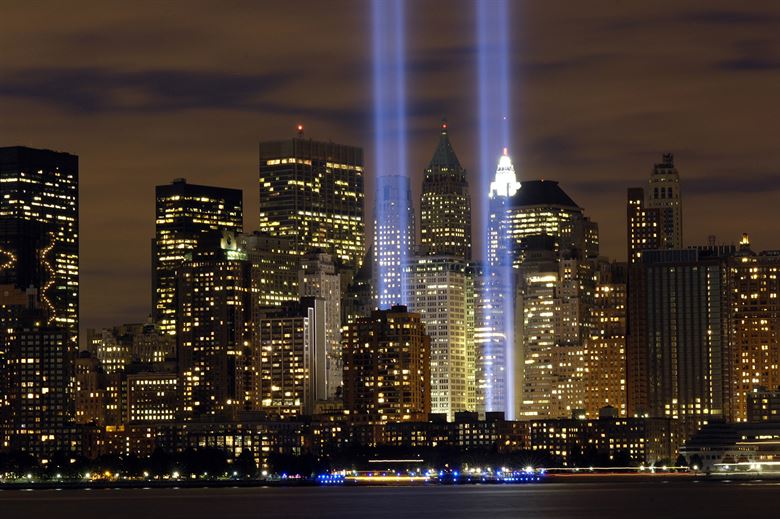 Another year and 9/11 has crept up on us unexpectedly. It happens like this each year for me: days change to the next and suddenly it’s here. September. I always freeze when I see the month. I remember there are plenty of birthdays to fill the month with joy, but I also remember a date we have to get past before they can all be celebrated. September 11th.

September 11, 2001 in New York City. The streets are bustling as people go about their morning commute. A firefighter kisses his wife on the cheek and pats his daughter on the head before leaving out the front door. An assistant spills her to-go coffee as she pushes through a crowded subway. She wipes the spill off her watch and she picks up her pace, alerted by the time.

My cousin, Mary Meeney, walks out the door of the train, arriving one stop away from Manhattan. She has just taken the train from Jersey City, where she lives in an apartment block owned and operated by her mother, Roseann. My mom grew up not far from that apartment, in the projects, where she shared two beds with her eight siblings.

As Mary walked on, she couldn’t help but feel she had forgotten something. She racked her brain, thinking of what it could be. Suddenly she remembered. “My keys! My keys!” she exclaimed to herself, under her breath. She had to make a split decision as the train headed back for Jersey City was about to board. She decided to head back. Knowing this decision would make her a little late for work, she thought it would be better that way then walking home late in the dark.

She arrived to her apartment and opened the door. She had left it unlocked in her morning rush. From the foyer of her apartment, she could hear the faint talk and commotion coming from the TV, which she had left on to keep her cat company. She walked towards the alarming sound of the reporter. In front of her she saw her workplace. The World Trade Center had been crashed into in a terrorist attack. People were frantically running in the streets. The world seemed to crumble before her eyes. She clutched her heart and said a Hail Mary, thinking it was God alone who had made her forget her keys.

My cousin Mary was lucky to have been diverted but not many other people were. Around 3,000 people were killed during the 9/11 attacks. Thousands of people have had health issues as a result of the toxicity of the events. According to the 2018 Costs of War research done by Brown University, “Between 480,000 and 507,000 people have been killed in the United States’ post-9/11 wars in Iraq, Afghanistan, and Pakistan.” 18 years later and America’s troops are still engaged overseas. And as more soldiers die everyday, many journalists question if the war has done more damage than good.

The widespread slogan for commemoration of 9/11 is “Never Forget.” But what I have come to learn is 9/11 is not history, it is present day. Not only in terms of the war overseas, but how the American people and government treat national security threats in general. Some of the most important symbols of contemporary American power were destroyed on that day, and since 9/11, America has never been the same.

As an adolescent, my mom would let me skip school and we would spend it together at home, watching commemorative footage all day. I have yet to see any communication from my college in regards to a 9/11 commemorative event, which I feel is a necessity for today. This day is not to be taken lightly and should be treated with the utmost respect. What do I say to people my age who don’t seem to care about 9/11 because they were “too young to experience it”? Educate yourself, because it was and still is a national tragedy that forever changed the heart of America.

I stand by the American flag. There have been lots of horrific events that this nation has done, including slavery, the slaughter of indigenous people, and more, but if we cower in the face of these ignorant leaders, than how will we ever change the state of America? Something about people my age is that we get upset and argumentative about a lot of things, but when it comes down to it, we don’t try to fix any of the problems. A part of growing up is realizing that we naturally inherit a responsibility for our country and planet. I am proud to be alive and I am proud to be where I come from.

Right now we have many greedy, often racist, and ignorant leaders in power. That is exactly why we have to fight and stand by the values that make up the true America, which are freedom, acceptance for all and equality, among others. Otherwise, who wins? Fear or Love? Some say heaven is on earth, and in a dual universe, that means hell must exist on earth as well. Perhaps that’s why I’ve had my Virgin de Guadalupe prayer candle lit all day. I didn’t blow it out after my morning meditation, and throughout the day, I have watched the warm orange flame flicker as it lights up the silhouette of the Virgin Mary. As I write the story of my incredibly lucky cousin Mary, and amidst the terror of war, I find solace in the warmth of our shared heart.