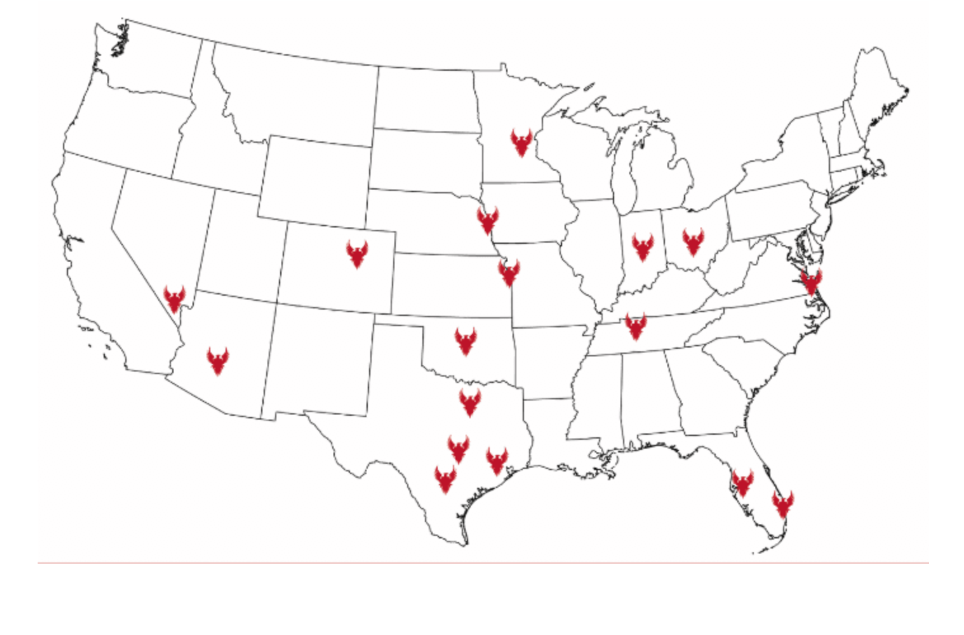 Map of all future 88 Tactical locations. (Courtesy of official website.)

Based in Omaha, Nebraska, the controversial gun club facility 88 Tactical has drawn attention from all over the country for the not-so-subtle use of neo-Nazi dog whistles. This is not an isolated bastion of white supremacy; the company has recently announced plans for expansion in every part of the country except the Pacific Northwest—including our neighbors in Tampa and Fort Lauderdale.

Starting with the name “88 Tactical,” the dog whistles jump out immediately. What owner Shea Degan, former Omaha police officer, claimed on a forum post is Omaha police code for “situation secure” is clearly contradicted by years of neo-Nazis using the term “88” for years to mean “heil Hitler.” The brazen use of Nazi symbols doesn’t end at the name. The logo on the Omaha fortress is a big red phoenix that clearly resembles the Reichsadler eagle used by the Nazis. A giant red bird facing right with its wings spread is undoubtedly the use of plausible deniability, the most common indicator of dog whistles.

To help erase any doubts, one of the most prominent neo-Nazi codes, 1488, was shown on an incorrectly labeled topographical map which has since been removed from the wall of the Omaha location after backlash online. The number 1488 was popularized by neo-Nazi David Lane as a reference to Hitler’s Mein Kampf and denotes the sentiment of preserving white supremacy with the addition of the 88 at the end. Degan’s business additionally promotes Black Rifle Coffee Company on their Instagram, which has throughout the years attempted to be the conservative equivalent to Starbucks. Black Rifle also endorsed former President Donald Trump’s Muslim ban and features a line of coffee called “silencer smooth” with “SS” being boldly printed on the middle of the bag.

This news is especially frightening as two of the proposed locations are planned to be built in South Florida and will seek to embolden and train conservative reactionaries. The recent firebombing of the Donut Hole in Tulsa, Oklahoma is a scary reminder of what can occur when enraged conservatives are given the support and encouragement from facilities such as 88 Tactical.

The Omaha compound—featuring a massive watchtower overlooking the facility and surrounding area—has furnishings for shooting ranges, a fitness center, law enforcement training courses, a restaurant and youth care center. Additionally for the Nazis who just aren’t feeling 100%, they offer testosterone boosters, which might also be useful for the individual who shot their own testicles at their facility.

Many see 88 Tactical as a clear front for the training of like-minded individuals with the common denominator of being white supremacists. The shooting range, 24/7 fitness center and training courses offered arguably support this with the common thread of training participants in different methods of combat.

The website for the company has released the list of all locations secured for a new venue, yet no information on when these facilities are to be completed. The two of most importance to the New College community are the planned Tampa and Fort Lauderdale compounds. The facilities which will be one and three hours away respectively are a scary reminder of the conservatism that runs rampant throughout the Sunshine State.

This isn’t a declaration of war, but the demonstrated organization of militant conservatives and the plans for expansion nationwide are quite foreboding. With plans for two facilities in Florida and four separate locations in Texas, this shows a desire for the consolidation of angry white conservatives who have a bone to pick with progressives and the LGBTQ community. Leftist Nebraskan news organization Seeing Red was quick to point out that high-level partner of 88 Tactical and trainer, Trevor Thrasher, was shown to be a fan of Kyle Rittenhouse on his Facebook, demonstrating the type of vigilantism their company seeks to foster.

This is a wakeup call to everyone lulled into a false sense of security by New College’s accepting atmosphere. Nazis have no place in Florida—yet, as of late, they have become more brazen than any WWII veteran could have ever foreseen them being in America. Don’t wait until the Nazis are organizing in Orlando again to see the problem and speak out.