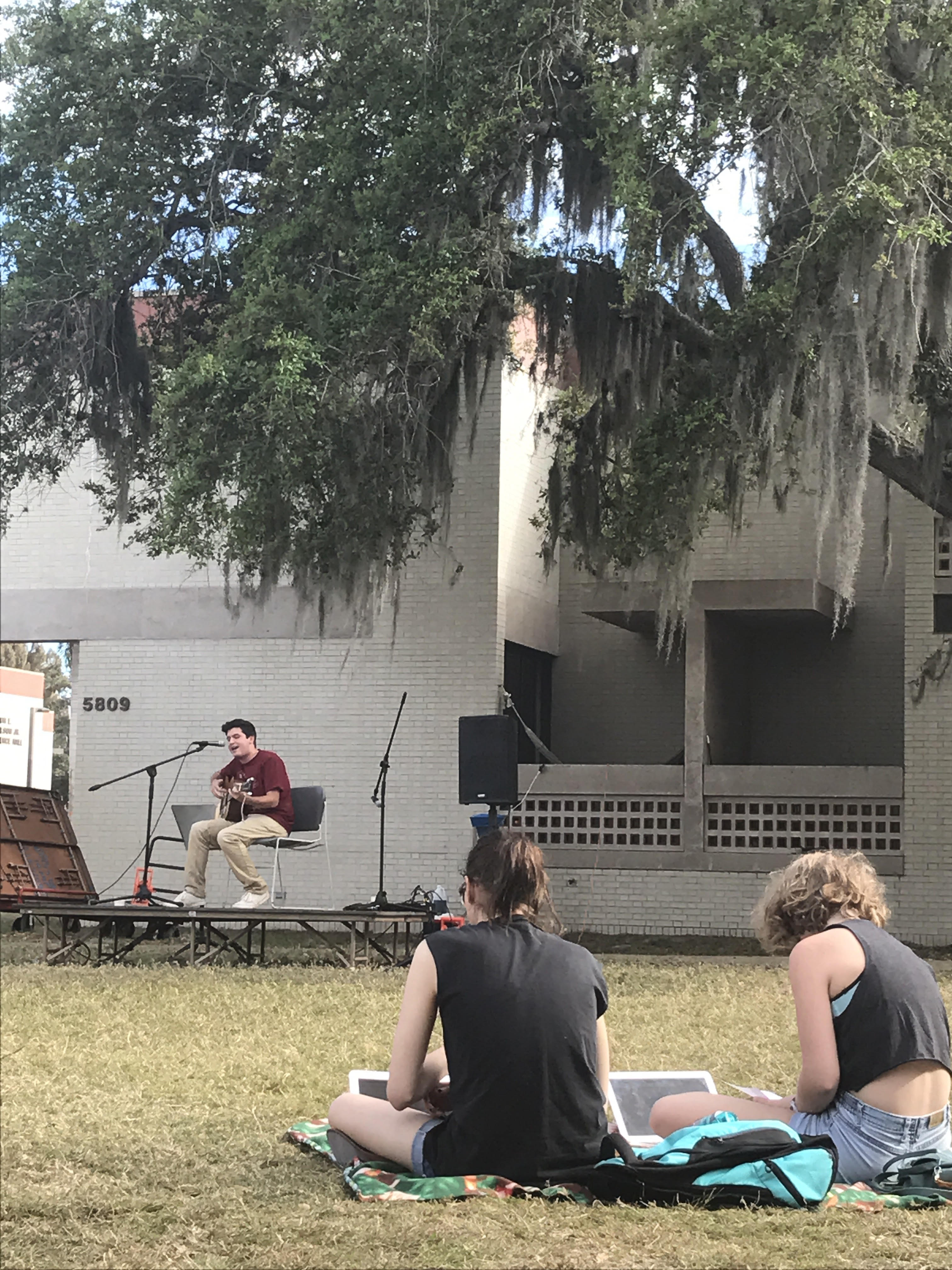 It was a relaxing sight: Z-Green scattered with students on a breezy Sunday afternoon. Bringing entertainment, music and overall good vibes to campus, New College’s talent show, “So You Think You’ve Got Talent?,” showed the positive impact that RA (Resident Advisor) events have on our community.

The talent show started around 4 p.m. on a small stage. The event was made possible by RAs, the second-years Matthew Bocanumenth, Jonathan Goodman, Zach Rahner, Erika Thompson and third-years Sean Bruneggman and Jewel Morrison.

To the far right of the stage, a table scattered with Publix fried chicken, Hawaiian rolls, tortilla chips, iced tea and veggies provided both refreshments and motivation to those who woke up just an hour earlier. The smell of free fried chicken also attracted some familiar furry friends, such as campus dog Blueberry.

After about three acts, it became evident that most of the performers did not show up. Though only a few of the original performers showed up, the show was saved by impromptu performances.

“We had 11 people officially sign up, and then we had five or more sign-ups that just showed up,” Thompson said.

Some of the impromptu acts included animal noises by second-year Harrison Reid, a long joke about a snake named Nate by first-year Rayne Craig and a lipsync performance by thesis student Oliver Goldsmith. Other acts included beautiful music, whether sung or performed on violin, cello or guitar.

“It was a nice Sunday afternoon outside, I really enjoyed it, I didn’t even plan on doing this,” second-year RA Paola Baez-Perez said.

“Just playing music and food, it brings people outside,” Thompson said. “I think more events should happen on Z-Green.”

The top three winners of the talent show will receive Visa gift cards. First place will be given $75, second place $50 and third place $25. These awesome prizes are made possible by funding that RAs receive for campus-wide activities.

“Each campus-wide event has a budget of $500 and so the only thing that we spent money on was food and the prize money,” Thompson said.

So have the winners been decided?

“Not yet, but they’ll be announced by the end of this week.”

Guess we’ll have to keep a lookout.