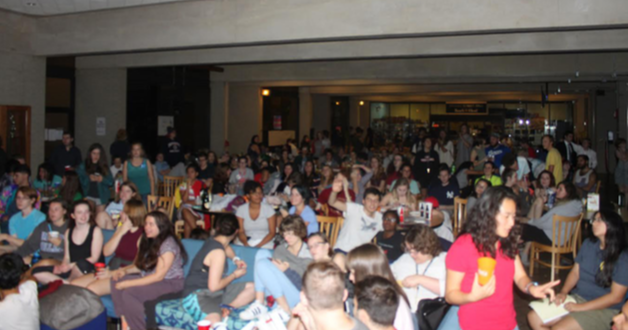 Nearly a hundred students gathered in Hamilton “Ham” Center to witness Donald Trump become the next president of the United States.

There are three things that bring New College students together (or draw them apart, depending on your perspective): forum wars, free food and election coverage in Ham Center. For the past year students have gathered in Ham Center to watch the presidential debates, yelling at the small television screen with people they usually only see on the overpass, drawn together by a mutual interest in the political system and perhaps a strong dislike of a certain candidate. That’s what happened Tuesday night as students settled in to watch who would become the next president of the United States.

“I can’t be that scared if everybody else is scared too,” second-year Anna Wichman said about the benefits of watching the election results with other students in the Ham Center.

Cheers rose around the room as it was announced that the second amendment on the Florida ballot that legalizes medical marijuana passed with 70 percent of citizens voting yes. An excited student took a bite out of a large styrofoam ‘Vote Yes on Two’ sign.

Amendment One, a deceptively anti-solar amendment, failed to get enough votes to pass. Professor of Political Science Frank Alcock lost the race for state senator to Republican Greg Steube.

By 8:30 p.m. Ham Center was as crowded as it is around lunchtime. Students sat at the tables around the cafeteria, chatting with friends and working on homework while periodically glancing up at the screen. As more polls closed across the county and more results rolled in the atmosphere in Ham Center became increasingly more anxious. Students exchanged worried glances across the room at friends. Laptops and books were put away as people began to devote their whole focus to the MSNBC coverage. A few lone Trump supporters sat in the crowd, keeping to themselves amidst several double takes at their shirts. The room was loud, crowded and provided a glimpse of the community of New College: friends gave each other comforting pats on the back, groaned at the television together and snacked on shared bags of chips and cookies.

“This is what democracy to me really is,” said Franklin Sklar, co-president of the Democracy Matters club on campus. “It’s a bunch of people getting together doing their civic duty, getting together to see that their vote actually matters, that even if their candidate doesn’t win, that they participated and they can see that when the results come out.”

[8:02 p.m.] The total electoral votes were 75 for Clinton and 66 for Trump. The atmosphere in Ham Center was one of hesitant confidence.

[8:08 p.m.] Senator Marco Rubio was projected to win the senate race in Florida. Groans were heard around the room. This would be just the beginning of a Republican landslide in Congress.

[10:05 p.m.] Trump led the race with 140 electoral votes to Clinton’s 104. Expletives were whispered under one’s breath and shouted to the room at large as confidence faltered among Clinton supporters.

[11:01 p.m.] Clinton won California, Oregon and Hawaii, passing Trump in the electoral race with 209 electoral votes to Trump’s 172. Ham Center erupted with cheers and the tense atmosphere lifted for a moment.

[11:30 p.m.] Trump won Florida, Utah and Iowa, surpassing Clinton in the electoral count. Second-year Emily Via speculated that votes for third party candidates handed Florida to Trump. “It’s making me angry, disappointed and really anxious about the Supreme Court justices and really anxious about the repeal of the recent legalization of same-sex marriage,” Via said. “Those are rights that I just got a year ago and I don’t want them to be taken away.”

No one seemed entirely sure what to do after Clinton’s campaign manager John Podesta urged supporters who had been watching coverage in the Jacob K. Javits Convention Center in New York City to head home, get some sleep and wait for the results to come in from other states that were still too close to call. Some students took this as their cue to gather up their empty Busch beer cans and walk back to their dorms. Others stayed put and decided to wait, spurned on perhaps by a miniscule sliver of hope.

“I have never felt nearly as afraid before as I do in this very moment,” said first-year Caitlin Zarzeczny in an email interview. “I am truly terrified.”

“As a person who recently is just coming out as a transgender male, I’m scared,” said transfer student Zig Ware in an email interview. “I’m terrified that I may not be able to receive the treatment I need to finally be at peace with myself.”

Around 3 a.m. Donald Trump became the 45th president of the United States and stepped onto a stage in Manhattan to give a victory speech to a crowd of ecstatic supporters.

Meanwhile, in Ham Center the crowd had dwindled from roughly 100 at its peak to around 20 students. The room was much quieter. There was less hope and excitement in the air, like there had been in the beginning of the night, but also less anger and anxiety, like there had been later in the night; there was just defeat and resignation.

The morning after election night was a silent one on campus, for different reasons than mornings usually are at New College. Ham Center was back to its normal state, as students ate breakfast quietly and watched the news coverage that continued to play on the television. Professors seemed to understand how many students felt that morning, pushing back deadlines and asking how everyone was doing at the beginning of class. Perhaps they felt the same sense of fear, dismay and sadness as many students did.

November 9th was a sad day for many, but it was also a day where people came together and showed love and support for one another. Students could be seen comforting one another outside of ACE after class. Friends embraced and cried. People called their parents and siblings. Life at New College, in the United States and in the world at large went on.

In Manhattan, president elect Donald Trump began assembling his choices for his cabinet.

Information for this article was gathered from clarityelections.com and nytimes.com.